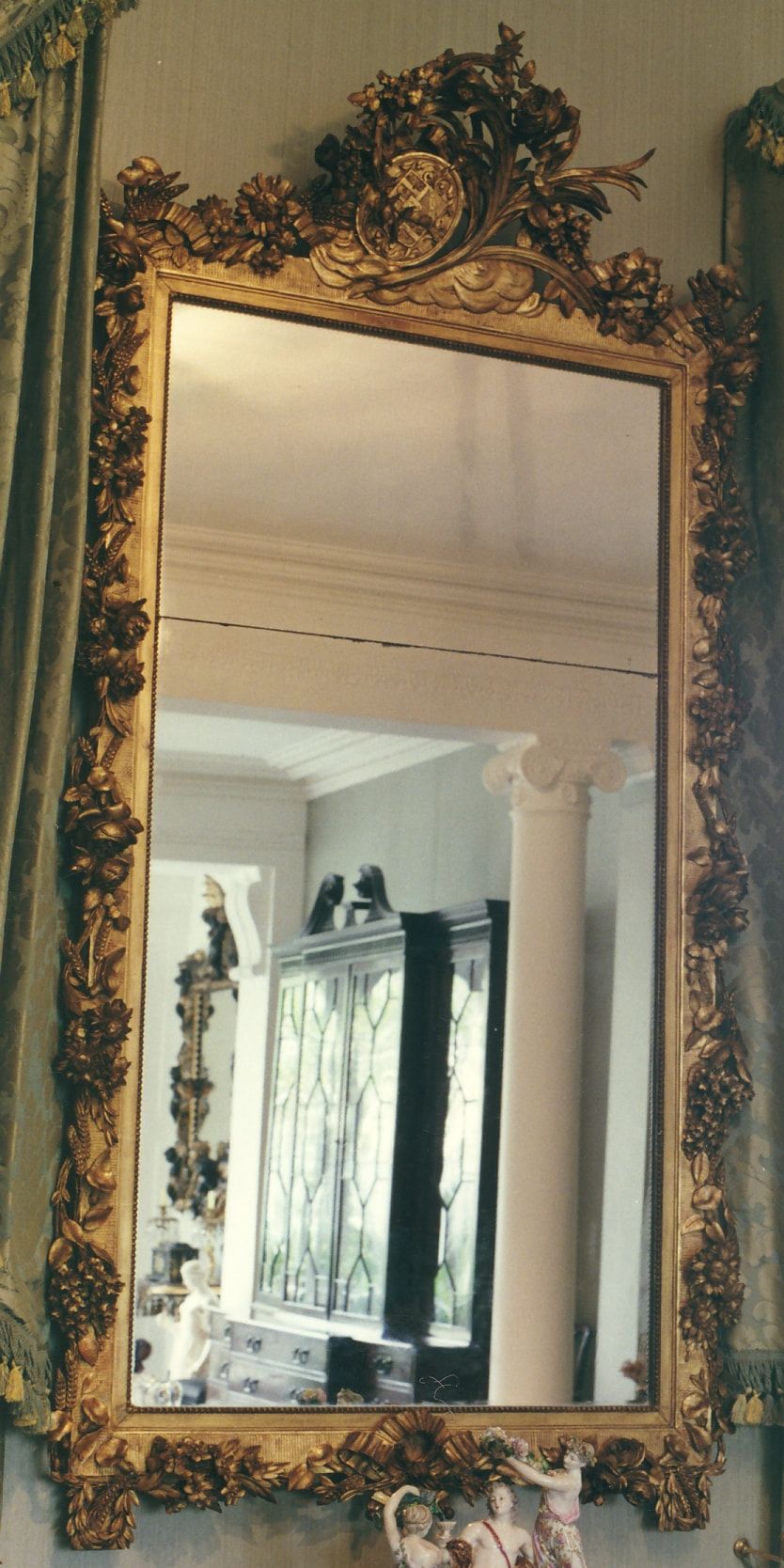 Usually when we look at a mirror as an object, we are interested in the style of the mirror and particularly its frame. There are a variety of styles and frames in The Johnston Collection, ranging from small timber framed mirrors, large gilded overmantel mirrors, gilded pier mirrors, to dressing mirrors and convex mirrors.

The rectangular cushion mirror has a deeply moulded frame in Pine, with a Walnut Oyster veneer finish. The bevelled glass is quite thin and may be original, with its silvering in remarkable condition. The much larger French carved and gilded mirror displays elements of both the rococo and Louis XVI (neo-classical) style, and is thus considered a transitional piece. The rectangular frame, beading and reeding are neo-classical; however, the asymmetry of the top and the extravagant embellishment with naturalist flowers in high relief demonstrates a strong rococo influence. Flowers featured include roses, sunflowers, daisies, lilac and convolvulus.

It was during the 18th century that the French perfected the technique of casting large sheets of plate glass and largely ousted the Venetians from the monopoly in mirror-glass which they had enjoyed during the previous two centuries. Most of the large plate mirror-glass in English great homes of the early and mid 18th century was from France, often smuggled. It was not until the establishment of the British Cast Plate Glass Company in 1773 that reliable plate was produced for the local market, with the first successful large sheet of mirror-glass installed in Mrs Child’s bedroom at Osterley Park in Middlesex in 1776.

If, rather than focusing on the style of the frame we look at the mirror-glass, we of course see ourselves, which is why several of The Johnston Collection’s mirrors will be seen in our Gallery from March to June this year in an exhibition entitled Pride & Ornament: The Folly of Vanity. For better or worse, people have been viewing themselves in mirrors since antiquity. Has this opportunity to concentrate attention on superficial appearances been good for us or not?

Visit Pride & Ornament and discover 18th and 19th century views on this conundrum, illuminated not only through mirrors, but through paintings, patch and snuff boxes, costume, furniture, silhouettes and prints.

This article was originally published in Fairhall, Issue 5, March 2012, pp 9.