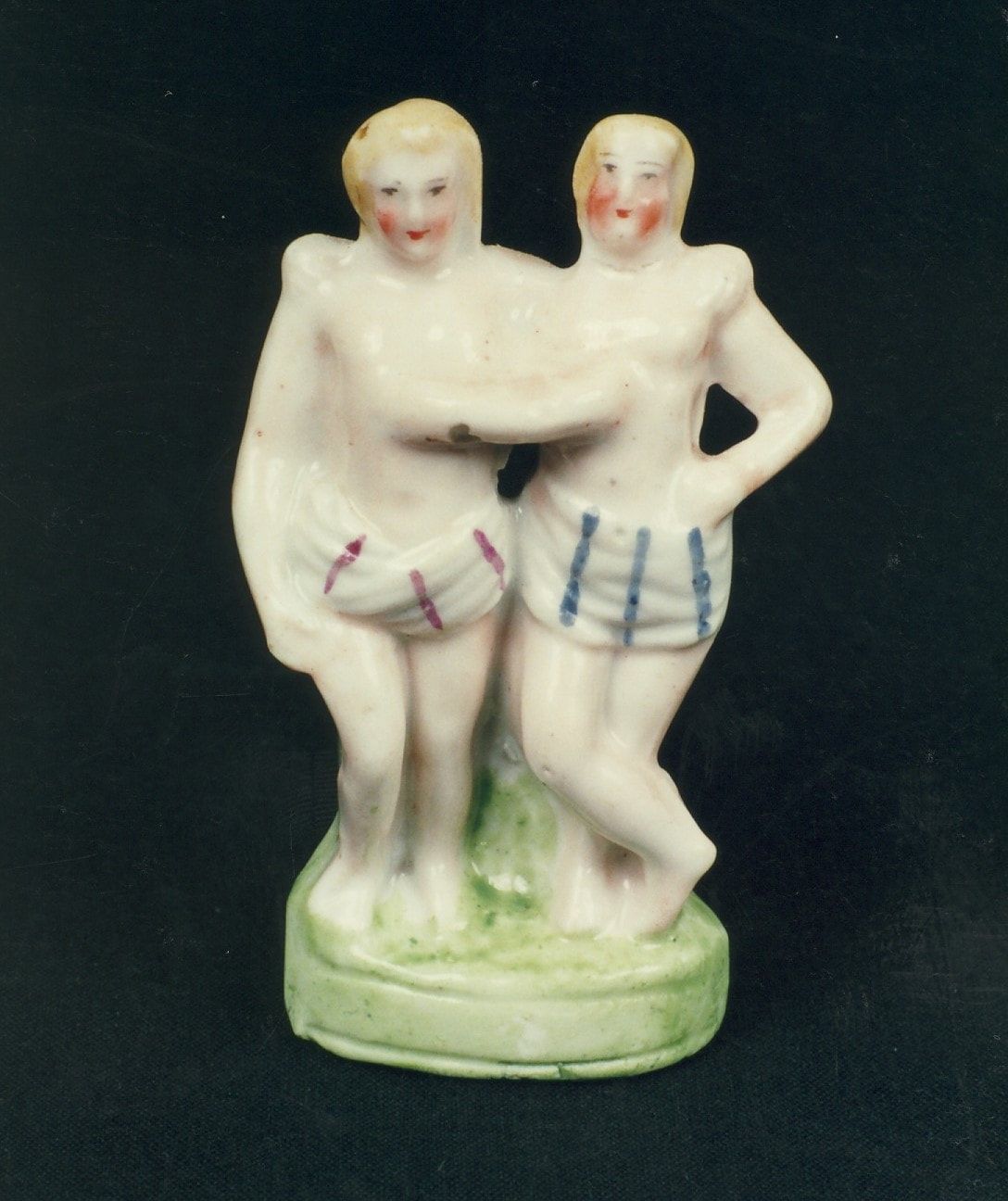 Whenever we think of or hear the words Siamese twins many of us will be reminded of Chang and Eng Bunker (1811-1874), the conjoined twins who caused such a world-wide sensation.

Chang and Eng were immortalised on prints, posters and by potteries, ceramic figurines, were possibly mementos for those who visited their shows and exhibition events. But how did they become the phenomena that took the 19th century world by storm?

Chang and Eng were born on the floor of a fishing boat in Siam (now Thailand) in 1811 to a Siamese / Chinese mother and Chinese father. Twins were quite an oddity, but conjoined twins were unheard of and consequently the villagers had mixed feelings, feeling the twins were a bad omen and should be put to death. Thankfully for the boys, their mother was determined they would live and as they grew always told them they were blessed.

The twins were joined by a ligament, the size of a wrist, by bone cartilage with connecting vessels. Many medical practitioners felt they could be separated, coming up with varied ideas on how this could be achieved, all of which their mother rejected. The tragedy of their lives, although being conjoined twins might also be viewed as the means to a unique existence, was that they were joined together by a relatively small band of cartilage at their sternum. Their completely individual livers were hepatically connected and they shared a very minimum of blood. Today their separation would be a rather simple procedure and even in those days a possible one.

The first few years of their lives was uneventful until 1819 when a cholera epidemic hit Siam killing their father and five of their brothers and sisters; the funerals taking most of the life savings of the family.  So, from the early age of eight they eked out a living selling duck eggs; they also trained and looked after ducks and other animals.  They had become the breadwinners of the family and despite their age did very well.  Their notoriety spread across the country and King Rama III (1788-1851) invited them to the capital to take a tour of the royal palace.  During that visit to the king, they were given all sorts of gifts and met many dignitaries, sending what they could back to their family.

Their father had been a fisherman and they had become great swimmers. The twins peculiar swimming action came to the attention of Scottish merchant trader, Robert Hunter, who was based in Bangkok. Hunter and his family operated four ships trading between Siam and Singapore and he was awarded the powerful position of harbour master which meant any overseas trade had to come through him. Hunter attempted to use his influence to convince King Rama III to allow the twins out of the country supposedly to be assessed and observed by a medical facility, but the King would not agree, adamant that they were the property of Siam.  Intermittent wars with Burma, skirmishes with Cambodia and Vietnam’s colonising attitude to deal with, possibly encouraged the King to entrust the twins to Hunter and his associate Captain Abel Coffin.

They arrived in England with Hunter and Coffin and appeared in Astley’s Amphitheatre in London.  In 1829 the twins were exhibited in Bullock’s Egyptian Hall on Piccadilly which held many spectacles to satisfy Londoners’ curiosity regarding other lands and cultures. As conjoined twins from the Far East they were the source of much curiosity, and several prints were produced depicting them playing badminton, chess and other pastimes.

In 1832 they realised that their manager, Captain Coffin, was taking most of their profits, and made a separate arrangement with the circus owner Phineas T Barnum with whom they toured until 1839. While their original managers took up to 90% of the profits for themselves, and travelled in first-class, resigning the twins to the freight area, once they broke free from that indentured servitude, they accumulated a small fortune from their hard work and frugality.

Eventually, tired of the constant travel and the lack of a home base, the twins made the decision to retire from performing and settle down.  They took the name of Bunker, bought land and grew tobacco in the pre-Civil War south in Wilksboro, North Carolina.  The twins were successful and eventually came to the attention of two sisters, Adelaide and Sarah Yates.  Marriage was barely an option, frowned upon by the sisters’ father and southern society – not because they were conjoined twins but because of their Asian background – inter-racial marriages were unheard of and scandalous.  But they were rich, practising Christians, and respected in the community and the couples went on to produce 21 children.

Sadly, the American Civil War saw them lose their fortune and forced them back on the road to tour in England, Europe and Russia.  The twins were now much older and found the return to exhibiting themselves taxing which possibly led to Chang’s stroke. Though he survived, this marked the downwards progression of their lives.  In 1874 Chang became ill and did not recover, his brother dying within hours.  Their legacy is vast, not the least their 1,500 descendants –and as little fairings, like the one in the Collection (A0235-1989).