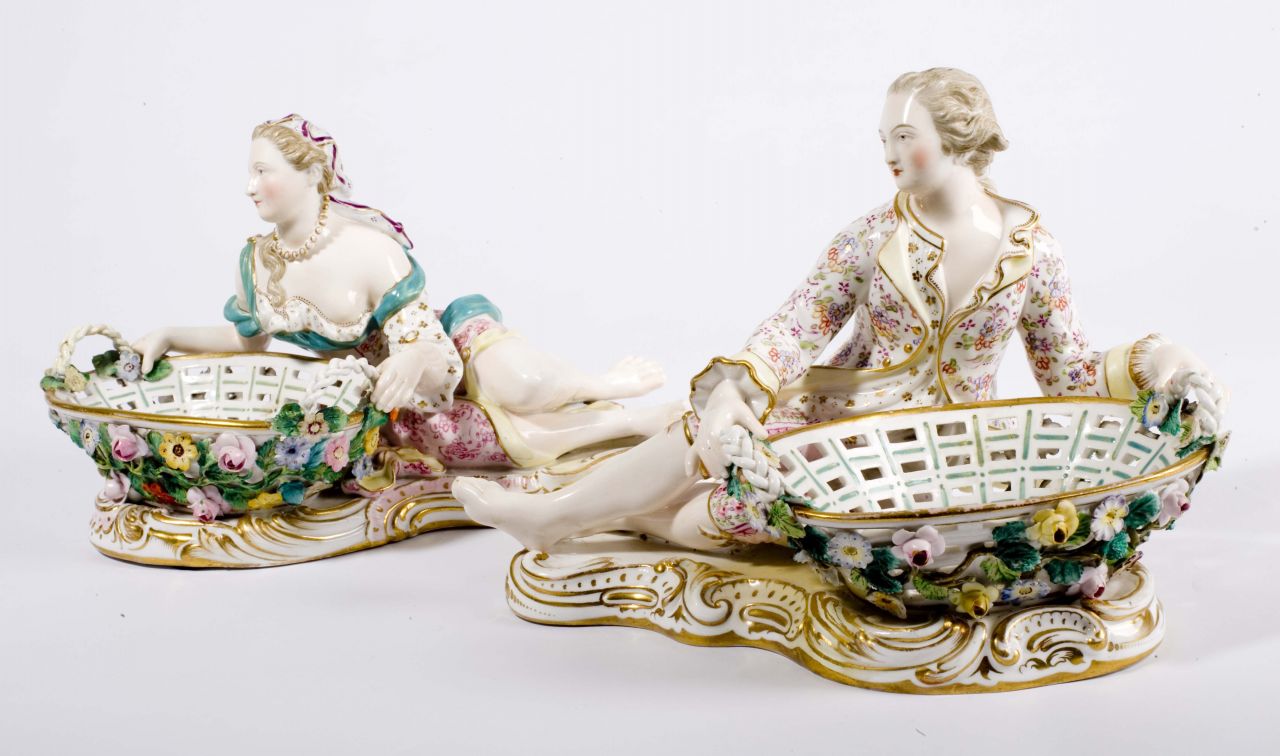 My daughter, a friend and I spent an afternoon touring the Meissen porcelain factory and had dinner there that evening.

A personal tour with an English-speaking guide was well worth it; this was pre-booked and additional to an audio guide that accompanied an introduction to the factory, its history and viewing hand-painting of porcelain pieces. After the guided tour, we visited their extensive retail shop where even browsing is an extension of the Meissen experience.

A memorable start to the dinner was a red wine aperitif served in a drinking key, a porcelain vessel adapted from a larger version used in the 16th to 19th centuries for distinguished guests in various ceremonies. The drinking vessel came from the Albrechtsburg castle in Meissen where the Manufactory was first set up in 1710 by Augustus II the Strong (reigned 1694-1733).

In 1714, Johann Jacob Irminger (1645–1649) designed a drinking key (Trinkschlüssel) with ivy leaf decorations applied in relief, in Böttger porcelain (Böttgerporzellan), so named in recognition of Johann Friedrich Böttger’s discovery of hard[1]paste porcelain. Augustus II the Strong put Böttger (1682-1719) under house arrest until he could show the king how to turn base metals into gold. Instead, his discovery of hard-paste porcelain won him his freedom. The key from 1714 was at least 150 mm long, compared to the 100 mm one used to serve our aperitif.

The dinner was a 3-course meal served on Meissen dinnerware spanning three centuries. We were greeted with a table set with fresh flowers, Meissen figurines at least a foot high on either side of our rectangular table, a footed compote dish with three kinds of bread, three flavoured butters on bread plates and dinnerware from the all-white Swan Service.

Porcelain figurines were used as table decorations since the 1730s, when they superseded the sugar sculptures that appeared during dessert courses. (Sugar sculptures originated from Italy in the 16th century). Popular traditional themes for these figurines were aspects of court life ranging from the theatre to hunting.

However, a break from tradition is the novel use of the compote dish as an elegant bread basket. These footed dishes that combined a pierced basket weave design alternating with medallion-shaped cartouches were a Meissen design since the 19th century. The cartouches could contain hand-painted decorations such as fruit, flowers, or even butterflies.

The first course was served on the Swan Service designed by Johann Joachim Kändler (1706-1775) in 1737 on commission by Heinrich, count von Brühl (1700-1763), August III the Saxon’s Prime Minister who later became the supervisor of the porcelain manufactory. The original service for 100 people was comprised of over 2200 pieces, making it the most extensive porcelain service in the Baroque period, requiring over five years to complete. The design which included rippling water, swans, water nymphs and shell motifs was entirely in porcelain relief and emphasized lavishness and craftsmanship. With the entire surface of the plate filled with ripples and relief work, the unevenness made this dinnerware difficult to eat from and hence it did not seem practical.

An amuse bouche was served on a tiny dish in the Wave pattern, set atop a round tissue liner. (The tissue liners were available for sale at the Meissen shop; it was only when I saw how they were used did I realise I missed the opportunity to purchase some!) Succeeding courses were set atop this Swan plate.

The main course was served on the full green wine wreath service (Voller grüner Weinkranz) by Johann Samuel Arnhold (1766–1828) from 1817 during the Biedermeier period (1815- 1848) where the arts were more accessible to the growing middle class. In this motif, green symbolised life and hope; wine, vitality and the wreath, eternity. This design from the 19th century is an enduring and practical design with underglaze painting making this service dishwasher-safe.

The dessert course was served on the ‘Woodland Flora’ pattern of the Wave (Wellenspiel) service, a contemporary pattern from 1996 that was developed over three years by Sabine Wachs (b. 1960-). With 39 pieces, the cups and teapots have large, circular handles that make them practical to use; they can be gripped firmly and handled with ease. Although they appeared free-form and informal, the floral painting was of high quality and had an understated elegance. Painting over the ridged surface is also particularly challenging and attests to the skill of their craftsmen. Designs executed ranges from single-petalled roses, blackberries, rosehips, and lilies of the valley to hazelnuts and poppies.

Throughout dinner was a presentation on how people dined on festive occasions through the centuries with information about Meissen porcelain. It covered the historical importance of sugar and the tax imposed on it as well as dinner service à la Russe or à la Française. Since it was entirely in German, I would normally regret failing to capture nuggets of social history. But it was not the case on this evening since there was plenty on the dinner table to occupy the senses.

The quintessential Meissen experience starts with some planning. Before firming up any travel dates, the Meissen website provides some options on what one can do when visiting the Manufactory, which is how Meissen refers to its porcelain factory. The “Table and Dining Culture” offering involves a 3-course dinner every second Saturday of the month, except December, at 6:30 pm) whilst an afternoon of tea, coffee and chocolate, the three historically exotic drinks for which Meissen developed specific wares for, takes place every third Sunday of the month. With both events about a week apart, one could attend both by scheduling other activities in between.

This article was originally published in fairhall, issue 26, March 2019, pp 8.