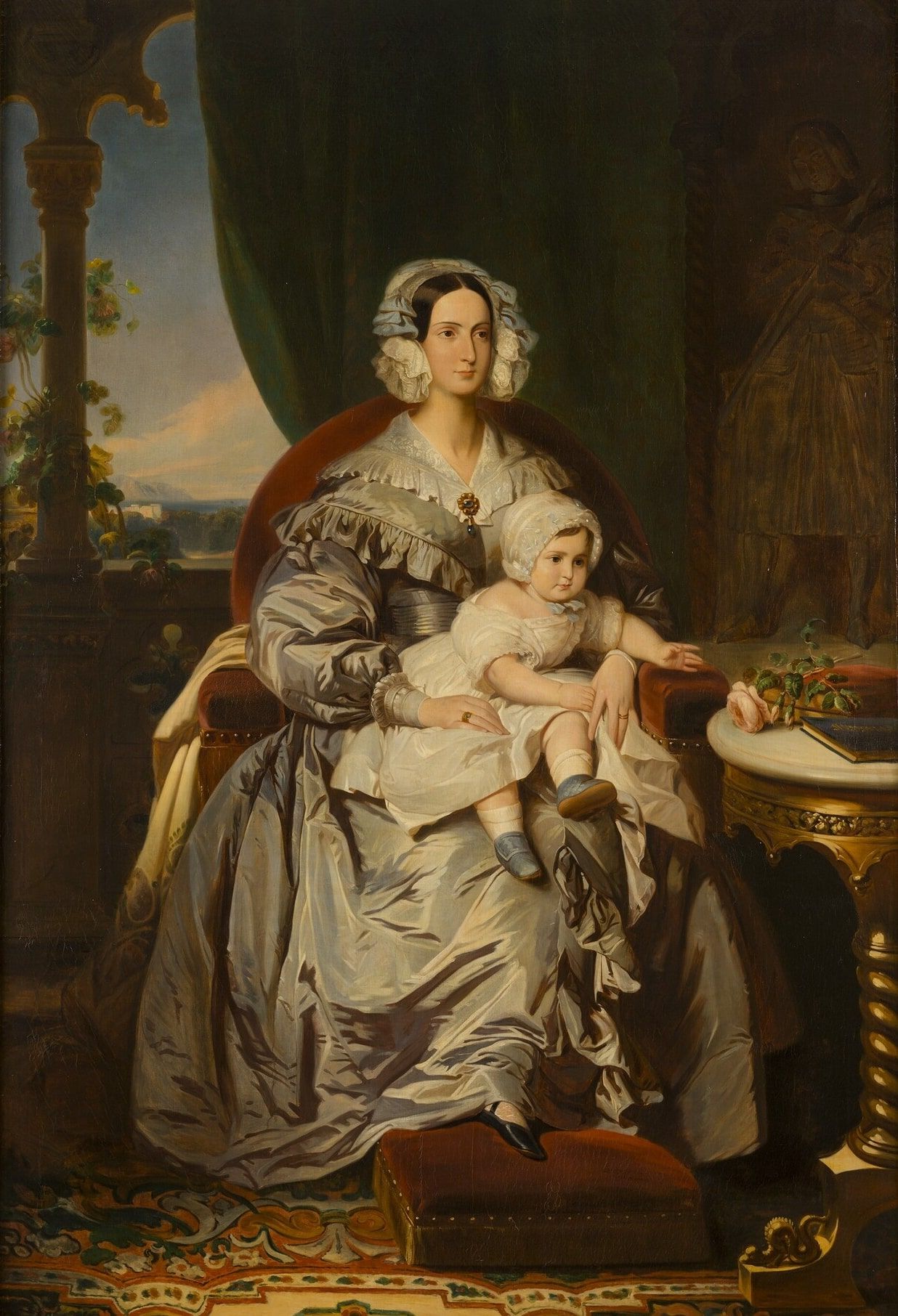 Upon his arrival in Paris from Germany in December 1834, the then twenty-nine-year-old Winterhalter focused on establishing a career as an elite portrait specialist.

He initially relied on the patronage of his German connections and submitted to the Salon (an annual contemporary art exhibition) portraits of the Berthier de Wagram, Planat de La Faye, and Tascher de La Pagerie families, who were prominent both at German and French courts. By the middle of the 1830s, Louis-Philippe, King of the French, was in the market for a new court painter. Together with his family, the King was a regular visitor to the Salon, where, undoubtedly, he discerned the quality of likeness that Winterhalter had attained in the portraits of his courtiers. The art historian Richard Ormond termed the King’s decision to entrust portrait commissions to the then relatively unknown Winterhalter as ‘the royal nose for talent.’

Portraits of the King’s married daughters were among the earliest commissions received by Winterhalter. This painting represents Louis-Philippe’s second daughter, Princesse Marie d’Orléans, who, by the time the portrait was commissioned, was living in Germany with her husband, Prince Alexander of Württemberg. Winterhalter constructs the royal image with elegance and dignity. The princess is painted seated, life-size, and at full-length. She wears a voluminous lilac gown of watered silk with puffed sleeves and lace collar; the costly cashmere shawl is thrown carelessly over the arm of the throne-like chair. The garments, plush and gilded furniture, richly-patterned carpets, drawn curtains and a landscape vista would have been read by the nineteenth-century audience as indelible markers of the sitter’s upper-class status.

However, the artist avoids overburdening the composition with royal grandeur. The portrait reflects that in France, following the Revolution and especially during the July Monarchy, royalty and aristocracy eschewed conspicuous display of wealth. Instead, the emphasis in their portraits shifts to their universal and aspirational qualities. This portrait, for example, shows the princess as an exemplary wife and mother. Instead of an evening gown, which would have called for a plunging décolleté and sumptuous jewels, she exudes spousal modesty by wearing a demure day-time garment with covered shoulders and long sleeves. Instead of a coronet, an elegant lace-and-silk headdress indicates her status as a married woman. The embellishments are minimal, consisting of a brooch and a wedding ring.

Marie’s son, Prince Philip of Württemberg, is the focal point of the composition. The caring and protective way in which she steadies him on her lap may indicate that the French and Württemberg royal families advocate the teachings of the Enlightenment philosophers who called for a closer involvement of upper-class parents in education and upbringing of their children. Secular portraits of mothers and sons echo the iconography of the Virgin and the Child. Religious connotations were especially apt in royal representations as a reflection of their traditional role as upholders of the official church of their realm. This connotation is especially important in the context of this royal portrait as it would have reminded the viewers of the princess’s exemplary piety: even though she had married a Protestant, she kept her faith and obtained the right to raise her child as Roman Catholic.

The portrait illustrates the fulfilment of traditional expectations placed upon members of royal families to secure politically and dynastically motivated marital unions. The viewing public would have been only too aware of the challenges that Louis-Philippe, King of the French, faced in finding suitable spouses for his children. Because the King did not inherit the throne in a traditional way but accepted the crown from the provisional government of the 1830 Revolution, a number of royal dynasties refused to form marital alliances with the ‘new’ French royal family. The marriage between Princesse Marie d’Orléans and Prince Alexander of Württemberg was considered, therefore, a dynastic coup as the prince came from an ancient dynasty and was closely related to the respected German ruling houses and the reigning families of Britain, Belgium, Portugal, and Russia.

A bronze statue of Joan of Arc (seen in the upper right-hand side of the composition) is among the most curious objects in the portrait. Also known as the Maid of Orleans, she was the patron saint of the princess’s family, the Orléans dynasty. By the nineteenth century it would have been most unusual to include a patron saint in a secular portrait. However, the research has uncovered that the author of the sculpture is none other than the sitter herself. Studying fine arts was an important part of the upper-class curriculum, and works by the members of the French royal family bear witness to their above average talents. Given the conventions of the era, it would have been inconceivable for members of upper-class families to pursue art professionally. Although the princess enjoyed the benefit of being tutored by some of the most respected artists of the era, her sculptures were produced for the exclusive audience of her family and friends.

Portraits were frequently commissioned to represent the loved ones in absentia. By the time this portrait was completed, it also became a memento mori. The princess died following a chest infection at the age of 25. Winterhalter’s portrait became a fitting tribute to the woman, the mother, and the artist. Copies of the portrait were placed in royal residences and presented to grieving relatives abroad. The statue of Joan of Arc came to represent not only the dynasty but also the spirit of the talented young woman whose life was cut short. Casts and copies of the statue, in marble, plaster, silver, and bronze, are to be found today in public and private collections throughout the world. A version of the portrait and a cast of the statue are lovingly preserved to this day by the present-day members of the Württemberg royal family, who descend directly from the princess and the infant child on her knees.

above | Franz Xaver Winterhalter (German, 1805-1873) Portrait of Marie d’Orléans, Princess of Württemberg, with her son, Prince Philip of Württemberg, circa 1839 oil on canvas collection of the Musée National du Château Versailles (Public Domain)