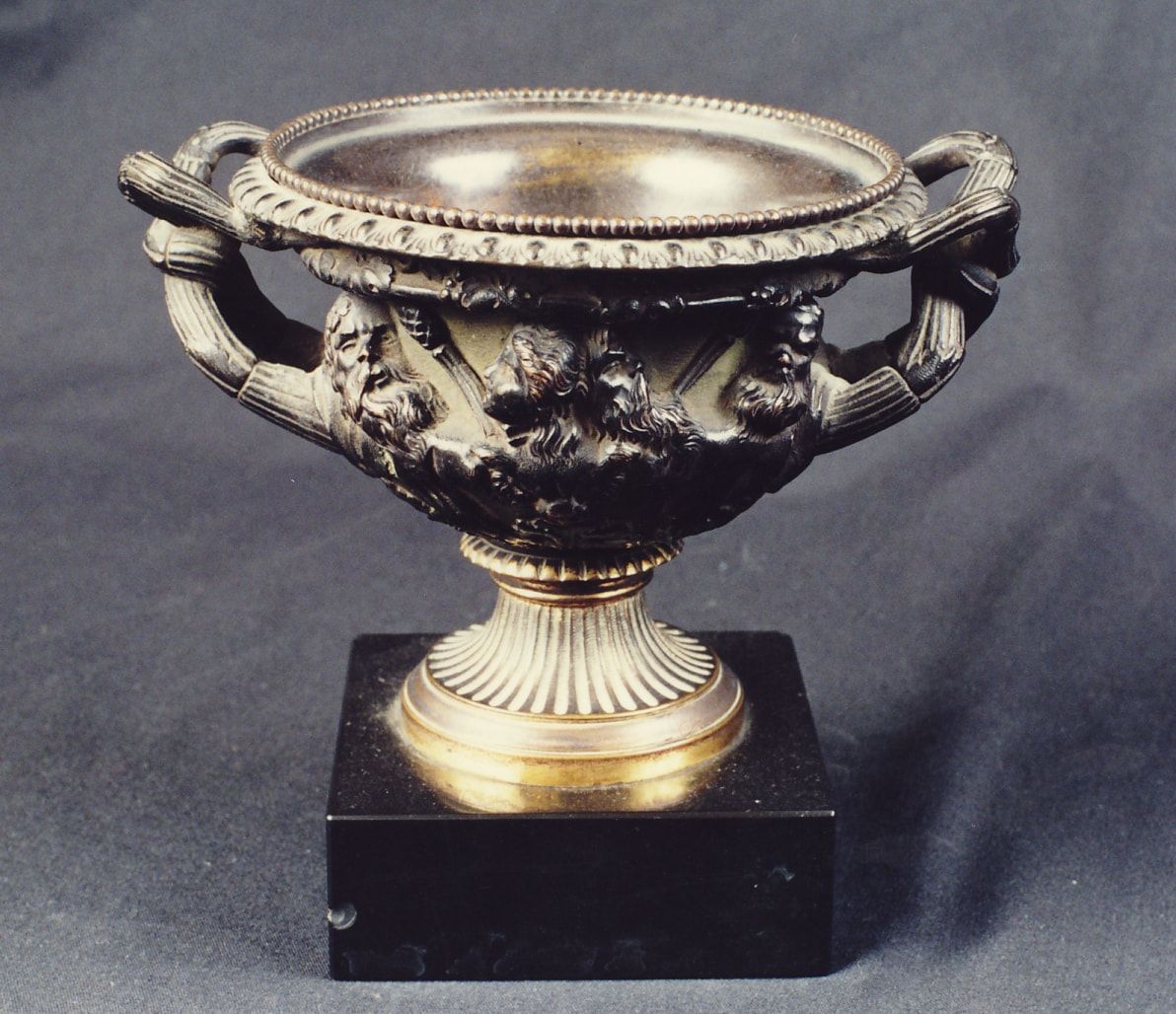 “I built a noble greenhouse, and filled it with beautiful plants. I placed in it a vase, considered as the finest remains of Grecian art extant for size and beauty.”

These words were said by George Greville, Earl of Warwick when he unveiled the so-called Warwick Vase, of which a bronze copy is part of The Johnston Collection.

The story began as fragments of an ancient roman marble vase with Bacchi ornament found at Hadrian’s Villa, Tivoli about 1771 by Gavin Hamilton, a Scottish painter-antiquarian and art dealer. Its story ends in the grounds of the Burrell Collection near Glasgow in Scotland.

During the 18th century, the Grand Tour became the necessary complement to a refined education of the younger members of English society. As a result, a regular trade and supply for antiques grew rapidly. Hamilton’s business was to sell busts and statues so, having gained permission from the owner, Hamilton’s excavation of the lake and swamp at Hadrian’s Villa found 45 marbles and a vast quantity of fragments. Accounts differ as to the state of the vase when discovered at this excavation, but it is agreed that the vase was missing both the foot and the base and at least one head was missing. The cost of restoring it was beyond Hamilton, so he sold the fragments to Sir William Hamilton, British envoy at the court of Naples. Sir William was renowned as one of the foremost collectors of the time, having already begun his famous museum of vases, terracotta, bronzes, ivories, gems, coins etc., known as the ‘Etruscan Vases”.

Sir William immediately took on the restoration of the vase, first having had a large piece of marble cut at Carrara to repair some of the damage. Giovanni Battista Piranesi had made preliminary sketches and etchings of the fully restored piece. A Piranesi etching of The Baths of Caracella (A0163- 1989) is part of The Johnston Collection.

“Keep it, I cannot, as I shall never have a house big enough for it.”

Hamilton first offered the restored vase to the British Museum who rejected his offer so he sold it to his nephew, George Greville, 2nd Earl of Warwick who was renovating Warwick Castle, with no expense spared. The vase was placed on the lawn in front of the Castle before the greenhouse was built to protect what is generally considered a largely 18th century work with “a few ancient portions inserted here and there”

Widely admired for its rich ornament and form, many copies were made. Pottery, porcelain, marble, Sheffield plate, bronze and silver were all used to replicate the vase. Two full size bronze copies were made and one can be seen at Windsor Castle growing flowering plants. The other one is at Cambridge University. The Norman Brookes Challenge Cup which is presented to the winner of the Australian Open tennis tournament is modelled in silver and based on the Warwick Vase. The miniature version (A0657-1989) in The Johnston Collection is made from bronze.

In 1978, the vase was sold to Metropolitan Museum of Art in New York. However, it was declared an object of national importance and an export license was delayed. It was not considered of sufficient archaeological value for the British Museum, so ended up at the Burrell Collection, Glasgow where it now can be seen in a courtyard setting.

Sir William Burrell (1861–1958) was a Scottish shipping merchant and philanthropist. After his father’s death, he and his brothers developed the technique of ordering modern, advanced ships at rock bottom prices when the market was in a slump. When the market recovered, they sold them at a large profit. This enabled him to become enormously wealthy, allowing him to concentrate on collecting art and antiques for which he had an eye for detail and an astute eye for opportunities. He loved a bargain. In 1927 he was knighted for his services to art, and in 1944 he donated 8,000 items to his hometown of Glasgow, with private funding for a new museum. Just as William Johnston had stipulations on how his collection was to be viewed, Sir William wanted a rural setting, away from the pollution of Glasgow as he was concerned about the carpets and tapestries. Sir William died in 1958, aged 96. It took the council until 1983 to acquire a suitable site, Pollock Country Park. A custom-built museum, the Burrell Collection was finally opened in 1983. At present, the Collection is closed for refurbishment and is due to reopen in the spring of 2021.