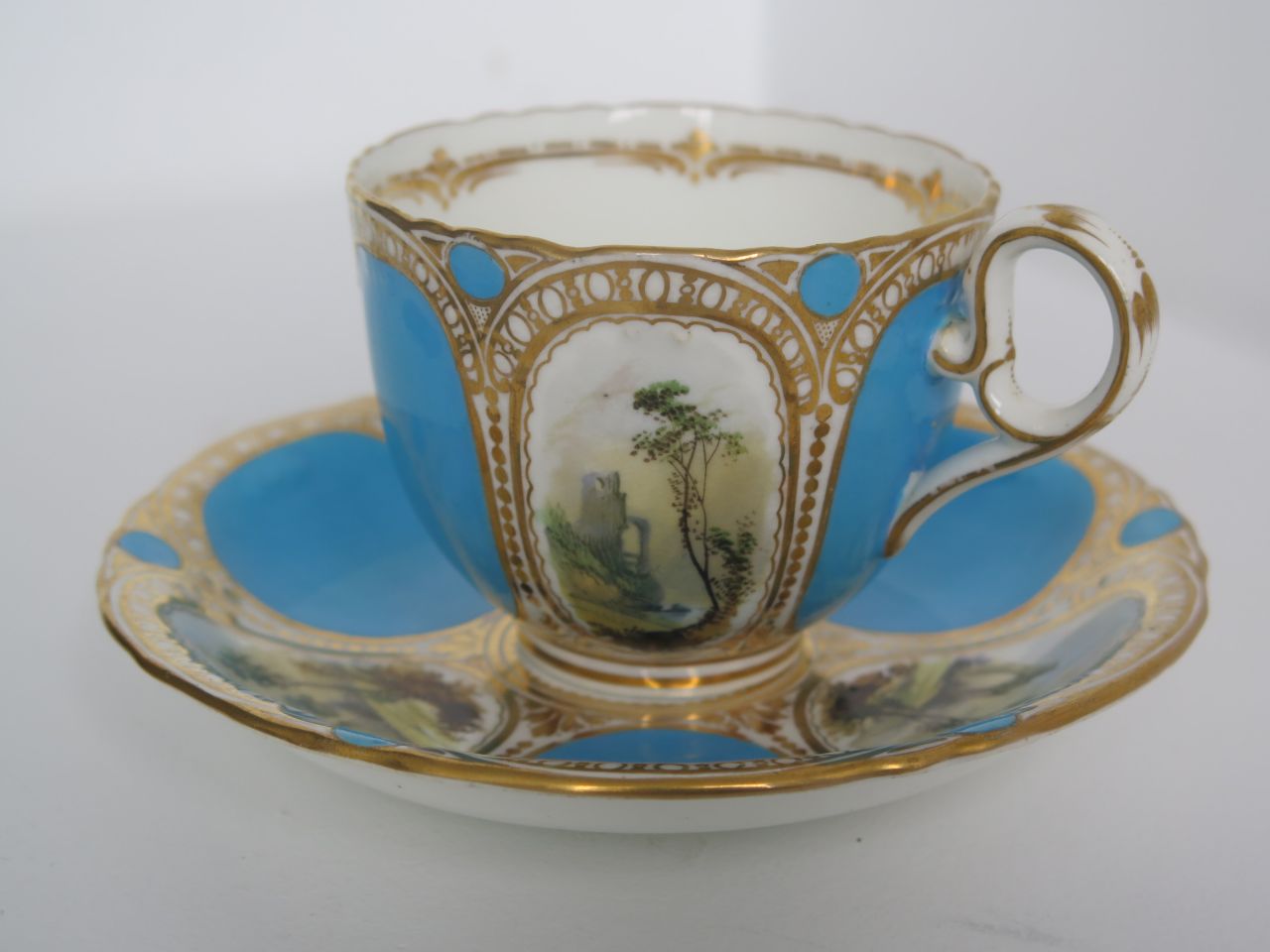 One of the most attractive items of porcelain in The Johnston Collection is a trio of a coffee cup, tea cup and saucer (A1305-2013) decorated with hand-painted multi-coloured landscapes alternating with solid turquoise-blue circles, each surrounded and embellished by exquisite gilding.

It is part of a significant bequest by Mrs Alwynne Jona OAM, and is believed to be made by the Coalport porcelain factory. Other items in the Collection include a pair of floral[1]encrusted cornucopia-shaped spill vases (A0413-1989) marked Coalbrookdale. These two important acquisitions are not only in sharp contrast – the first representing elegance and refinement, the second an example of the flamboyance of the Rococo – but are also an indication of the variety of wares produced by the so-called Salopian potteries in the mid-19th Century.

Coalport (Salop) and Coalbrookdale – two placenames associated with the same firm - are both located near the Severn River south of Telford in Shropshire. While the earlier history of ceramics manufacturing in this area is clouded, it is clear that the young farmer’s son John Rose (1772-1841), having been trained as a potter, became one of the most important entrepreneurs in that part of England. In 1797 he formed a partnership which prospered to the extent that within two decades it had absorbed two rival firms – the Caughley works from Thomas Turner in 1799 and in 1814 the nearby Anstice, Horton and Rose company which at that time was separated from Coalport by a narrow canal. He also acquired designs from the innovative Nantgarw and Swansea potteries and formed an alliance with the creative designer William Billingsley (1758–1828). Thus Coalport–Coalbrookdale porcelain became what Geoffrey Godden described as among the most interesting and decorative of all English ceramics.

The first Coalport items were probably Chinese-style blue and white porcelain with a relatively hard, heavy and thickly-potted body similar to that being produced by many rival firms in the late 18th and early 19th centuries. However, after 1814 when the Caughley Porcelain Factory was closed, there was a move to the thinner and more refined soft-paste (or bone-china) body with a warm glaze and more varied decoration, often with a Dresden influence. Throughout this period production focused on tablewares, dessert and tea services, footed bowls, tankards and honey pots plus ornamental items such as vases and jardinières. The many competitors included Flight & Barr at Worcester, Spode and Minton.

In 1820, Rose & Co was awarded a gold medal by the Society of Arts for introducing a lead-free feldspathic glaze, resulting in some good publicity and heightened popularity. From the 1820s the Rococo influence led to some of Coalport’s most popular work, including vases and other items beautifully decorated with encrusted flowers and marked “Coalbrookdale”. Further market exposure came with the Great Exhibition of 1851 when Queen Victoria bought a table service with Mazarin blue borders for presentation to Czar Nicholas I of Russia. The Rococo style went into decline in the 1850s to be replaced partly by the Sèvres influence with natural subjects and landscapes favoured by the growing middle class.

After John Rose’s death in 1841 the factory continued in operation, and under the former name “John Rose & Co.” the company passed to John’s nephew, William Frederick Rose, along with Thomas Rose, William Pugh, and Charles Madison, followed by other proprietors. In 1926 the enterprise moved from Shropshire to Staffordshire and after further changes in ownership was absorbed by The Wedgwood Group in 1967, thus ending its long and illustrious history.

Identifying and dating pre-1850 Coalport–Coalbrookdale presents a real challenge for collectors because most of the early items were unmarked or carry marks that are puzzling. However, items often carry a pattern number and when matched with decoration and shape this can be the key to dating. Fortunately, marking increased as the 19th century wore on.

The best source of information on Coalport and its cousins can be found in Geoffrey Godden’s definitive work, Coalport & Coalbrookdale Porcelains first published by The Antique Collectors’ Club by Herbert Jenkins, 1970.

This article was originally published in fairhall, issue 22, October 2017, pp 11.