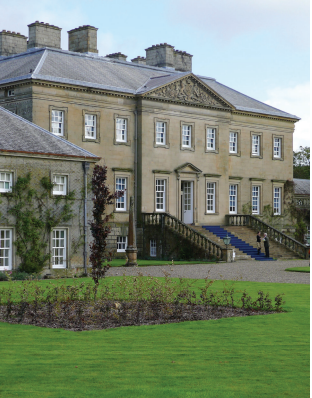 2018 marked the tercentenary of the birth of iconic English furniture designer, Thomas Chippendale (1718-1779). Dumfries House contains a unique collection of more than fifty pieces by Chippendale.

The characters in the recent history of Dumfries House read like the dramatis personae in a country house murder mystery: a prince, a racing driver, and two prestigious London auction houses. Happily, there was no ‘Miss Scarlet in the library with a revolver’. There was, however a magnificent rosewood Chippendale bookcase in the drawing room, valued at £20 million.

From several perspectives, Palladian mansion Dumfries House, Ayrshire, Scotland, is particularly significant. It was the first major house designed by influential Scottish architect and designer, Robert Adam (1728-1792). Adams’s distinctive neoclassical aesthetic is apparent at other surviving English country houses including: Harewood House, Osterley Park, Kedleston Hall, Syon House, Nostell Priory, and Kenwood (which will be featured in future issues of Fairhall). Second, William Crichton-Dalrymple (1699-1768) the 5th Earl of Dumfries, entrusted furniture designer Thomas Chippendale (1718-1779) with his first major commission. Lord Dumfries personally visited Chippendale’s London showrooms in 1759, and his purchases are fully recorded in rare original bills and numerous inventories. Many of the pieces ordered for Dumfries House are illustrated in Chippendale’s iconic volume of furniture designs, The Gentleman and Cabinet-Maker’s Director, first published in 1754. Third, nearly 250 years later in 2007, more than fifty of these early Chippendale pieces were still preserved intact at Dumfries House. They remain there today, but the story could have been very different.

In 2007, Dumfries was owned by John Crichton-Stuart (1958 -) 7th Marquess of Bute. He was then better known as John Bute or Johnny Dumfries, a racing driver who had competed with Team Lotus in Formula 1 and had been victorious for Jaguar in the 24 Hours Race at Le Mans. After unsuccessfully offering Dumfries House to Scotland’s National Trust for Scotland, the house was scheduled for sale by Savills, with its contents ready to be auctioned by Christies. Every furniture piece had been handsomely catalogued by Christies, and the sale of the house and its 2000-acre estate was just days away.

HRH The Prince of Wales (in Scotland: His Royal Highness, The Prince Charles, Duke of Rothesay) intervened with an eleventh-hour personal financial contribution to save the estate, the house and its illustrious contents for the nation. He was supported by a consortium that included the Art Fund, the Garfield Weston Foundation, the Monument Trust, SAVE Britain’s Heritage, the National Heritage Memorial Fund and the Scottish government. The Prince’s bold plan envisaged not only opening the rarely-seen house and its collection to the public, but using it as a centrepiece to revitalise the economically-depressed local area. Now under the custodianship of The Prince’s Foundation, Dumfries House is a vibrant community hub for education, tourism and events.

The interiors of Dumfries House are also now considerably more vibrant, as precious objects in the house have been recently restored and renovated. The vivid — some would say ‘lurid’ — coloured drapery and opulent upholstery now seen at Dumfries mimics the original fabrics and trims originally chosen for the house in the 18th century. The elegant and understated exterior of the house now belies a dazzling treasure chest within. Over the years, my eyes had become accustomed to the faded hues of two-hundred-year-old tapestries and damasks in historic houses. The remarkable riot of bold colours that greeted me as I entered Dumfries, made a dramatic impression, similar to how a visitor in the 1700s would have experienced the house and its interiors.

I was fortunate to visit Dumfries during a study program conducted by The Attingham Trust. Our group was co-led by Annabel Westman, FSA, a renowned textile expert and adviser on heritage interiors. Annabel oversaw the restoration of one of the ‘hero’ pieces in the Dumfries collection: a mahogany four-poster bed whose design was featured in the third edition of Chippendale’s Director. The bed was draped with nearly 120 metres of sumptuous silk damask and was the most expensive piece commissioned from Chippendale by the 5th Earl of Dumfries. Its recent two-year restoration included intricate repairs to woodwork and the painstaking stretching of newly-woven silk across the carved wooden headboard and canopy.

In the 18th century, the Family Bedchamber which now houses the impressive bed, was a showpiece reception room as much as a place for sleeping. It also originally contained the magnificent rosewood breakfront bookcase now located in the Blue Drawing Room. The bookcase was famously expected to bring close to £20 million if auctioned by Christie’s in 2007. Chippendale’s 1759 bill for the bookcase was a mere £47.5.0.

The remarkable objects in the house include sculpted and gilt window pelmets; extravagant rococo mirrors; one of the oldest Axminster carpets in existence (woven by Thomas Witty to a design by the young Robert Adam); and a variety of other original furniture. Not all the furniture is by Chippendale, but items by other significant Scottish cabinetmakers such as Alexander Peter, Francis Brodie and William Mathie draw on the specific designs or the design ethos of Chippendale’s Director. This was a way for the savvy 5th Earl to save money: many of the showpieces were supplied by Chippendale, but other supporting objects were commissioned from local craftsmen to Chippendale’s designs. Chippendale’s pattern books continued to be reinterpreted, copied and freely re-used in this way by patrons and craftsman throughout the 18th century (and beyond).

The authentic historical features of Dumfries House have been carefully maintained, but the interiors have also been rejuvenated to accommodate their new, more public ‘lives’. The house is now used for royal receptions and events, and a number of the rooms can also be privately booked for functions. During my visit, we were fortunate to view the private rooms used by the Prince of Wales and Camilla, Duchess of Cornwall when in residence at Dumfries. These spaces, and the welcoming Entrance Hall with its striking blue doors, light colours and armchairs with fresh, checked blue and white covers, epitomise the comfortable, contemporary and ‘lived-in’ feel of the house.

This sense of vibrancy and rejuvenation is apparent across the 2000-acre Dumfries Estate. Resident artists work from the converted Georgian laundry building; and purpose-built education and leadership centres host training on horticulture, hospitality, traditional craft skills and engineering. With oversight from The Prince’s Foundation, a community health and wellness centre has opened, and woodland walks, formal gardens, a Chinese bridge, and an organically-certified walled garden have already been completed. The historic ‘Lady’s Well’ – originally designed by Robert Adam - was recently reconstructed by three trainee stonemasons. This balance between the past, present and future, epitomises Dumfries House today.

Dumfries House is open by guided tour only. Accommodation is available onsite at Dumfries House Lodge. For images of the key rooms, descriptions of the restoration and information about the work of The Prince’s Foundation.

above | Front entrance, Dumfries House, image courtesy of the author