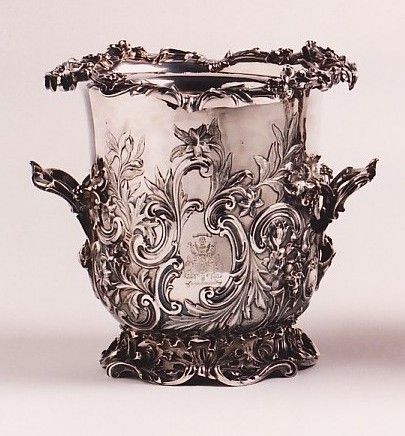 Antique wine coolers come in two forms. There are pieces of furniture that rise from floor level and were designed to take any number of bottles from four to four dozen. They were metal-lined and were designed to hold iced water in which wine bottles would cool. Alternatively, there were table wine coolers, occasionally made of mahogany, but more often of pottery, silver or silver plate. There is one well-known pair in the British Museum, made circa 1700 in 22-carat gold and weighing over 11 kg!

Of table wine coolers, the British Museum’s gold pair are among the earliest known. By the early 19th century, England was highly prosperous resulting in ever more opulent home furnishings including dining room settings. By the 1830s, dining tables would often accommodate three or four dozen diners and all the accessories needed for the food and wine. Wine coolers were made in pairs and in sets of up to 12. Openly displaying wealth was considered normal or even expected at that time.

The most successful firm of silversmiths in London for much of the 19th century were the Barnards. The firm could trace its roots to circa 1680 through a succession of partnerships. The first Edward Barnard became a partner in 1808 with Rebecca Emes. Rebecca withdrew from the partnership in 1829 and Edward Barnard brought in his sons, Edward Jr, John and William, trading as Edward Barnard & Sons. The firm was still in business at the beginning of the 20th century.

The Johnston Collection’s pair of wine coolers are typically bold expressions of the popular Rococo revival of the early 19th century, and which followed the French idiom, rather than the more restrained English version. The florid scrolls with fruiting vine and foliage abound in profusion. They form the handles and are cast and applied to the raised cylindrical bodies, as are the cast silver rims and feet. Each wine cooler has a silver liner - the plain inner element which accommodates the bottle. This latter feature is unusual as most wine-cooler liners are silver plated to reduce cost.

The wine coolers are engraved with a crest and the motto “Heaven’s Light our Guide” - the motto of “The Order of the Star of India” - the most senior order of knighthood which Queen Victoria created to honour “Indian Princes and Chiefs” and very senior British officials “for conspicuous merit and loyalty”. Most recipients were Maharajahs, Nabobs and Nizams, as well as Viceroys and Commanders-in-chief of the Indian Army.

The crests and mottoes are somewhat later than the wine coolers that were made in 1834; the Order of the Star of India was created in 1861 after the consolidation of power by the British following ‘The Indian Mutiny’ of 1857. As Barnards were exporting silver around the world, it is probable that these coolers were newly bought by a Maharajah who was subsequently appointed to The Order, and who then had them appropriately engraved.