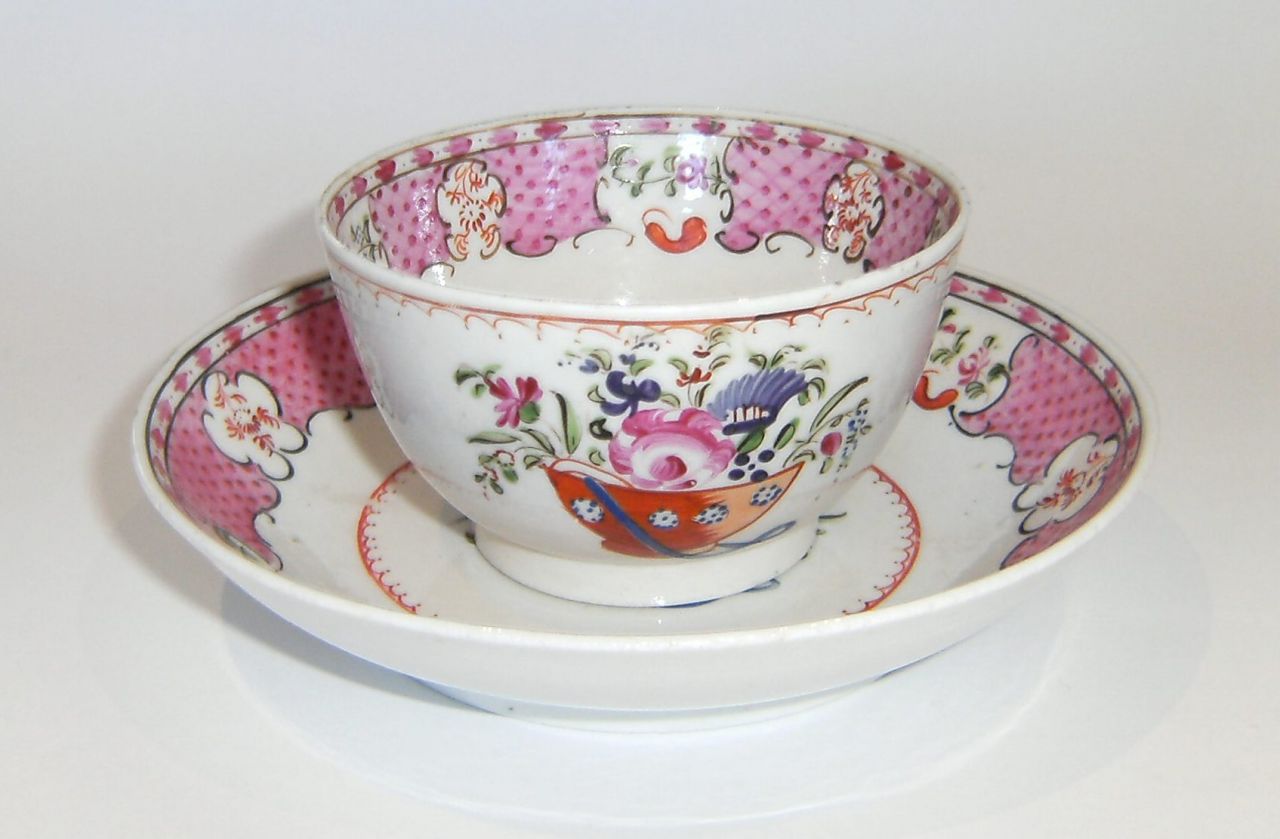 The importation of fine porcelain from the orient in the 18th century made a lasting impression on the upper echelons of European society. it also sparked a frenzy of activity among British potters and ceramic artists who saw opportunities to copy the Chinese style and establish profitable enterprises.

Many obstacles to advance production of wares included finding suitable sources of clay and other minerals required to produce the white, vitreous, resonant and translucent quality of thinly-potted porcelain; mixing these materials in the correct quantities and firing them at an appropriate temperature in the kiln. The New Hall China Manufactory (1781 - 1835) at Henley in Staffordshire was one of the pioneers in this endeavour.

The list of potters and entrepreneurs associated with New Hall reads like a Who’s Who in British ceramics. In 1768 William Cookworthy (1705-1780) discovered a source of china clay in Cornwall which was thought suitable for porcelain manufacture and commenced experiments at Plymouth. The recipes he used included kaolin, micaceous feldspar, quartz and other materials.  From 1774 the work was continued at Bristol by Richard Champion (1743–1791), but met with only moderate success. Champion’s patent rights were acquired by a group of eminent potters who had banded together to form New Hall in 1781. The group included John Turner (1737-1787), Anthony Keeling (? - 1747), Samuel Hollins, Jacob and Peter Warburton and the firm’s manager John Daniel – all enterprising and all successful in the world of ceramics.

Hard-paste porcelain, although requiring no glaze, was often glazed in order to soften the appearance of the piece and to facilitate its decoration either with under-glaze transfers or over-glaze enamels. New Hall’s forerunners at Plymouth and Bristol had used the Chinese method of firing - first firing at a moderate temperature, followed by a firing at 1300-1400 °C - which fused the glaze with the under-body to yield translucency. New Hall found that by reversing this process a more consistent quality, hence a more profitable product, could be produced.

Most British potters had taken a different tack by developing the so-called soft-paste approach which led to the increasing use of bone ash in their recipes. Soft-paste porcelain and its modern descendent bone china, is indeed softer, more tactile and retains its shape in the kiln more reliably than its hard-paste relative. So, it was not surprising that New Hall moved with the trend and commenced soft-paste manufacturing around 1812. Having ready access to coal for their kilns, increasingly reliable transport for raw materials and a flexible business plan, New Hall was able to take advantage of their growing middle-class clientele by supplying wares which were comparatively cheaper (and a little more pedestrian) than the more sophisticated items from Worcester, Chelsea and Minton.

At a time when tea-drinking was all the rage it is not surprising that much of New Hall’s production was tea wares, especially after the tax on tea was removed in 1784. Fortunately, the factory’s output was mostly for the home market so the Napoleonic Wars did not impact sales to a great extent. However, a lack of managerial continuity, coupled with industrial unrest in the potteries during the 1830s finally led to the closure of the enterprise in 1835.

The good news for collectors is that there are still many New Hall items to be found - and at reasonable prices. Most are not marked except for a pattern number, so collectors need to do their homework. The best source of information is David Holgate’s definitive work, New Hall & Its Imitators (Faber and Faber, London, 1971). Even though New Hall’s products are not among the most prized British porcelain and bone china, they have an enduring charm and deserve a special place in the history of ceramic art.