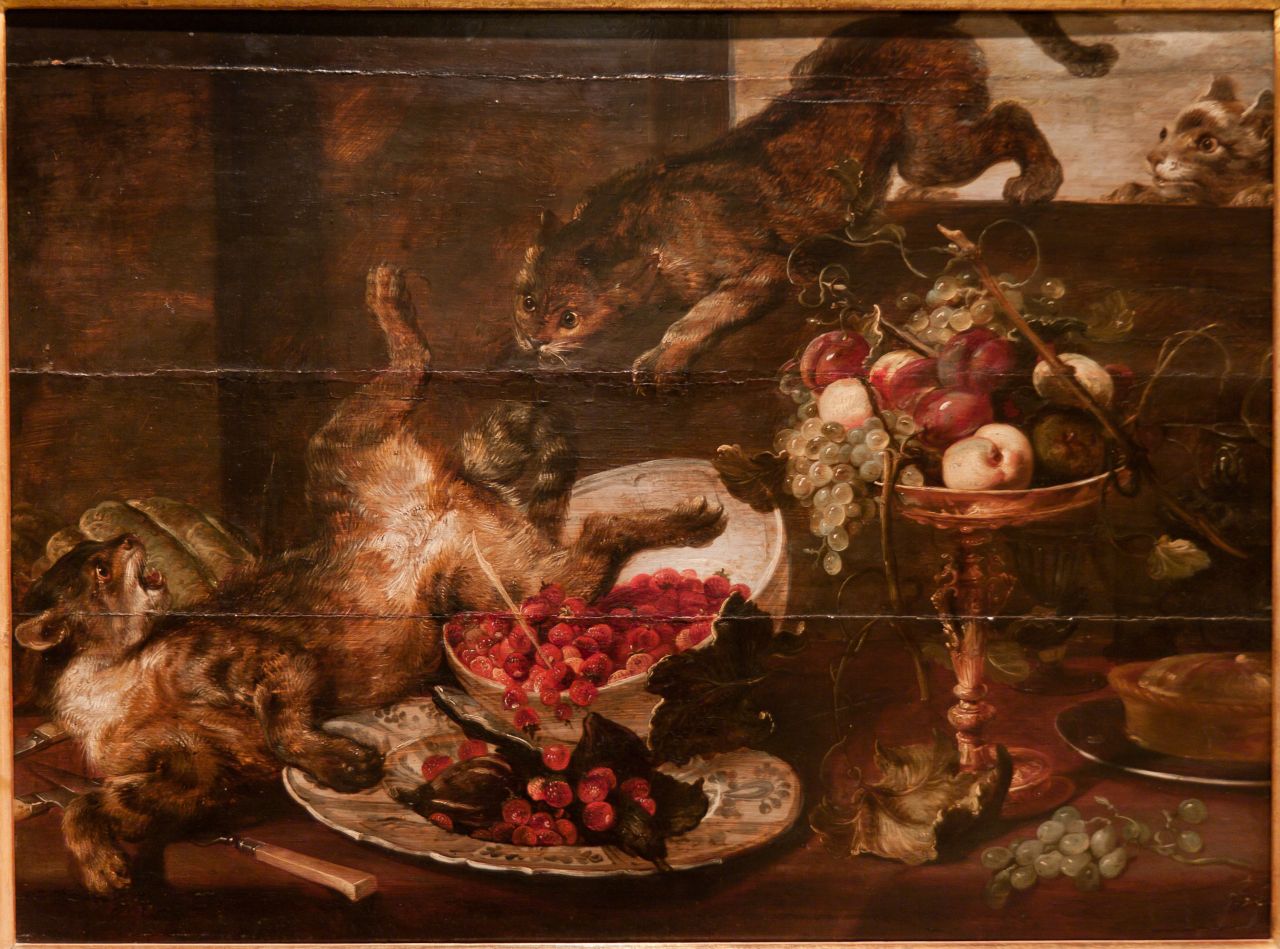 The untitled (Still Life with Cats), Flanders, circa 1650, (A0972-1989) prompts questions as to what this ‘unstill’ still life painting represents.

Two cats have entered through an open pantry window, whilst a third looks on from the windowsill outside. On the table below the window, a gilt tazza holds a variety of luscious fruits and a pie is on a dish; but a Chinese blue and white porcelain plate and a bowl filled with ripe red berries have been toppled over and broken by a cat as it falls backwards, twisting and turning to face its feline foe attacking from above.

The painting is unsigned, leading to uncertainty as to attribution. Variously thought to be by Frans Snyders (1579–1657), Jan Fyt (1611-1660), or Melchior d’Hondecoeter (1636-1695), recent research suggests that it could perhaps be attributed to follower of Paul de Vos (1591-1678). Snyders was a noted still life painter and animalier, and de Vos and Fyt were both employed in his workshop at different times.

The cats in The Johnston Collection picture replicate those depicted in a much larger painting by de Vos Cats Fighting in a Larder, mid-17th century, in the Prado Museum, Spain (P01866) and another Fighting Cats and Dog in a Pantry sold at auction in 2011. It is possible that the same template was used to create the cats in each of the three pictures. The distinctive gilt tazza appears to be the same as that seen in several of Snyder’s still life paintings.

Art flourished in Antwerp during the first half of the 17th century and it was common for artists to repeat compositional schemes and motifs, as they sought to meet the demand for paintings from wealthy landowners and the affluent merchant class. It was not unusual for different artists and artist’s studios to work collaboratively on a single painting. Both Snyders and de Vos are known to have contributed animal figures to paintings by Rubens.

The tradition of lavish market scenes depicting tables laden with fruit, vegetables and game, and kitchen or pantry scenes, began in the late 16th century in the Netherlands and continued into the 17th century. It was a reflection of the increasing urbanisation of Dutch and Flemish society with an emphasis on the home and personal possessions. Despite trade wars with England and ongoing unrest between the United Provinces of the North and the Spanish Habsburg ruled South, the Netherlands was enjoying a period of prosperity with increased trade and commerce, improved agriculture and luxury goods imported by the Dutch East India Company.

The fruit seen on the table in Still Life with Cats would have been considered a delicacy to be served as part of the dessert course in an affluent household, however, the inclusion of the unruly cats represents ‘disorder’. In still life paintings and in the literature of proverbs, “animals fighting were interpreted as moral allusions to the abandonment of responsibilities and their consequences”. The pantry setting alludes to the perils of domestic disorder, and of the need to protect the household from external threat. Given the social and political climate of the times, the contemporary viewer may have also understood it to be a metaphor for the wider world.