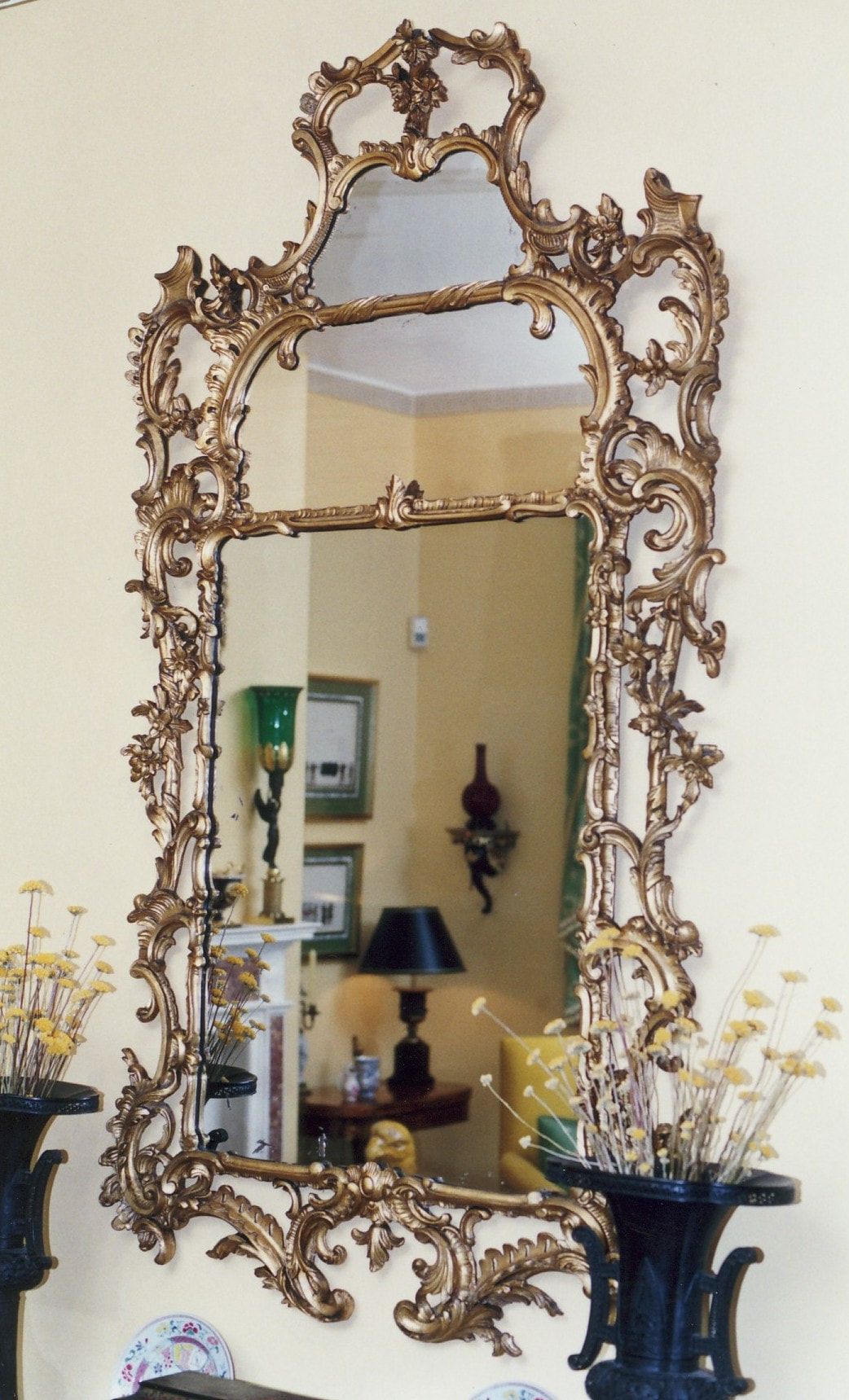 The Chippendale style gilt mirror in The Johnston Collection reflects the graceful, flowing delicacy of the Rococo period. As a reaction against the grandeur of the Baroque, the Rococo style had reached dazzling heights in France during the reign of Louis XV.

As a style, the Rococo was light and delicate in design with an emphasis on flowing curved lines. It reflected the intimacy of the boudoir and its pastoral scenes were often rendered with playful and witty themes. In France, Rococo rooms were designed as total works of art and gilt mirrors were a prominent feature adorning the walls and filling the room with glittering light.

Louis XV’s reign was characterised by overt excess. The lifestyle of the wealthy aristocracy consisted of an everlasting carnival of masquerading, illusion and intrigue. The mirror was a fitting symbol of their vanity. In England the Rococo was called the French style or modern style, but was nevertheless very desirable in wealthy homes. Thomas Chippendale first published The Gentlemen and Cabinet Maker’s Director in 1754 as a trade catalogue in which he presented a more restrained version of the Rococo style to his English clients.

Although asymmetry was a desired feature of Rococo design, the mirror in The Johnston Collection is perfectly symmetrical in form. It contains three mirrors, graduating in size, surrounded by the integrated flow of acanthus leaves forming C and S scrolls. Garlands of flowers hang at the sides. The frame is very intricately carved and the piercing between the foliage gives the mirror a feeling of lightness and delicacy. The leaves overlap the mirror at points, creating spatial depth and visual deception. The introduction of pine from America and its use in the framework made such delicate carving possible. Gilding of frames was particularly popular as the gold leaf was both precious and reflective, casting a rich golden glow in candlelight.

Nowadays, it is the gilt frames that are so prized by collectors, but in the 18th century it was the glass that was the most expensive and valued element of the mirror. Making glass in the 18th century was very costly and dangerous. The French method of glassmaking consisted of pouring molten glass and backing it with tin and highly toxic mercury to achieve a reflective surface.

Not until the 19th century when new methods of mirror manufacturing were invented was the use of mercury abandoned. Although the French method of glassmaking was adopted in England in the 1770s, Chippendale normally imported French glass to satisfy the tastes of his wealthy clients. Glass could not be made in large plates, so it was quite usual to have more than one panel in a mirror. In The Johnston Collection’s mirror, the lower mirror is lighter in colour than those above and does not fit the frame properly, suggesting that it may have been replaced in the Victorian era.