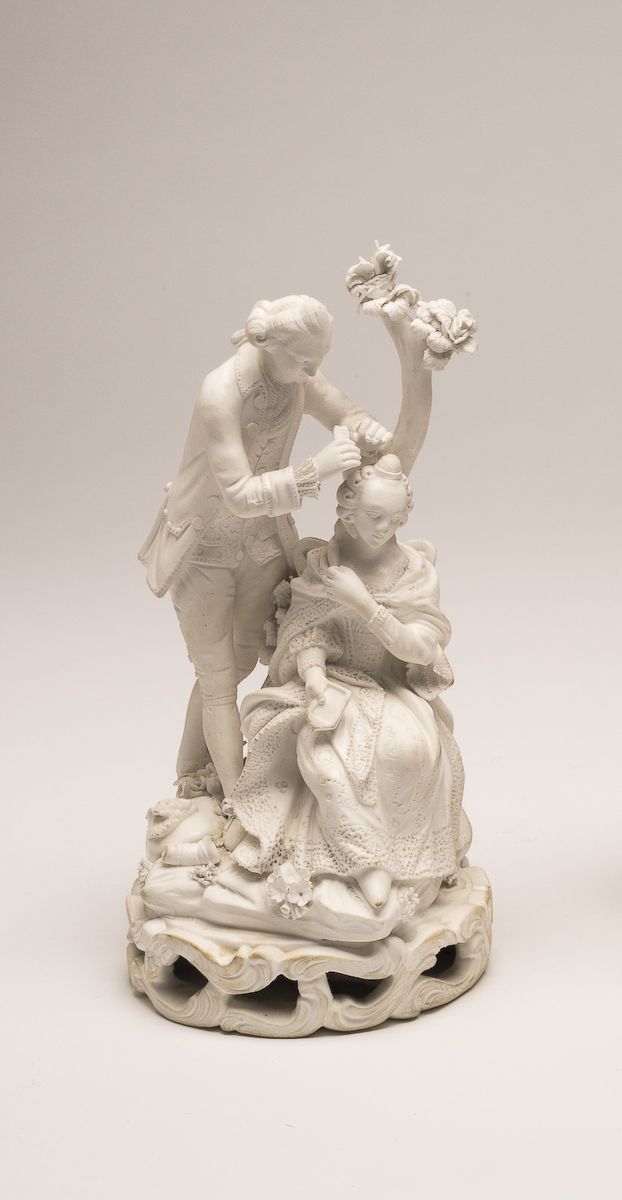 By the early 19th century money determined social position; degrees of gentility were to be conferred in strict ratio to one’s annual income though men’s fashions continued to reflect the practical and ease evident since the late 19th century.

Throughout the period 1760 to 1770, when a new middle class used fashion to showcase their wealth, men continued to wear the coat, waistcoat and breeches of the previous period. However, with fashion influences from the Grand Tour and a new desire for country pursuits, the elaborately embroidered, fitted suits of silk and velvet retained for formal and court wear, gave way to a relative simplicity of appearance with carefully tailored fine wool or wool-silk garments. Coats became shorter rising to above the knee or mid-thigh during the 1770’s, they were also of a tighter, narrower cut worn open with thigh length waistcoats and linen shirts with full sleeves and frills at the cuffs and on the front opening. The new knee length breeches, fastened with ties, buckles or buttons fitted snugly into the Hessian boots worn for walking and hunting.

The newly fashionable Macaroni style of a high wig with a queue of hair held in a black satin wig-bag to protect the back of the jacket, took the wig-bag from the court to everyday life. In contrast to the more conservative broadcloth suits of their contemporaries the Macaroni Men delighted in tightly cut coats and breeches based on fashions from the French court. They wore pastel coloured brocaded and embroidered silks and velvets with fashionable stripes and spots. Their outfits came complete with expensive accessories and decorated black leather shoes with over-size buckles. Before long however their courtly and often effeminate clothing was to be replaced with more natural fashions.

By the 1780’s coats were cutaway and worn unfastened, whilst waistcoats had shortened and came with or without sleeves. Shirt sleeves were still full, gathered into a plain band at the wrist for daytime wear - full dress shirts still had ruffles of fine fabric or lace and were worn with waistcoats of embroidered satin. The unstiffened frock coat with its small collar and wide lapels, derived from a traditional working-class coat – “so much so that young men dress more like their grooms!!’ - was popular for informal occasions and riding. It was worn with doeskin breeches, knee-high boots and a wide-brimmed tricorne hat. When shoes were worn, still with no left or right features, they were low heeled, made of leather and fastened with buckles of silver or stainless steel and worn with silk or white woollen stockings.

A banyan, often padded for warmth was worn at home over the shirt, waistcoat and breeches. Gentlemen were often painted in their libraries wearing a banyan with their own hair or a soft cap rather than a wig. By the 1790’s broadcloth had triumphed over silk with finely cut monotone suits becoming popular and the redingote or riding coat had become the most important item of men’s fashion. They were single or double breasted, less full than previous styles with smaller lapels and the front was cut in a curved line towards the back with long tails behind. Linen or muslin shirts were longer at the back and with attached collars and full sleeves were worn with the increasingly important stocks or wrapped in a cravat tied in various fashions. Shirts were regarded as a relatively unimportant fashion item and were often made by female relatives. In 1800 Jane Austen was rushing to finish a batch of shirts for her brother Charles before his ship sailed. Knee breeches whilst remaining popular in the country were increasingly worn for only formal or ‘full dress’ occasions in town and at court, being replaced by calf length pantaloons which were tied with ribbons at the side. Pantaloons complemented the close fitted lines of the morning coat which was worn for more formal occasions and brought the glamour of the military into men’s fashionable dress, especially when ornamented with military braid and worn with tasselled Hessian boots. Plain waistcoats came in a variety of styles though most were double breasted, high waisted and squared off at the bottom with large lapels overlapping those of the coat. Greatcoats, often with contrasting collars of fur or velvet would be worn in inclement weather, a style known as the Garrick had three or five short capelets attached to the collar. The tricorne hat went out of fashion and was replaced by a round, flat- crowned, wide brimmed hat (which later evolved into the top hat) usually made of felted beaver.

In the period 1800 to 1815 men’s fashions became increasingly conservative with the emphasis on superb fit and impeccable cut rather than extravagant design, the new styles discreetly asserting wealth. The rules of fashion had become more fluid and extravagant fashions were confined to court where they were still mandatory. Beau Brummell took the fashions of the 1790’s and tailored them bringing to men’s clothes a sobering influence, advocating a smooth, tight and flawlessly tailored fit whilst dictating not merely specific articles of dress but a totally new concept of masculine elegance. Cut, fit and proportion, in keeping with both the revolutionary and classical age, expressed the status, strength and sensitivity of gentlemen and a new stylish masculinity.

Brummell advocated good grooming and personal hygiene, linen and muslin shirts and neckties which could be changed and laundered daily, their unsullied whiteness being a must for a fashionable gentleman. Hair was worn cropped, clean and unpowdered. For daytime activities a fashionable gentleman would wear a dark blue or black tailcoat with a high turndown collar, broad lapels and gilt or brass buttons with a short light coloured or white waistcoat. A lightly frilled muslin or linen shirt with a black stock or a highly starched cravat wrapped around a high stiff collar and skin tight pantaloons would complete the outfit. The pantaloons, cut tight to the body and with corset-style lacing at the back, would be of buff coloured chamois leather or doeskin for day wear and riding worn with plain knee-high black boots. Knitted black or cream wool or silk was worn for afternoon excursions and for evenings, breeches or pantaloons of sheer and delicate black silk jersey were worn with embroidered silk stockings and black, lightweight pumps.

A longer version of the pantaloon, the trouser, was adapted from military uniform and had a leather strap that fastened under the instep and kept the line of the trouser in place - which was not to be marred by rucked shirt tails or underwear. Immaculate understatement and purity of line could only be achieved with wealth and with the art of tailoring brought to new heights of excellence by the increasing number of bespoke tailors in London. Men’s coats were sculpted garments with a central seam down the back and often padded across the shoulders and chest. A new version of the frock coat, cut long and straight with distinctive front edges and worn with a glossy beaver skin top hat became a popular alternative for riding or for promenading when a pair of gloves in the palest leather, a fob watch, snuff box and a walking stick box would be added to the outfit. The walking stick was an indispensable fashion accessory, promoting a sense of gentility and social propriety, the choice of wood conveying the status of owner – Malacca canes were the most expensive. The wooden shafts had handles and ferules of stainless steel, silver or gold with sticks carried of an evening being thinner, often made of ivory and richly inlaid, the perfect accessory to the restrained perfection of the gentleman’s dress.

Brummell’s influence had changed the way gentlemen dressed but men’s fashion was to be challenged again after 1815 with the rise of Romanticism embodied by Lord Byron and also by the conservative influence of the Industrial revolution.