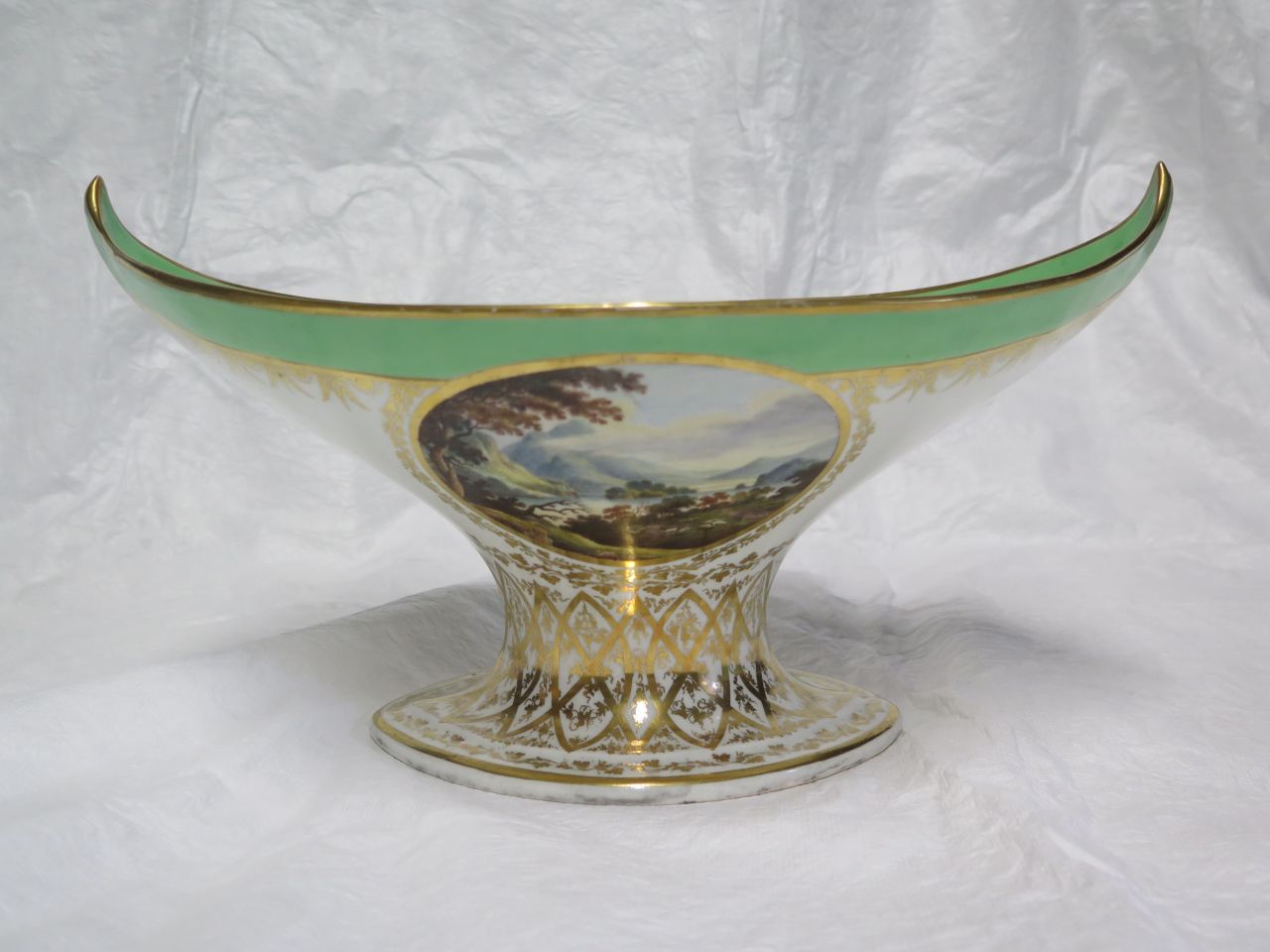 This stylish porcelain pineapple composite / stand (A1343-2014) was created by the skilled employees of the Derby porcelain factory, between 1797-1800.

A relatively new acquisition, you may have glimpsed it displaying a delightful ‘yarn-bombed’ knitted pineapple by West Gippsland artist Wendy Hitchins, in our Joyful & Triumphant Christmas rearrangement of Fairhall.

The top of the stand is boat-shaped in composition incorporating a raised concentric circular section meant to hold this most uniquely shaped fruit firmly into place. Note the elaborate gilding on the sides and pedestal base, while the focal point is the two charmingly rendered oval painted landscapes framed by a neo-classical pearl studded board. The distinct Derby factory blue cross swords puce mark and pattern number 345 are emblazoned on the stand’s base.

George Robertson (Scottish, 1724-1788), a well-respected landscape painter at the Derby factory during this period, is likely to have painted these scenes, which are conveniently named as Loch Lomond, Scotland and Civita Castelano, Italy. Both views are perfectly still and designed for contemplation of the ‘perfect order’ which Robertson’s 18th century contemporaries believed underlay the whole of nature.

Derby factory artists were heavily influenced by the finest landscape painters of the day, including Paul Sandby RA (Nottingham, 1731-1809), Joseph Wright of Derby (Irongate, Derby 1734-1797), and William Duesbury (Cannock, Staffordshire (1725-1786). Derby’s chief artists were also known to have completed en plein air sketches, so these may possibly have been painted at the actual sites. The compartments illustrate the topographical and picturesque style of landscape painting in reserves that Derby was first to incorporate onto English porcelain.

By the mid-18th century, a number of British landscape artists felt the fashion for Italian views (vedute) and continental artists (Canaletto, Vernet, Bellotto, and Guardi) were working to their detriment. So, they felt compelled to re-paint Italian views from sketches or to interpret the Welsh or Scottish countryside such as Loch Lomond in terms of the Roman campagna. It is likely such pieces of decorative porcelain were also marketed to Englishmen who had travelled to places like Civita Castelano, in Italy, reminding them of places they had visited on their Grand Tours during their youth.

Exploration of the globe and colonisation brought new foods, including pineapples, from the British West Indies to the tables of England requiring new equipment to facilitate their consumption as well as their presentation. By the 18th century, pineapples became a symbol of hospitality and friendship, and were often found gracing dinner tables in honour of special visitors or guests, or in decorative motifs on clocks, wooden bed testers or even on cast iron gates, like the one outside Fairhall.

One can imagine this choice piece of porcelain taking centre stage in an elegant Georgian dining room during a late 18th or early 19th century candlelit supper or sumptuous banquet, perhaps in a stylish London townhouse in upmarket Mayfair or Belgravia. As stated, this wonderful albeit rare and unusual specialised centrepiece is a recent addition to The Johnston Collection, made possible through the generous bequest of former Director, the late Nina Stanton.

This article was originally published in Fairhall, issue 19, November 2016, pp 9.