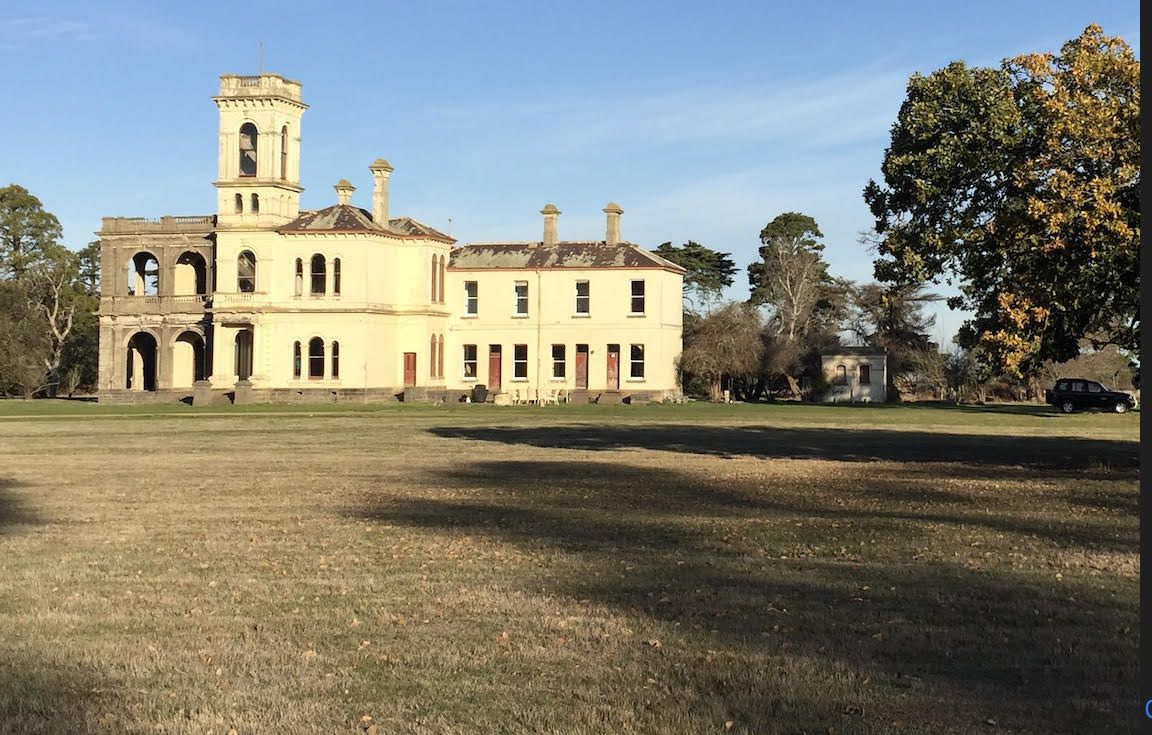 My daughter Katrina and her husband Adam bought their beautiful 1870’s Italianate villa, Mintaro purely by default. They went to look at it on a Saturday, fell in love with it, and by the following Wednesday they had purchased the house, knowing little of the huge amount of conservation works that would lie ahead of them.

Mintaro was built for a Scottish sea captain Robert Gardiner, who made a fortune in shipping, whaling, gold transportation, and pastoral activities. The property itself, located at Monegeetta, Lancefield, was originally 120,800 acres, but when Katrina and Adam bought it, there was only 70 acres left.

Interestingly Captain Robert Gardiner himself was the great-grandfather of Sir Robert Helpmann. Also, it is noted that at his previous homestead Bolinda Vale, he fed and watered the animals of the final Burke and Will’s expedition at the start of their journey west.

Architect James Gall designed and finished building Mintaro by 1882. It was completed at the cost of £22,000, the most expensive house built in Victoria at that time, and was said to be modelled on Queen Victoria's summer hideaway, Osborne House on the Isle of Wright, in England.

The house itself was built in the typical two-storey brick rendered Italianate style with a two-storey carved loggia running across the front and part way along two sides. The entrance porch on the north side has free standing Doric columns. On the top of the second-storey is an impressive three-storey tower, from which it is said, Gardiner could look toward his ships on Port Philip Bay. The servant’s quarters to the west are more simple and lower in form, thus taking the eye to the imposing main homestead itself.

Inside the spectacular entrance are free-standing fluted scagliola Corinthian columns holding up the 4.6-metre-high ceilings, with original Minton tiles on the floor. Off this main entrance is the drawing room, dining room, morning room and library, still all with original carved marble fireplaces, elaborate plaster mouldings, and ceiling roses in all the rooms.

All the surfaces have been decorated by techniques such as wood graining, marbling, stencilling and wall papers, each room in a different decorating scheme. Stained and etched glass windows are abundant, as are elaborate ornate servants’ bells in the main areas including the bedrooms. These are connected to butlers’ pantries and kitchens and with speaking tubes from kitchen to dining room and upstairs landing.

Other intact areas are the butler’s pantry downstairs which is one of the last original ones left in Australia. It was totally carved out of wood and joins the kitchen areas to the dining room. Whilst upstairs, the original bathroom and toilet was simply a wooden box with a potty inside to be emptied by the servants. Also, upstairs, the four main bedrooms retain their original handmade wallpapers in botanical themes.

As well as the main rooms downstairs there is a cellar, conservatory and a billiard room off the dining room. The conservatory is now non-existent, and there is no detailed plan of how it looked at the time, except for the gas conduits which supplied gas to every room in the house. The original gas light fittings can still be seen in most of the main rooms and servants wing, and at that time Mintaro had its own gas supply. No records show how Mintaro’s gas supply worked, even though there is an enormous amount of documentation collected by Katrina and Adam. The out houses comprise of a separate toilet block, a beautiful brick stable, a coach house and several woolsheds. As well as gas, James Gall installed a water system (much like what we use today). Collecting water from behind the parapet and siphoning it into huge tanks in the ground. The only problem was that the pipes were made of lead and eventually led to the death of Captain Robert Gardiner through lead poisoning.

Walter Brettschneider who is still a legend in the decorating area led a team of craftsmen who were the best of their time. Brought in from overseas for the opening of the Royal Melbourne Exhibition Buildings for The Melbourne International Exhibition in 1880, and later to decorate the grand homes that were being built in Melbourne, they were directly responsible for the different techniques mentioned above. They also hand-painted murals into the ornate cornices. Brettschneider’s signature along with Captain Robert Gardiner’s can still be seen in the ceilings of the drawing room. The decoration also features references to Greek mythology. Large scenes in the walls of the drawing room reflect the ways in which Gardiner made his fortune. Smaller scenes depict places that were important to Gardiner including his homeland, Scotland. The four walls of the Morning room feature figures representing the four arts - literature, music, painting and architecture. The figures holding the tablets is where the signature of Brettschneider and some of the other artisans who worked with him can be seen.

After Gardiner died, early in the 1900’s Mintaro was purchased by the Methodist Home Mission and became Mintaro Reformatory Home for Girls (1903-1912), a home for wayward girls where they were taught skills like housekeeping and cooking. It was purchased by one other owner in 1914, and its last owners the Rae family, bought it in 1934. They owned it for 78 years. The army appropriated the house and land during the Second World War. After the war the house was returned severely damaged on one corner and only a part of the land, decimating the grazing area, and drastically reducing the Rae family income. The Rae bachelor, Derek, who was a war child and was incapacitated by a fall, lived his life frugally in rooms downstairs. When he wanted to move he would simply shut the door and move to another room. Nothing was done for improvement or preservation. Unlike other grand homes of the same era, he did no remodelling anywhere including the kitchens and bathrooms which generally transition a homestead to the modern era. So, Mintaro was completely preserved in its original condition through benign neglect.

There was no garden to speak of when Katrina and Adam bought Mintaro, apart from a small orchard in the rear. It had been completely lost. Although they searched historical archives no mention or description of any plan of planting or design was found, although, there are some beautiful rare species of trees on the property that are found in very few locations in Australia. Huge non-deciduous Oaks, Cedars, Monkey Puzzles, Pines, Sequoias, and Cyprus dot the landscape, but other than that the property is bare of vegetation.

When Katrina and Adam took over Mintaro all the wonderful original hand-painted wallpapers were intact, the skirting boards and doors had never been overpainted and were in a beautiful, hand-painted golden wood grain and the floor original. They moved into the servants’ wing and began to work with Heritage Victoria and a conservation team. One of the most redeeming factors in the subsequent conservation, was that Katrina herself had a building degree from University of Melbourne, and Adam originally an electrician by trade was a master in many other areas.

They soon learnt the importance and the historical significance of Mintaro. In Katrina’s words she said “We didn’t realise how important the homestead was until we saw the evening news that the sale of Mintaro was the lead story! That’s when we Googled it and realised what we had purchased.” They began to work with Heritage Victoria, architects in conservation, and specialists in every field. They spent hundreds of hours learning about old building techniques, plastering, conserving old original wallpapers, repairing cornices, embellishments, flooring, window framing and anything that Brettschneider and his team had created. Luckily anything broken or had fallen off from anywhere around the house and grounds had been put into the wine cellar by Derek Rae. This was a gold mine. Everything from the tiny plaster moulds to old newspapers were secreted in the basement. So, when the current restorers where looking for some missing piece of cornice, moulding or architrave, they only had to look in the cellars.

Katrina and Adam realise that the restoration will be a slow process because replicating the intricate and technical methods used in the 1900’s is very different from what is currently used today. They are not in a hurry, and enjoy the results achieved. Newspaper articles have just surfaced about the garden and a revolutionary water irrigation system that was to be applied by the owners who purchased Mintaro from Robert Gardiner - but that is another story.