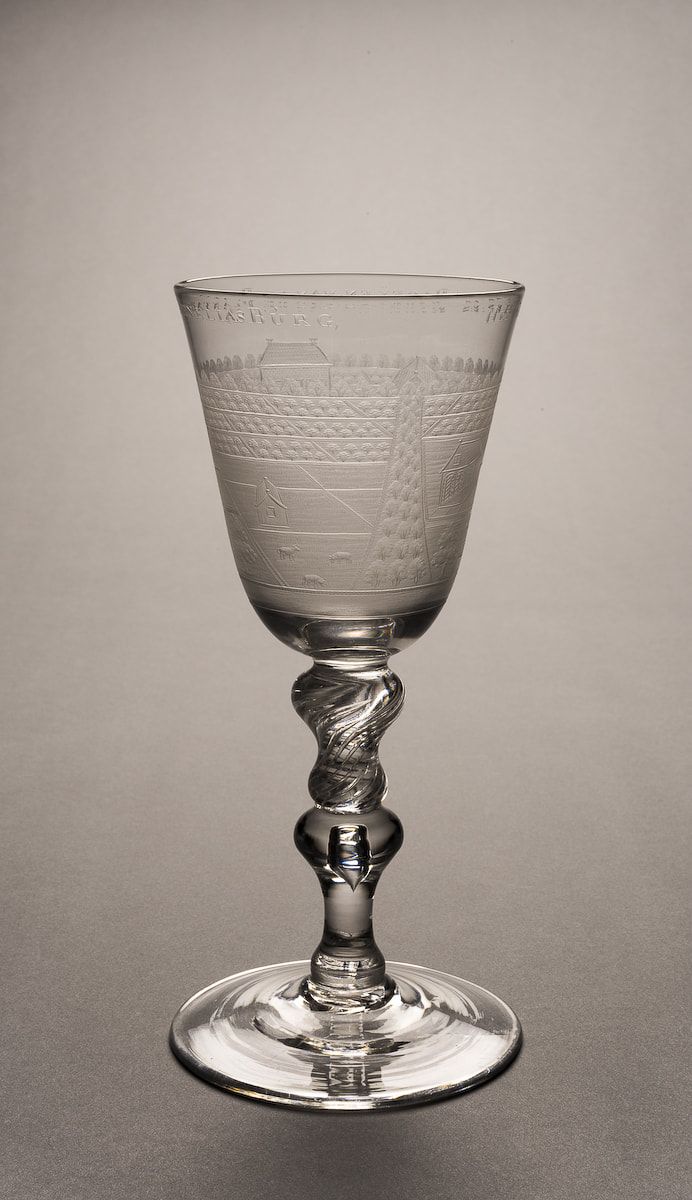 There are some examples of line engraving on 17th century English glass, but unlike Continental practice, little English glass was decorated during the early part of the 18th century.

The Dutch also excelled in the wheel engraving of glass where the engraver uses small copper discs covered with abrasive and mounted on a rotating shaft to cut the glass surface to develop the design. This was the common form of engraving of glass both on the Continent and in England in the 18th century. However, the quality of such engraving in England was generally inferior to that of the Continental artists.

In the latter part of the 18th century, soft English lead glass manufactured in Newcastle was favoured by Dutch wheel engravers and The Johnston Collection has a light baluster goblet engraved by the Dutch master, Jacob Sang (A0410- 1989)

Engraved glass should not be confused with etched glass. Etched decoration on glass was introduced around 1840 when hydrofluoric acid was used to develop designs. The glass would first be covered with an acid-proof coating. The design would then be drawn by scratching through the coating and applying the acid to dissolve the glass so exposed.

The decoration of glass using glass-based enamels was practised on the Continent from the 14th century. However, the traditional process was difficult to use on lead glass which has a lower softening point than soda glass. In the middle of the 18th century, William Beilby (1740–1819) of Newcastle was successful in developing new enamelling techniques for lead glass. Glasses enamelled by William and his sister Mary are sought after by collectors. A Beilby enamelled Newcastle light baluster wine glass is illustrated.

Decoration of glass by gilding was also carried out in the 18th century. The most famous of the gilders was James Giles (English, 1718-1780) whose workshop is probably more associated with the gilding of porcelain.

In the 19th century, 18th century decorating techniques continued to be used together with acid etching and deep engraving or carving. Glass decorated in the latter manner was known commercially as ‘rock crystal’ and much was produced by Thomas Webb & Sons (est. 1837-) in the latter part of the century at Stourbridge. This form of decoration should not be confused with naturally occurring single crystals of quartz, the true rock crystal, which has been worked by gem cutters throughout history in making highly valued items.

It should be noted that the aim of early glassmakers was to produce a glass comparable in quality to naturally occurring rock crystal.