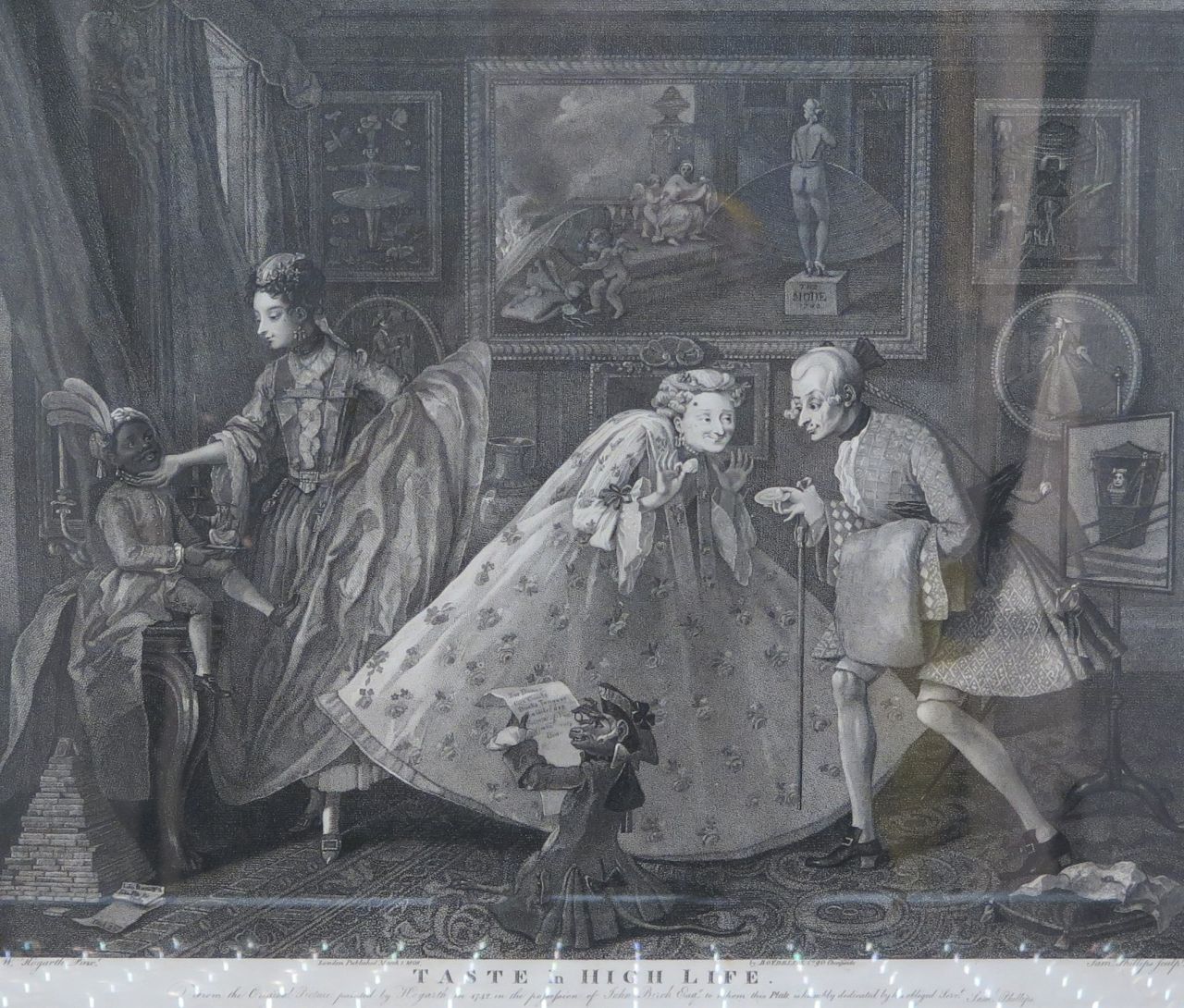 Portraits have always been an important means of conveying information about the sitter - through the clothes they wear, the settings in which they are depicted and the items and people surrounding them.

In the early to mid-18th century an increasing number of portraits feature black domestic servants, usually a boy or young man wearing livery and exotic headwear - often fusing African, Indian and Arab cultures - pictured in the margins of an affluent domestic environment. He is often depicted against a background highlighting new commodities such as coffee, chocolate or tea drunk with sugar from West Indies plantations, all available through transatlantic trade. Inclusion of black servants was aspirational, showing the desired status of the sitter in owning an exotic servant, reflecting the sitter’s connection to imperial wealth and colonial enterprises.

William Hogarth’s Marriage a la Mode, 1745, depicts a group of aristocrats being entertained by an opera singer whilst a black man serves sugared chocolate, symbolising the colonial wealth which financed the lavish lifestyle of the aristocracy and the fact that slavery was an elite practice often tied to high fashion. The black boy kneeling between the basket of baubles and an auction catalogue represents the connection between art and slavery as many 18th century art dealers were also dealers in black slaves, both being auctioned off in coffee houses. Buying blacks was as much an investment as buying art, whilst the term ’patron’ had the dual meaning of ’owner of slaves’ and ‘supporter of the arts’. Hogarth also painted the portraits of a number of rich and cultured men with colonial connections such as Richard Child, an East India business man, and Woodes Rogers, Governor of the Bahama Islands.

Portraits were important in reflecting how the British viewed their concept of slavery - that English slaves, unlike those of the French and Spanish, reflected their masters’ benevolence, cultural superiority and religious virtue. Many of the white portrait subjects chose to be portrayed alongside black servants emphasising 18th century British values of freedom, whiteness and refinement in contrast to the bondage and blackness of those who arrived in Britain as slaves - both black and white subjects being ‘figures of empire’.

Artists were fascinated with the relationship between blackness and ideas of beauty. Sir Joshua Reynolds FRSA (English, 1723-1792) wrote “custom alone determines our preference of the colour of Europeans to the Aethiopians, and they, for the same reason, prefer their own colour”. Reynold’s painting Study of a Black Man, 1770, depicts a noble figure against a dramatic sky and is most likely to be of Francis Barber, Samuel Johnston’s servant and friend. This portrait contrasts sharply with Reynold’s earlier portraits of Lady Elizabeth Keppel, in which a black, female servant is looking up at her mistress, and that of Charles Stanhope, 3rd Earl of Harrington in which the ignored, black male servant gazes up at his master - reflecting typical poses for 18th century portraits. Black servants were shown as secondary figures not to be focused on and often with the same status as the family dog. Occasionally their presence is documented - the servant in George Knapton’s (English, 1698–1778), Painting of the black servant, Caesar Shaw, with Spencer Family at Althorp, 1745, was a negro boy of about 10-years who belonged to the Earl of Sunderland when he was baptised on 6 August 1732. (Great Brington Parish Register).

Black figures are rarely recognised as sitters in their own right but Thomas Gainsborough’s FRSA (English, 1727-1788) Portrait of Ignatius Sancho, 1768, reflects Sancho’s elevated status in British society. Painted as a self-assured figure, and though at the time in service to the Montagu family, he is not painted in livery -rather the hand in waistcoat pose shows him as a man of social standing. Johan Joseph Zoffany’s RA (German, 1733-1810) Portrait of Dido Belle and her cousin Lady Elizabeth Murray, 1799, is one of the earliest to show a black and a white sitter on almost equal terms, both with a direct gaze looking out at the viewer. However, the romanticising of Dido with turban and basket of exotic fruit along with her less ornate gown reflect her not-quite-equal status.

English art of this time shows the fascination with black people at both ends of society. portraits depicting their situation among the upper classes - loneliness as well as humiliation in the alien environment of an aristocratic household. Print revealed their active participation in the sub-culture of the lower classes where they found pleasure in companionship and a degree of protection. They were painted in street scenes as in Sir David Wilkie RA (Scottish, 1785-1841) painting Chelsea Pensioners Reading News of Battle of Waterloo, 1819, with the presence of a black servant in livery. Drawings and newsprint show street sellers and sweepers, musicians, sailors, beggars and prostitutes. Though treated with disdain, black people were objects of curiosity and fascination with African adults and children being one of the commonest motifs on signboards, advertising everything from clothes, cheese and oil to public houses - The Blackamoor’s Head, Black Boy and Horse. Their images were also to be found on trade cards such Marshall’s Tobacco, on maps and in coats of arms.

Willian Hogarth FRSA (English, 1697-1764) was the most prolific engraver of black figures with at least one black figure in each of his major satirical series from The Harlot’s Progress of 1732, which in plate 11 includes a black child-servant wearing a feathered turban and a silver slave collar, to The Election’ prints of the 1750’s. They reflect Hogarth’s contempt for changing consumption patterns, turning objects of wealth, including black slaves, into symbols of corruption. The presence of the pregnant black woman, also in The Harlot’s Progress, serves to remind the viewer that the condition of female inmates in English gaols was not far different from that of black female slaves in the colonies. A black servant and a seated black child feature in Taste in High Life making a visual connection between the child as an object of display and the miniature teacup and saucer being admired.

As the popularity of tea-making grew so did the production of porcelain tea services, table ware and ornaments with the exploitation of slave labour presenting a darker side to the story of 18th century dining. The Chelsea porcelain factory (1743-47) produced an early figurine of a black African child with a lion, followed later by the allegorical figures of The Four Continents with Africa represented as a black child wearing Turkish inspired clothes seated on a lion. The figurine ‘Aesop Black, as Fabled?’ being a black man with large belly and bright pink clothes was produced in 1755 and the African man and woman figure group in 1765. Derby pieces included sweetmeat dishes with black male and female figures, a figurine of a black boy holding a large white shell.

Later in the century the new technique of transfer printing enabled high quality images to be printed onto tea caddies, cups, plates and sugar bowls, thus making porcelain more widely available even to homes that could not afford a black servant. One of the most popular was a design by Robert Hancock (English, 1730-1817) from the Worcester porcelain factory (estab. circa 1751, closed 1862) known as ‘The Tea Party’ which includes a black child servant pouring tea from a kettle into a teapot, interestingly his features are not as well defined as those of the pet dog! Similarly, black servants portrayed in mid-18th century Staffordshire figure groups typically display unflattering characteristics – protruding lower jaw, low and massive brow and very long arms. Though later ones such as ‘Man Friday’ and the black pugilist have more defined features. Coincidentally, as these images of black people became more widely available in homes throughout Britain in the late 18th century, debate about the use of slave labour intensified and a variety of wares became available to arouse sympathy for the slave. Large jugs and drinking vessels depicted family separation and cruel treatment or rhyming couplets, a popular one being

Health to the Sick, Honour to the Brave Success attend True Love, And Freedom to The Slave.

The inscription from Josiah Wedgwood’s medallion (token) of around 1787 with the words “AM NOT I A MAN and a BROTHER”, helped galvanise support for the abolition of slavery. The white and black cameo being transposed to jugs and teapots as well as snuff boxes, whilst a sugar bowl decorated with a kneeling female figure, adapted from the cameo, showed that women too were enslaved. A Liverpool teapot of 1775 has a short poem calling for ‘Freedom for the Slave’ and a Turner stoneware jug of 1800 (V&A) has Britannia offering comfort to a slave, instancing a traditional patriotic symbol with the new movement for the abolition of slavery.

The figure of the black servant in 18th century art was a product of its time formed under the conditions of slavery and though slavery was soon to be abolished the colonial attitude towards the black inhabitants of its empire took much longer to change.