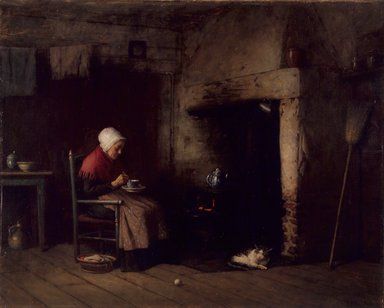 Since prehistoric times, the most rudimentary form of domestic lighting was provided by the hearth fire and lamps using a flame. This continued to be the case for some of the poorest people in England until the 19th century.

By the Middle Ages, the centrally placed hearth had become the hub of the house and household life revolved around it. The wealthy had the means to ensure that the wood for their fire place was kept dry and seasoned, while the poor had to make do with green wood collected where they could, which produced copious amounts of smoke and little heat. Generally, the fire was not allowed to extinguish, burning slowly all night and reinvigorated in the morning, making the walls and timber roofs sooty and blackened over time. Cloth covered windows or space between the roof timbers or shutters operated by a peg and cord arrangement, provided ventilation for the smoke to escape in some houses, although the danger of fire was forever present.

There was concern about the depletion of forests particularly as oak, ash and beech were needed for ship building. The populace was therefore encouraged to use coal for fires and in 1698 a foreign visitor noted “None but people of the first quality burn wood in London.”

Fireplaces began to be built on a perimeter wall of the house in the 12th century evolving into an inglenook fireplace, where side walls covered with a smoke hood, were built to enclose the fire and give respite from draughts. It provided a cosy and warm place to sit, especially when benches were placed on opposite sides, so additional family members could share the warm space. Inglenooks were rediscovered during the late 19th century during the Arts & Craft period and can still be seen in some English homes today.

Chimneys rising clear of the roof were innovations introduced during the Tudor Period. As families became more affluent, cold stonewall fire surrounds were covered with wood panelling and tapestries, then decorative columns and pilasters. These mantlepiece surrounds provided a space to display ancestral coats of arms, proclaiming the family’s power and status and expensive brass candlesticks. In time the chimney piece was harmonised with the overall interior decoration of the room and designed by people such as Robert Adam.

Accessories associated with the hearth include fire-pans. If the fire went out, the fire-pan could carry embers from one fire hearth to another. Tongs and forks were necessary implements for wood burning fires, whereas shovels and pokers were essential for coal fires. These accessories could be hung on a wrought iron gentleman’s fireside companion. A pair of andirons or fire-dogs were needed to support the logs.

Rolled paper spills and wax tapers would be kept on the mantel shelf for lighting your candle. Tinderboxes were used to hold easily combustible material or fitted with a flint and steel when needed to light a flame. A form of lighter was the strike-a-light that bore similarities in construction and appearance to a flintlock pistol. Although fire pistons and brimstone matches were developed, it wasn’t until 1826 that the wooden friction match and later the Lucifer phosphorus match were introduced. The first commercial production of the safety match in England was in 1855 by Bryant & May and by 1886 the company was making 300 million matches per day.