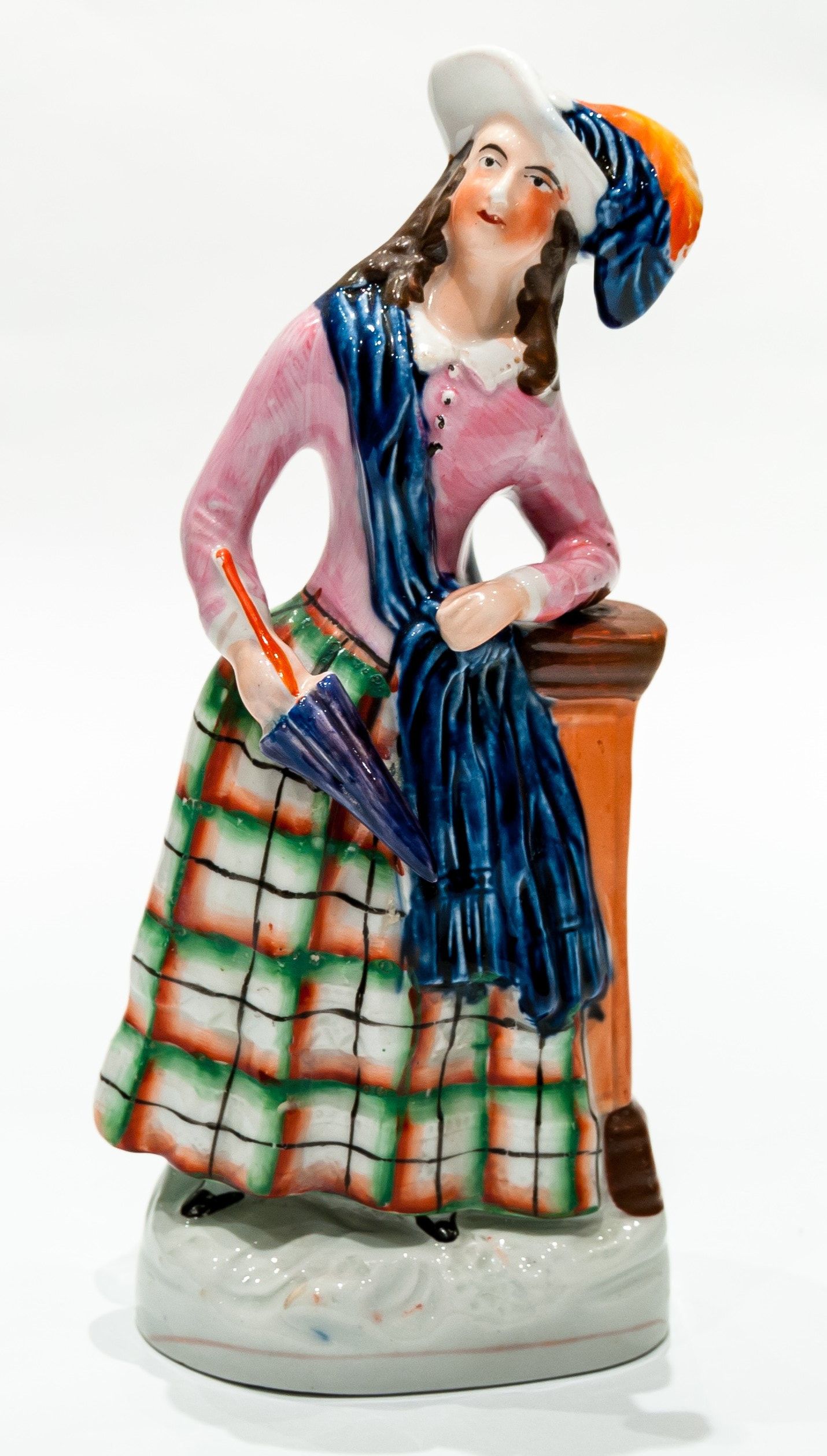 Staffordshire figurines from the late 1840s to the early 1850s included, among many notable people, theatrical figures in their roles. in addition to numerous Shakespearean characters, a popular figurine character was Jenny Lind, the ‘Swedish Nightingale’ of whom there are at least eighteen different versions in Staffordshire.

Jenny Lind was born in Stockholm in 1820 and became a leading figure in opera houses in Sweden, Germany and France before appearing as Alice in Meyerbeer’s opera Robert le Diable at Her Majesty’s Theatre on 4 May 1847, in the presence of Queen Victoria. The Times reported it as a “never [before] witnessed scene of enthusiasm” and Lind was an immediate star. During her two years on the London stage, she performed in most of the standard repertoire including Marie in the Donizetti operetta The Daughter of the Regiment.

The Johnston Collection has a female figurine thought to be Jenny Lind as Marie in The Daughter of the Regiment. Marie is the central character of The Daughter of the Regiment, a work first performed in 1840 and still very popular. There are many depictions of Marie, sometimes in military dress with or without a drum and sometimes in evening dress which she wore in Act 2.

The Collection piece is an earthenware figurine with enamel, glaze and gold, brightly-dressed and wearing a wide-brimmed hat. The figure also wears a green, red and black checked or tartan skirt with a pink bodice and a brilliant, rich, underglaze cobalt blue sash with matching parasol and hat plume, the colour is a popular feature in figurine production from the accession of Victoria until the 1860s. The fabric pattern, a stylised tartan, appeared on many Staffordshire figures including that of Queen Victoria herself, and members of the royal family. Tartan was becoming popular at this time although the Staffordshire painters may not have actually seen an example.

Theatrical figures were for the most part untitled. One theory for this is that their costume indicated their role and identified them. A depiction of Jenny Lind in character may have been for publicity, like photographs today, and certainly there are many images and figures of her in character. Other figures, possibly of her, came as one of a pair and were possibly more decorative in purpose and, as in this case, the male figure is in a complementary costume. Her companion wears a pink frock coat, white waistcoat and black and white trousers. He also has a broad-brimmed white hat with a large blue plume and both figures lean on architectural pedestals; one posed left-handed, the other right-handed. He does not resemble any character from the opera.

Engravings were used which were thought attractive and which happened to be portraits of actors of the day and the accompanying figure did not necessarily portray a real person or even a character. A search of images in various references has not produced an identical set to these but there are many similar, in colour, costume and pose. Together these figures make a pretty pair with the story adding interest.