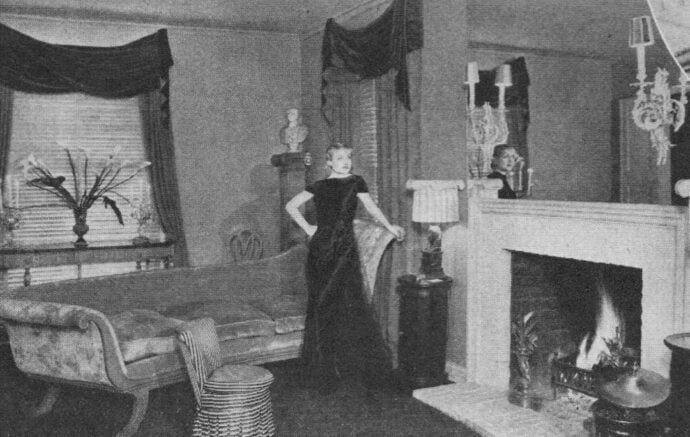 Previously my design contribution to fairhall focused on the gracious colonial and restrained federal American furniture of the east coast. This time I have taken a cue from The Pet Shop Boys and gone west.

Not to the streetscapes of San Francisco where they wear flowers in their hair but the glam abodes of the sunny southern Californian set. So, get your diamond-encrusted smartphones out, Paris Hilton approved shades on, and those soft tops down on your convertible roadsters as we travel, metaphorically speaking, through the palm tree lined boulevards of La La Land!

Twentieth century design is replete with tales on the advent of modernism – that severe rejection of all things decorative, emphasising design for the everyman (or woman), and materials selected for their pure geometrical forms – that less is more mantra with function following form and houses sterilely viewed as machines for living, promulgated by Le Corbusier, Frank Lloyd Wright, The Bauhaus school set et cetera. Hollywood Regency is the antithesis. The less known and underappreciated design philosophy embraces not abandons the timeless chic of Regency classicism – whether pared down neo-classicism, sometimes referred to as Neoclassical Moderne (a neo-Grecian version of art deco) or vamped up to Regency revival.’

Perceptibly the namesake derives from ‘the movie-making industry of southern California typified by the celebrity abodes and actresses of Hollywood’s Golden Era, roughly spanning the 1920s to 1950s, and exemplified by the work of designers like: Dorothy Draper and William ‘Billy’ Haines.’ Rochelle Greayer eloquently explains Hollywood Regency as ‘glitz and glamour covered in lacquer, chrome, and mirrored finishes.’ Every detail exudes luxury and ‘there is always a feeling people should look good in design – particularly if they are wearing satin bathrobes and sipping a cocktail.”

Dubbed the father of Hollywood Regency, Haines, a well-known friend of Dorothy’s stumbled – or was rather forced – into interior decorating, after curiously for the times, refusing to submit to a studio-mandated ‘lavender marriage’ to cover up his sexuality and abandon his long-term beaux. Haines’ close-knit friends, a feisty band of Hollywood starlets, assisted with the networking and early commissions, and seemingly overnight he became a Hollywood success story, designing interiors for everyone from Joan Crawford to Ronald and Nancy Reagan.

Still under contract at MGM, Haines opened an antiques shop in 1930. His shop-studio displayed antiques in room settings, assisting clients to visualise how items could look in their own houses – the Hollywood version of William Johnston’s Kent Antiques in High Street Armadale perhaps. Billy’s big break came decorating actress Carole Lombard’s new abode, after her divorce from actor William Powell. Taking a gamble, he refused to charge the actress, bargaining that the publicity would be payment enough. The bet paid off and his newly launched business became the talk of Tinseltown. Motion Picture magazine evocatively described Lombard’s redesigned interiors as ‘no place for tweeds or slacks, but a perfect setting for trailing tea gowns and evening dresses!’

Competing with Haines for film-star interior-design commissions was Dorothy Draper – judged ‘the mother of Hollywood Regency style and the decade-defining decorator of the 1940s.” Dorothy freshened dark tired period styles with lashings of white coats of paint, black lacquer and lots of oversized botanical prints and stripes. Her bold and often feminine colour schemes modernized baroque and regency styles, softening and simplifying them to create a unique, Americanised version of traditional period style.

Liberace championed Hollywood regency unsurprisingly taking it to the extremes – perhaps more Hollywood neo-baroque with regency flourishes – though surprisingly his varied residences, admittedly some more architecturally Spanish mission or mid-century modern, had as many restrained French and English Regency furnishings as over the top mirrors dripping with gold-gilding or ormolu. Liberace and his entourage held late night antique polishing parties after performances – to see what decorative treasures hid behind layers of dirt, grit and dust, acquired from recent antiquing jaunts. Mr. Showmanship would have no qualms taking an US$40,000 chandelier and spray-painting it gold – relishing in the self-described title of “king of palatial kitsch.”

For the 2013 biopic Behind the Candelabra – exploring Liberace’s five-year secretive love affair with his male chauffeur, Scott Thorson – 100 chandeliers had to be tracked-down from across the globe. The filmsets of his LA, Palm Springs and Las Vegas residences were replete with art, mirrors and statuary – both the interiors and exteriors. Sculptures appeared in every room with set designers confessing to “swooped[ing] up every single naked David statue in Hollywood, from mini to giant.”

During the swinging sixties and disco seventies Hollywood regency became more abstracted and masculine particularly in California, à la Palm Beach style. American interior designers from the 1970s were quite into patterning – pattern on the walls, on the windows and pattern on the furniture etc.

Classic Hollywood regency was not restricted to Tinseltown and remnants can be traced to The Land of Oz – no not that one – a select number of examples are evident in Australia. Two National Trust properties – Rippon Lea in the inner-city suburb of Elsternwick and Mooramong, in Skipton – Victoria’s Western District, exemplify aspects of the style.

When Mrs Louisa Jones inherited Rippon Lea from her father in 1935, she updated the interiors to the voguish Hollywood style. She hired celebrity local interior designer, Mrs Dolly Guy Smith, of the Myer and Rocke Company - Australia’s answer to Dorothy Draper! Indeed, Liberace himself would have approved of the white-lacquered baby grand piano in the 1930s drawing room and the colonnaded director’s style swimming pool.

Mooramong was home to millionaire grazier Scobie MacKinnon – of the MacKinnon Stakes fame – and his former Hollywood silent screen star wife, Claire Adams. After a brief three-week whirlwind romance, the couple married, with Claire abandoning fame for love. The couple soon set about creating their own private Beverly Hills compound in the Aussie bush, transforming the 19th century neo-gothic Mooramong homestead into a fashionable abode redecorated ‘in the moderne style with art deco elements and Regency accents.’ Claire commissioned Melbourne based architect Marcus Martin to undertake the renovations.

Rosemary Weatherly, whose mother was a regular attendee at Mooramong parties, recollects the “spectacular bathrooms.” The private ensuite had a gigantic shower, complete with a large rose-head cap and two others to spray you from both sides. Befitting a Hollywood starlet, light bulbs flanked the mirrored vanity cabinet, and the toilet had a matching bidet. Once a plumber was called out to the property and went away thinking the couple were “most peculiar having two dunnies” – so they could chat to each other while doing their business!

The hoi polloi of the Western District affectionately recounts summers spent splashing and frolicking about the McKinnon’s swimming pool, reputedly then the largest heated private pool in Victoria. Patricia McKenzie recalls as a twelve-year[1]old going into the adjoining dressing rooms, to put on not her own bathers but ‘Aunt Claire’s,’ complete with swimming cap, and smothering her face with Elizabeth Arden face cream, which was always in abundance, before plunging into the pool pretending she was Esther Williams!

Claire ‘never scared of a mirror’ liberally scattered looking glasses throughout her boudoir along with ‘marvellous satin brocades and overstuffed pillows with all the trimmings’ evoking luxury and quality but equally comfort and homeliness. Nothing was overlooked. Even a Steinway piano was ordered for the couple, but allegedly sent back because it was not white enough – like the ones in Hollywood she was more accustomed to. Steinway refused her request to deliver her a white lacquered one – so she had to settle for customised walnut instead.