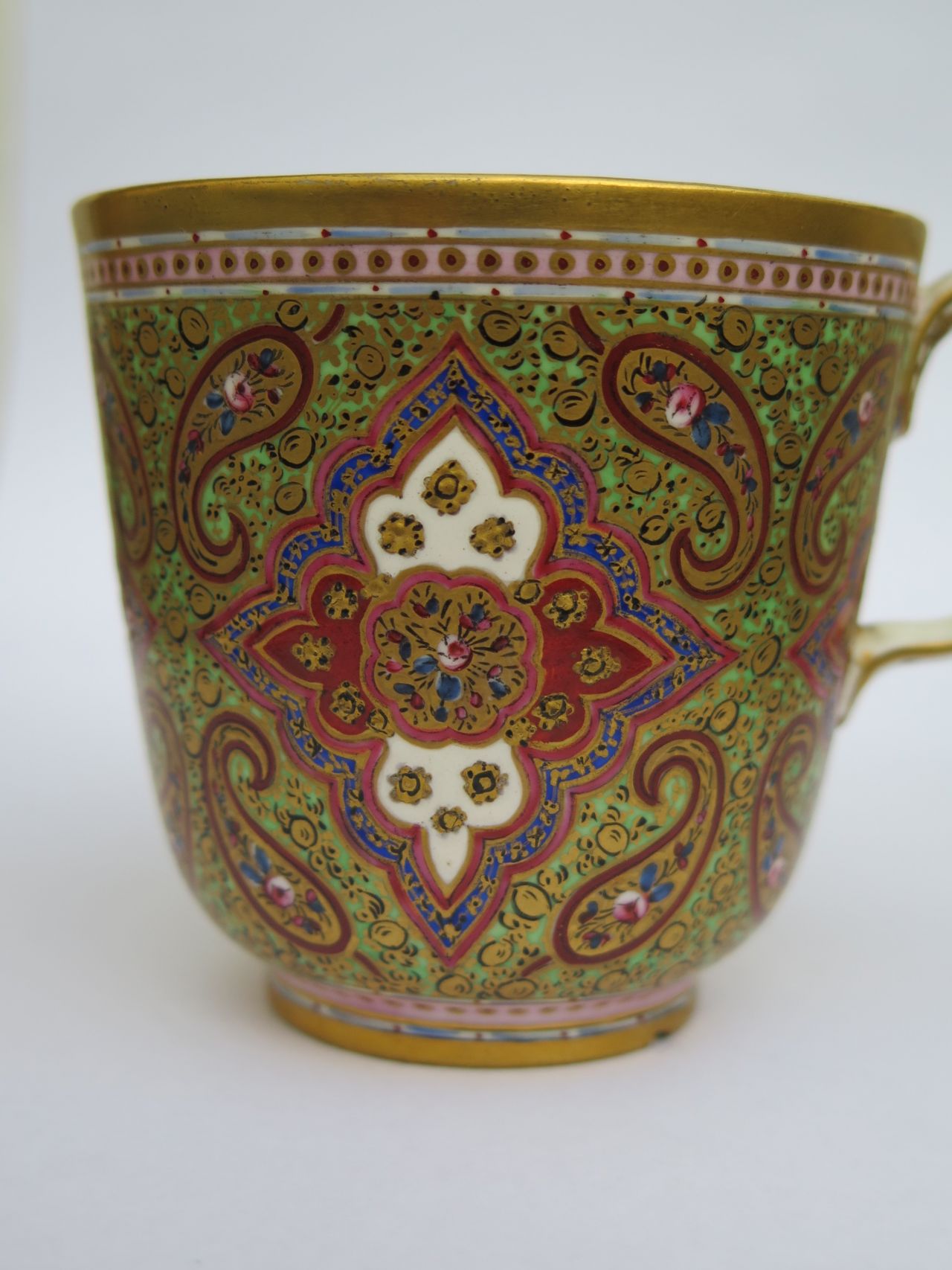 We probably have all worn something with the paisley pattern, particularly if we lived through the sixties and seventies, but have you ever wondered where that simple shape, like an elongated teardrop with a bent over tip, originated?

It has been likened to the shape of a mango, and in India today it is often called the mango pattern. To the weavers of Paisley, it was the ‘pine’, its shape reminiscent of a pinecone. However, the consensus of opinion seems to be that it represents a growing shoot of the date palm, which looks very much like the tight curl of a bracken frond as it unfurls (though a cypress tree is also a contender for the beginnings of the shape).

It seems to have originated in ancient Babylon, in present day Iraq, probably around the 7th century BCE. Babylon was the administrative capital of the Persian Empire, so it is not surprising that the motif is often said to have originated in Persia. The date palm was fundamental to life in this region as it provided food, wine, thatch, wood, paper and string, so not surprisingly it was seen as the tree of life. Thus, this simple shape derived from the date palm represented the renewal of life itself.

From its original home, the motif spread both east into India and west into prehistoric Europe. Traces of the motif can be seen in the decorative arts of many western European cultures, however the arts of these cultures died away under the influence of the classical motifs of Greece and Rome. In contrast, the motif endured in India, appearing on textiles, embroideries, tiles and carving, becoming an important element in early Indian art.

Late in the 17th century, shawls including the motif began to be woven in Kashmir in northern India. At this stage the motif was delicate and naturalistic, and by the early 18th century it had developed into a tightly packed pyramid of flowers above a ‘vase’. The name still used in India for this design is buta (or boteh) meaning flower. These shawls were worn by men and were so highly prized that princes would gift them to others of high rank. This brought the garments to the attention of officers in the British East India Company who began bringing them back to Britain as gifts for their womenfolk, and they were immediately appreciated.

There has been a popular belief that Kashmir shawls first came to the notice of fashionable European ladies through being brought back from the Near East by Napoleon and his soldiers. It is clear that shawls were fashionable in Britain long before this – in fact this is one example of the English being way ahead of the French in the fashion stakes. For example, in 1767, the novelist Laurence Sterne mentioned in a letter that shawls were a fashionable item. However, there were two barriers in the 1770s to shawl ownership, price, as each could cost 200-300 guineas, and scarcity, as it took two to three years to complete a shawl using the traditional twill tapestry hand weaving technique.

Thus, it is not surprising that British manufacturers began to make shawls ‘in imitation of the Indian’, very often including the buta motif of the Kashmiri shawls. Between 1775 and 1785, shawl making began in Edinburgh and in Norwich with patterns either darned in, woven, or printed. By the end of the century shawls were becoming de rigeur for fashionable ladies as they suited the white muslin and fine cotton dresses of the Regency period.

From about 1820 the town of Paisley, near Glasgow, became the largest centre for shawl production in Britain. Technical advances in weaving and changes in shawl dimensions meant that as fashions changed, the shawl was able to adapt and its popularity increased through the early part of the 19th century until the 1870s, by which time it was more common to see a shawl draped across a piano or made up into a dressing-gown.

As Paisley was the major centre of production, its name became attached to all shawls manufactured in Britain, and as so many shawl designs included variations of the Indian buta motif, paisley also became the popular name for the design which has endured to this day.