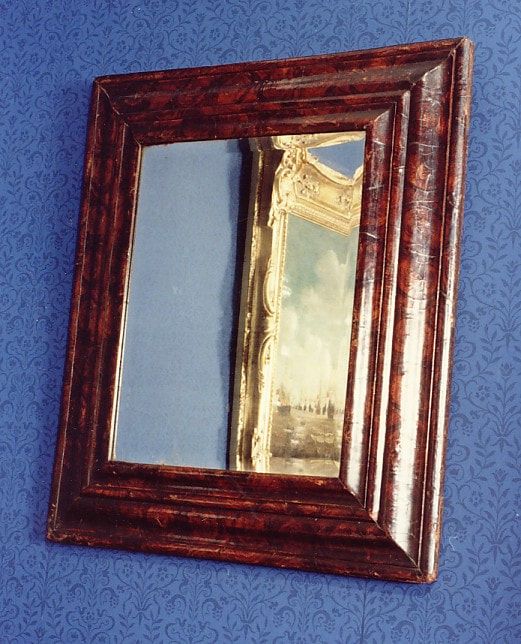 Today we make mirrors for granted but in the late 17th Century, when this mirror was made, they were rare and extremely expensive. A mirror of 1 metre by 90 cm would cost the equivalent of $38,000 in today’s currency.

Rudimentary mirrors, made from bronze, silver, gold, tin and volcanic glass, have been retrieved from early graves and depicted in art forms from ancient civilizations. These included the Maya and Aztec, where they were used in religious ceremonies and the Egyptian, Chinese and Roman, where they monitored personal adornment.

However, the European Church clergy treated them with suspicion, regarding them as ‘seeing into the soul’. It was thought that an ill person’s soul, might escape into the mirror, so the tradition of covering mirrors in sick rooms emerged. Similarly, house mirrors were also covered where a person had died, but hadn’t yet been buried.

Before the mid-17th century, Venice had the monopoly on the supply of glass mirrors. In 1291, Venetian glassmakers were moved to the island of Murano, where they were virtually kept prisoner and where escape and subsequent capture, could mean death. Some did escape and eventually took their skills to France, Germany, England and the Low Countries. By 1571, a Venetian craftsman had set up a glass works in London, followed in 1618 by Sir Robert Mansell, with the help of the Duke of Buckingham, who obtained a patent to establish a glassworks, employing Venetian glassmakers.

Early mirrors were small, but in 1670, a Frenchman Bernard Perrot, developed a casting method, producing larger glass sheets. Soon afterwards, in 1676, George Ravenscroft invented lead crystal, by adding lead oxide to the molten glass. With the Restoration in 1660, Charles II introduced new fashions to English society. Louis XIV, the ‘Sun King’, established a glassworks at Tourlaville and Charles, who had been exiled in France, acquired mirrors for his now fashionable English court, leading to glass works being established at Vauxhall in England.

Large mirrors were so popular with the rich, well to do, that the English glassworks were not able to keep up supply and many were imported from France, despite the 20% tax levied by English authorities. Smuggling mirrors across the channel was rife, to avoid the tax.

The backs of mirrors were coated or ‘foiled’ with tin foil, ‘fixed’ with mercury, which was toxic for glassmakers. In 1835, a German chemist learnt to apply real silver as the reflective medium, thus protecting them from poisoning.

The mirror shown possibly dates to William and Mary’s reign, (1689-1694) and is in good condition. The silvering has survived intact and the glass appears to be original, although the sharper bevelled edge may have been worked later. The body of the frame would be pine, with mortis and tenon joints. It is veneered with ‘oyster cut’ walnut, applied in small circular sections. As the wood is very dark, it may possibly be another wood, such as olive. It is likely that a crest was present on the side. The soft square ‘Cushion’ shape was popular at the time. As the use of mirrors increased, houses would benefit from added reflective light from fires and candles.