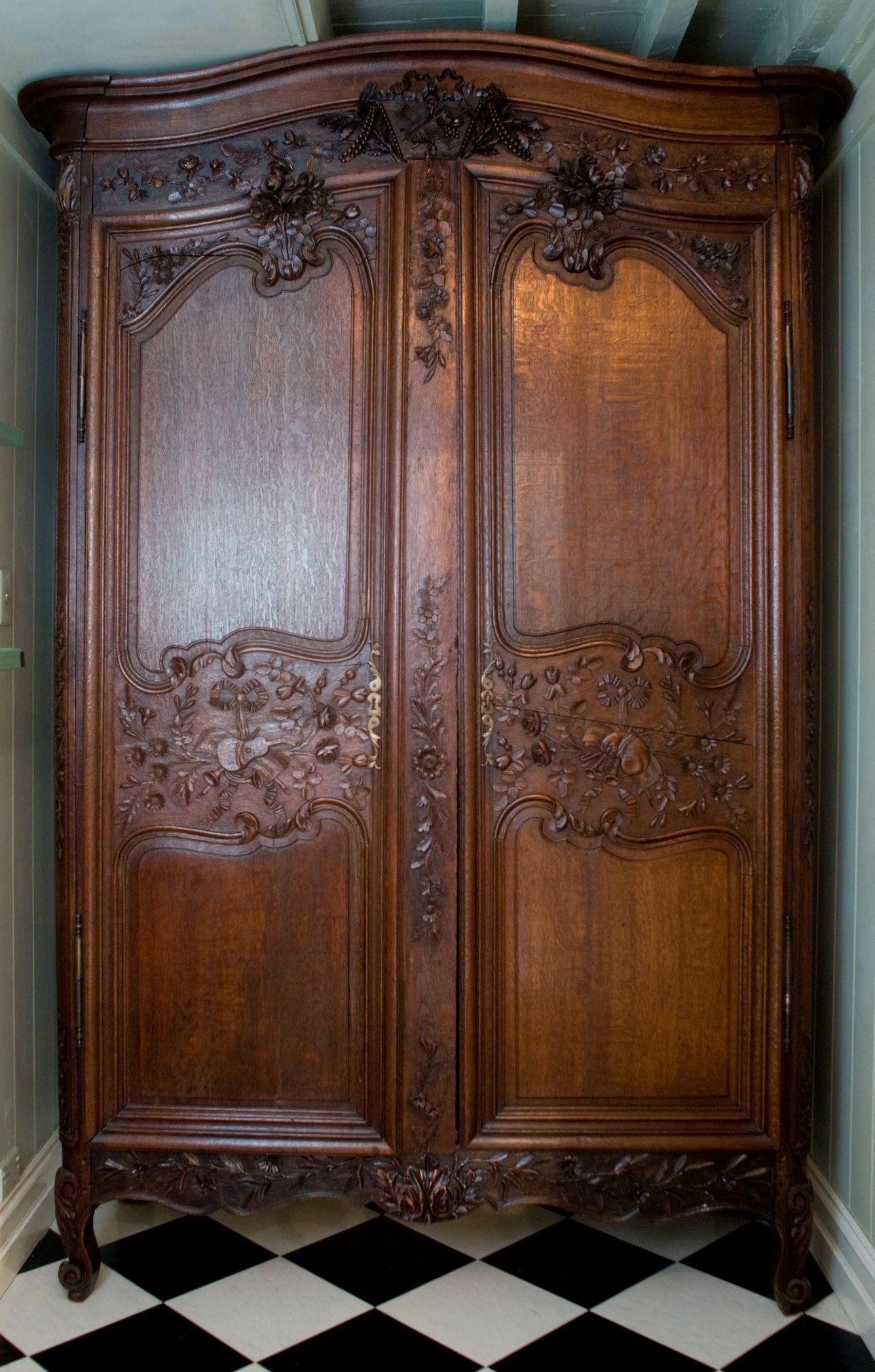 An armoire is a two-door cupboard resembling a wardrobe. initially, as the name suggests, it was for the storage of tools or arms but later adapted for many diverse storage uses including clothes, silver, porcelain and books. in the 18th century, Parisian furniture was often very lavish and veneered and from the late 17th century, the most lavish of all were made by the skilled craftsman and designer Andre Charles Boulle.

Boulle, a versatile artist, is best known for furniture decorated with an elaborate marquetry of brass and tortoiseshell. The majority was manufactured in the country by a menuisier (joiner) and was made of solid native woods such as oak, walnut, beech, wild cherry, olive and ash. The doors may have been solid wood, glazed or brass tressilaged backed with silk, to minimise dust. Some were heavily carved, revealing the interest of the owner. Some were plain oak or pine and furnished the homes of the bourgeoisie and the less important rooms in a palace.

Although an armoire is often classified as movable, because of its size, it was often semi-permanent. The exceptions would be those pieces with mortise and tenon joints which could be disassembled and transported on a horse and cart – an early ‘flat pack’. Then there were those that were carved to match the boiserie (carved wall paneling). Today of course an armoire is usually divorced from its original setting.

The construction is mortise and tenon, a technique used before glue was widely available. The mortise and tenon joint is one of the oldest methods of joining two pieces of material such as wood, stone (Stonehenge) or metal. It is still used today in the manufacture of fine furniture. The mortise is a slot or hole cut through one piece of material and a tenon is an extension or peg milled on to a corresponding piece of material that is fitted into the mortise to make a joint. A well-made, deep, snug-fitting joint was very strong and defined as a fine menuisier.

The first glue widely used was animal collagen with large specialised glue factories established in Europe at the end of the 17th century. Usually made from bones it was widely used until the manufacture of synthetic glues, at the beginning of the 20th century, began to change the market.

The TJC armoire is known to have been located in William Johnston’s property Chandpara at the time of the inventory following his death.