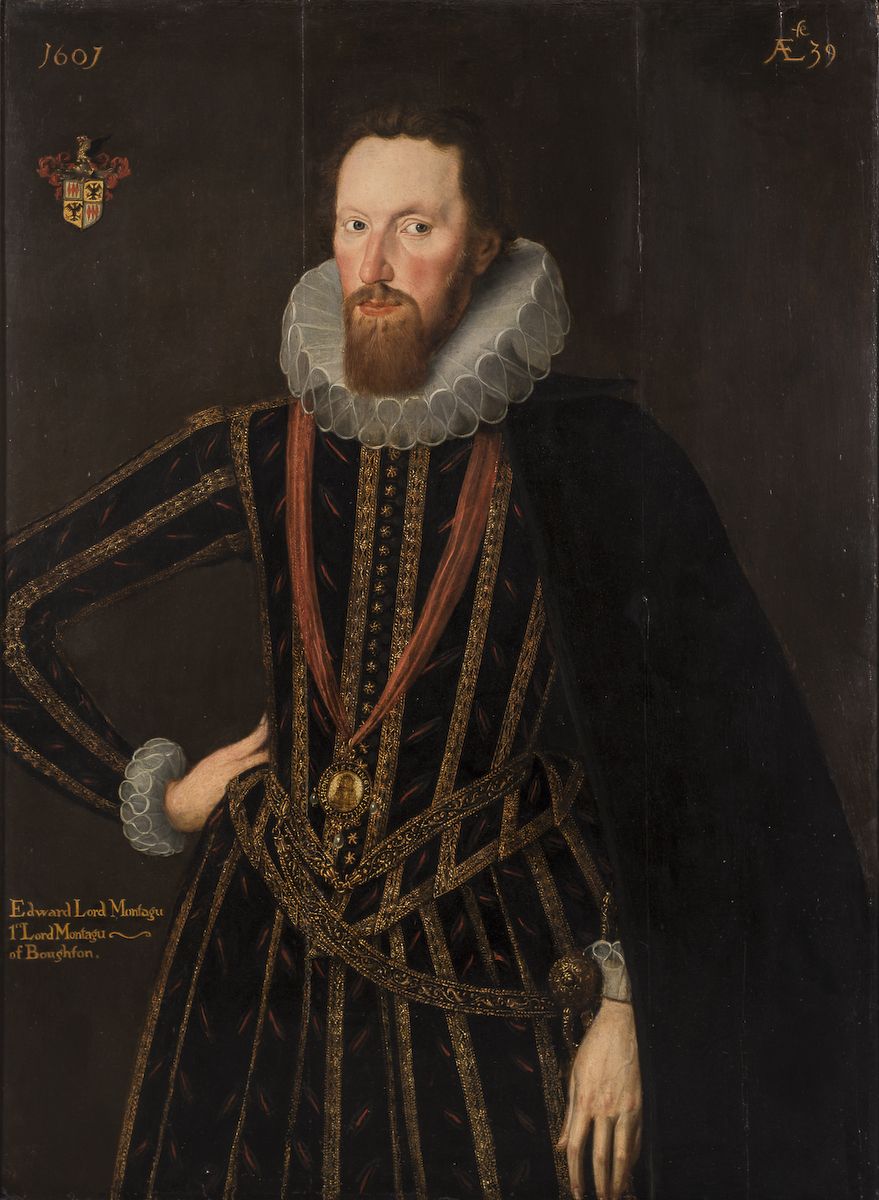 Edward, first Lord Montagu (c. 1562 – 1644) – doyen of a leading Northamptonshire family and classic example of the phenomenal rise of the English gentry in the years 1540 to 1640.

In 1949 William Johnston attended an auction of the house and contents of Kimbolton Castle in Huntingdonshire. He came away with two of this collection’s treasures, the Mary Beale portrait of a woman (A0954-1989) who was possibly wife of one of the Montagu family, and a portrait of Edward, first Baron Montagu, attributed to Robert Peake the Elder (English, circa 1551-1619).

Peake is notable as one of the few native-born artists of the period who attained the high standards of the expatriate artists who dominated the English scene at the time. He was prominent by the 1580s and was appointed picture-maker to Prince Henry, heir to the throne, in 1604. He was appointed a sergeant-painter to King James I in 1607. He was amongst those who developed a style of full-length costume portrait of which Waterhouse says (Painting in Britain, P 41) “There is nothing like them in contemporary European painting.”

Our painting is oil on board and is in good condition having suffered very little restoration. It shows Edward Montagu in serious mien wearing the insignia of the Order of the Bath to which he was admitted as a knight at the coronation of King James 1 (with a number of others). This is not to be confused with the current order which was recreated by King George II in 1725.

The inscriptions are difficult. There is a date. Perhaps it is 1601 or 1607. His age is given in the top right-hand corner as 39. If he was born in 1562/3 as we believe, this would give a date of 1601/2 which might fit with his inheriting Boughton House, the family seat, in 1602. However, the Bath insignia would then have been added later. The wording indicating the first Lord Montagu was obviously a much later addition because he only became a peer in 1621.

The arms are tricky. Montagu’s grandfather had claimed arms with a heraldic pun on the Italian “monte acuto” (pointed mountain) and had played with a descent from the failed line of the Earls of Salisbury in the fourteenth century. When our Edward Montagu succeeded his father in 1602, he added what is called the Monthermer eagle to the arms and claimed descent from John Neville, first Marquess of Montagu who died in 1471. In 1605 he was challenged by Anthony Browne, the 2nd Viscount Montagu, in the Court of the College of Heralds, and lost. But our portrait still shows the arms. The current Somerset Herald cannot tell me where the eagles come from.

The Montagu family is a classic example of the way so many families emerged from regional obscurity to national prominence in only three or four generations at this period. The Montagus came from minor gentry and in four generations became Dukes of Montagu. The first knight was an able lawyer who helped Henry VIII with the details of the dissolution of the monasteries, became a Chief Justice and the owner of significant parcels of land in Northamptonshire, especially Boughton House.

The heir, another Edward, and another lawyer, was a leader in the county and was knighted between 1568 and 1570. His son and heir is the subject of our portrait.

So, what do we know about him? Thanks to the help of Andrew Thrush, who has been writing him up for the History of the House of Lords, we know a good deal more about him than in past years. We know he graduated BA from Christ Church, Oxford in 1579, studied at the Middle Temple of the Inns of Court in London from 1581 until 1585 and first married in the latter year. He married three times and fathered four sons and a daughter.

From 1587 he carried on the family tradition and exercised an enormous number of duties in the county. For years he served on the bench as a JP, was High Sheriff for a time, Captain of Militia, and Chief Forester of the huge Rockingham Forest. He was elected to the House of Commons six times from 1584 to 1621 and was a member of the House of Lords from 1621 until his death in 1644. He was one of the key founders of Guy Fawkes Night celebrations sponsoring a bill through parliament to give thanks to God for the escape of King James I and parliament from death by explosion in 1605.

Montagu was a notable parliamentarian in both houses, assiduous in attendance and very proud of his record. There would have been few, if any, members whose attendance record was better. He spoke rarely but with effect. As a result of his dedication, he was appointed to a staggering array of committees. In the parliament of 1628, he was on 35 of the 52 committees created in the House of Lords, many of them relating to religious matters or procedure. Even King Charles I described him as a “good parliament-man”. He was always a stickler for proper procedure.

In the reigns of both King James I and King Charles I the monarch constantly sought to raise funds without the approval of parliament (which would have attached conditions about spending or religion or court behaviour). The selling of peerages raised a lot of money for King James: on one day in 1605 he created or promoted eight peers!

There is a mystery surrounding the creation of the first Baron Montagu of Boughton in 1621. Did he buy it? The going rate was £10,000. Andrew Thrush’s theory is that when Edward’s younger brother became Lord Treasurer and hence Viscount Mandeville (and later the first Earl of Manchester, the owner of Kimbolton Castle), it was intolerable for the head of the family to be on a lower social level than his junior. So, he asked the King for a peerage – and presumably paid up. Although King James thought he “smelt a little of puritanism” he agreed and Montagu duly became a baron. It is interesting to speculate that he may have resisted the temptation to double the payment and become an earl! He would no doubt have regarded such expense as scandalous …

Edward Montagu was a deeply-committed Christian, a moderate puritan, who cared deeply about proper maintenance of the clergy and churches, proper observance of the Sabbath, the preaching of the Gospel, simplicity in religion and with a fear of Rome and the continuing influence of the Catholic Church in English life. He persuaded the House of Lords to petition King Charles for a day of fasting and prayer to reverse the failure of England to achieve success in the war against Spain. The King agreed and he then tried to get the House to petition the King to take a harder line on Catholic non-attendance at Church of England services. The House and the King agreed but little was done.

He was always a King’s man. As a result, in 1642 (at the age of 80) he was arrested and placed in the Tower. Compassion prevailed and he was placed in house arrest in the Savoy where he died in 1644.

The Oxford Dictionary of National Biography says of him: “A strict upholder of the Church and its ceremonies, and of the Book of Common Prayer, Montagu led so severe and regular a life that he was frequently reckoned among the puritans. He was a hospitable neighbour, a good landlord, and a firm administrator of justice. He was no courtier, though regular in his attendance in parliament, was rarely at Whitehall.”

William Johnston must have chuckled to himself as he brought these trophies back to Melbourne to give character – and perhaps a touch of pedigree – to his own Fairhall.