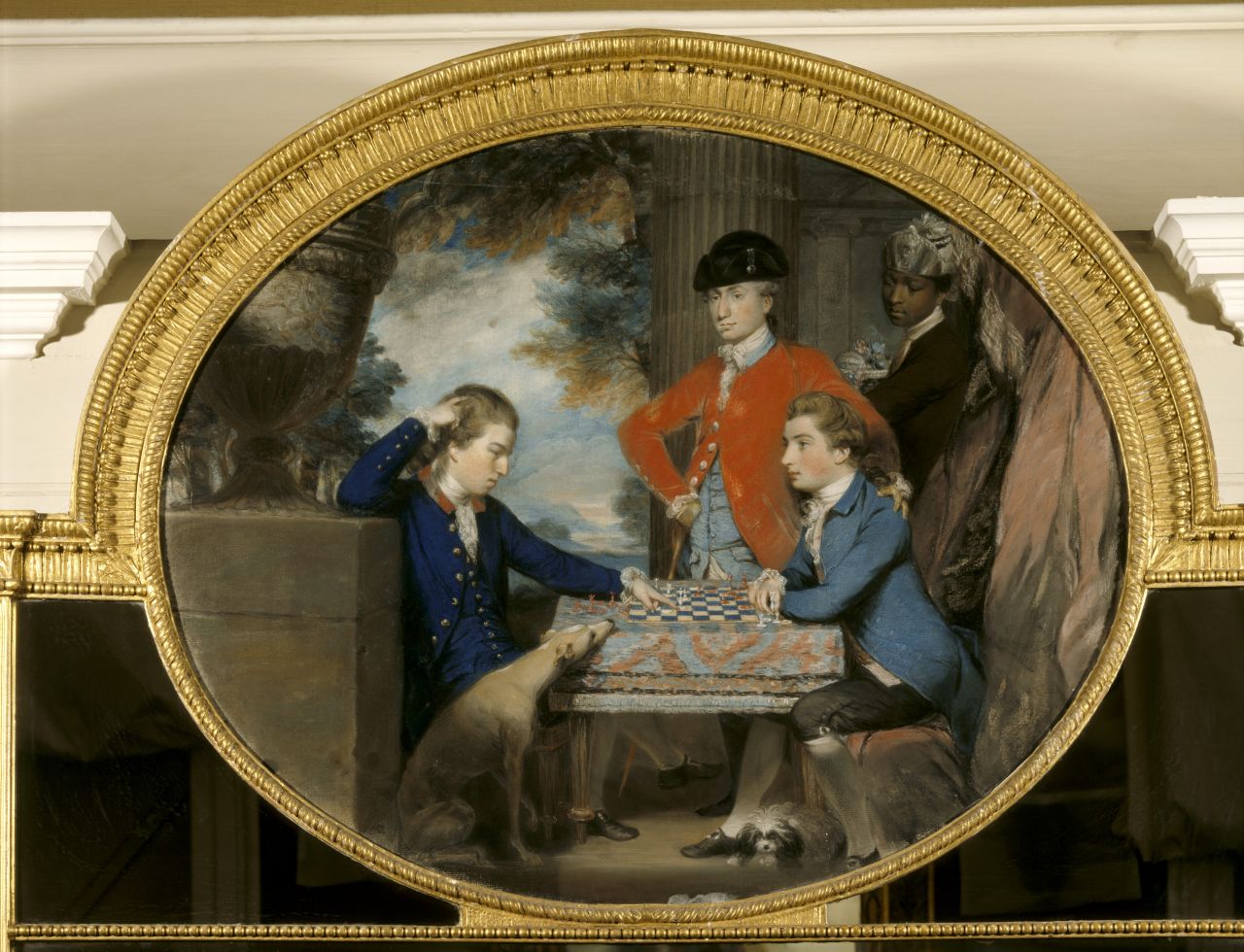 Macaroni men were the swaggering big-haired, sharply dressed show offs of the last thirty years of the 18th century. It’s a word rarely encountered today although it’s in the back of your consciousness within the famous rhyme ‘Yankee Doodle came to town’. When he ‘stuck a feather in his cap and called it macaroni’ it referred to the poorly dressed or perhaps also slightly phoney North American troops during the conflict of the French and Indian War (1754-63).

But why macaroni? Macaroni men were cosmopolitan in outlook and had supposedly been on the Grand Tour through France and Switzerland to Italy, where they partook of Italian food including pasta. A ‘macaroni club’ is meant to have existed in London but this might be made up as part of a joke (there was also supposedly a ‘wet paper brigade’, an ‘ugly club’ and a ‘Mohawks’ club). Clubland was connected with gambling and feasting and the term ‘macaroni’ placed it in contrast with the masculine values of the ‘roast beef of England’. Pasta such as gnocchi or hollow tubes was connected in British minds with nonsense and carnival, as well as the idea of a ‘numbskull’ or an empty-headed person, a bit of a joker. It also referred to a mode of burlesque Latin poetry.

What did a macaroni resemble? They had very high hair with a toupee at the front, wore the modern French style suit with very tight sleeves and a high jacket, liked modish colours such as pink, green and yellow, continental textiles such as silks and velvets, wore thin slippers with rosettes or paste buckles and a tiny hat called a ‘Nivernois’ named for the French Ambassador in London. Accessories were important and included a very large nosegay or corsage, fine needle lace, snuff boxes made of materials from silver to porcelain, hanger swords of the new popular material stainless steel, and chateleines with seals and fobs dangling from their waist.

Who were they? Some were very wealthy and closely connected to the Whig aristocracy; Charles James Fox, later one of the most famous politicians of his era. Portrait painter to the future Prince Regent and his circle, Richard Cosway, was a wealthy socialite who came from humble beginnings. A freed slave known as ‘Soubise’ or Julius Soubise connected to the Duchess of Queensbury drove around London in his carriage before starting a riding academy in India. The court preacher, Rev. William Dodd, was a macaroni and famously executed as one of the first ‘white collar’ criminals. Swiss-born British-based painter Johan Zoffany was called one in his youth. Merchants in luxury industries such as the famous furniture maker John Cobb were included. There is some reference to landscape designer Humphrey Repton as a macaroni. And the famous Sir Joseph Banks was satirised as a macaroni, later having his scientific credentials ridiculed by his enemies for his youthful interest in dress and general dilettantism.

A part of the macaroni pose was generational. These younger men rejected the nativist rhetoric of their fathers and grandfathers as well as the general thrust of British male dressing. It is not the case that men in the 18th century wore only dark colours but it is certainly true that their preferred fabric was broadcloth, or what we now call super fine woollens. These can be dyed in a surprising range of colours but were not acceptable in a country such as France for court. It was often said that an English man had to purchase a whole new outfit on arriving in that country, and the English also loved Lyons embroidered waistcoats and Italian fur-lined jackets and capes. England did not have any active sumptuary laws so technically anyone could wear whatever they liked that they could afford. But England had very strict customs bans in order to protect its own textile industries. Many of the fine foreign clothes were smuggled in and court cases held as to whether gentlemen could wear their foreign-bought clothes.

War throughout the century also stopped people from seeing first- hand what the French or Italians were wearing. The Macaroni popped up straight after the Seven Years War (which ended in 1763) and people like Fox and Banks went straight to the Continent to see all the new ideas in art, architecture and fashion. This was also an extremely wealthy period for Britain with enormous wealth generated by the ‘nabobs’ in India and British naval supremacy on the rise around the globe. The great townhouses of 18th century London such as Spencer House were built in this period: you may have seen the glass drawing room from Northumberland House (now in the V&A) in which raspberry foils are placed behind to simulate porphyry stone. The Macaroni took their place in this new atmosphere of heightened luxury, urbanity and also a world perceived as more feminised than before. To moralists and emerging economists, too much of this money was flowing abroad.

The final reason that the Macaroni craze spread so widely, appearing in plays, joke books, squibs, ditties, on painted glass, porcelain and textiles was that it coincided with the rise of the British satirical print. The British press had some controls but nothing like the continent and thousands of visual satires about politics, royalty, actors, even transportation to the colonies poured off the presses. All of the figures depicted therein wear clothing and a whole sub set of ‘satires of manners’ developed. These concerned dress fashions as well as fashions in all things – clothing, interiors, silver, carpets, assembly rooms, drawing rooms, bedrooms and carriages. They suggested that people had become too far removed from nature and that they had too much money to spend. But they also speak of the energy, innovation, ingenuity, messaging, ‘self-fashioning’ and complexity that dress-fashion both embodies and enables. In a way, Macaroni men became a message in and of themselves about the meaning of fashion in a general sense. Looking at depictions of them now we can only imagine the drama and flair they brought to the urban street.