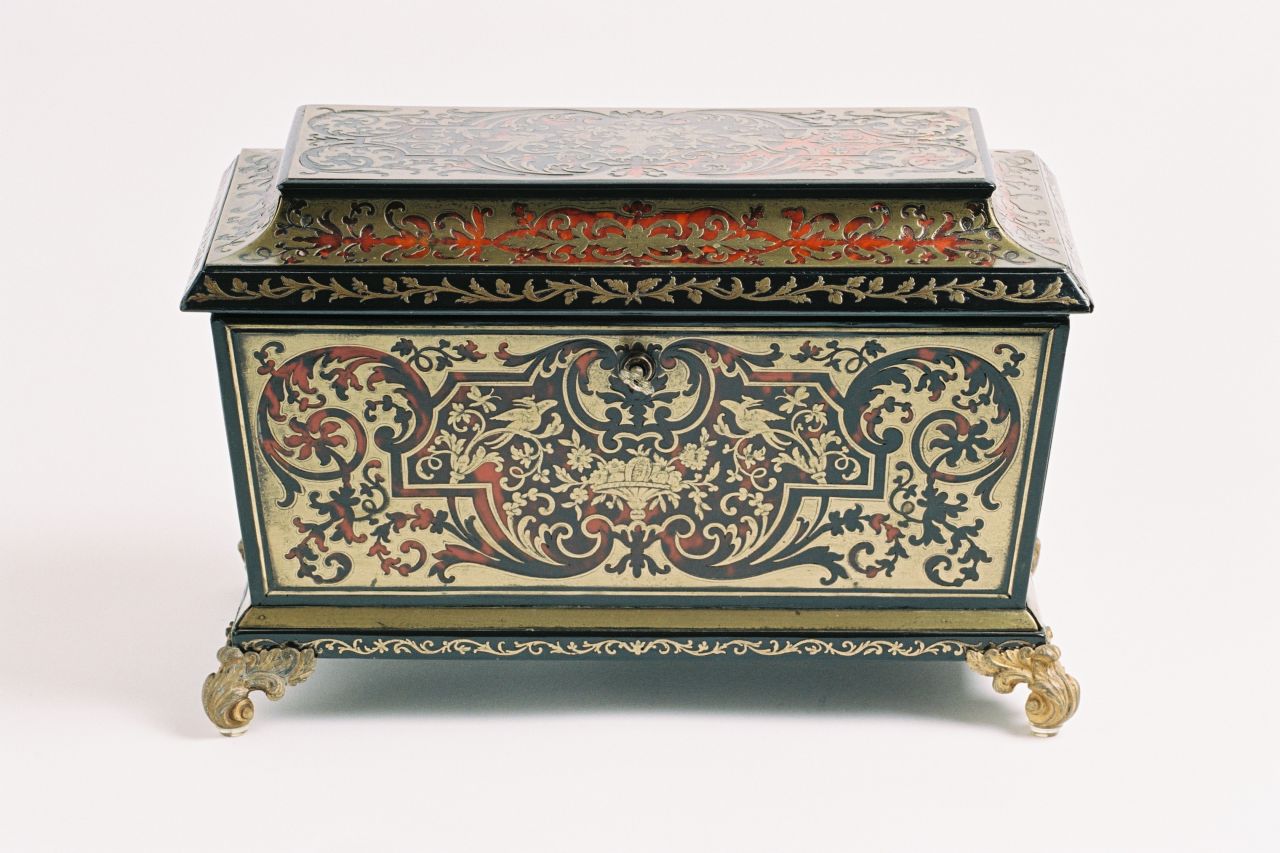 Although Boulle was born and died in Paris, his name was of German origin. His father, Jean Boulle | Johan Bolt, had been born in the Duchy of Guelders in the Netherlands.

Like his father, he became a ‘menuisier en ebene’, but his expertise made him the most famous of his family, becoming a ‘maitre’ (master) before 1666. By the age of 30 he had been granted lodgings in the Louvre on the recommendation of Louis XIV’s minister of the arts, Jean- Baptiste Colbert. This was a royal privilege for the most favoured in the profession, but Boulle was also given the title of ‘Ébéniste, Ciseleur, Doreur et Sculpteur du Roi’ (Cabinet Maker, Chaser/Carver, Gilder and Sculptor to the King’) which allowed him to work at all these skills without interference from the trade guilds. (According to his records of sales, Boulle was also a painter).

Boulle had many commissions, not only from the king, but also from foreign princes and wealthy French patrons. He worked from 1682-6 on the Dauphin’s apartments at Versailles, producing masterful gilt mirrors, parquetry, inlaid panelling and furniture marquetry. His oeuvre includes commodes, bureaux, armoires, pedestals, clock cases and lighting fixtures. These objects characteristically display beautiful gilt-bronze mounts, which were cast in the rough so that the chaser could provide their fine, sharp detail and jewel-like finish. Pieces from the Boulle workshops were not stamped, but many works in the 18th century in his style were also given the name Boulle or Buhl. The name ‘Buhl’ was invented by a British furniture maker/auctioneer referring to Boulle’s characteristic style. Despite his great fame, skill and financial success, Boulle was continually troubled by debt. He was a passionate collector of works of art and this negatively affected his already poor business practices. His situation was further strained by a fire in 1720 which destroyed 20 of his benches, his tools, models, materials and, tragically, some of his finished work.

Boulle’s renown is due to the consummate art of his marquetry, not only his exquisite floral designs in wood, but also his extraordinary skill and control in using inlays of brass or pewter with ebony or tortoiseshell. He placed gold leaf, et cetera, under the tortoiseshell for effect. He decorated brass work with chasing. Metals and chasing covered his making, protected corners, edges and feet, and provided fine decoration.

At a time of great craftsmanship, when glorious works were being created for the ’Sun King’, Boulle continually improved and refined his techniques and was considered to be one of the foremost craftsmen of his day.