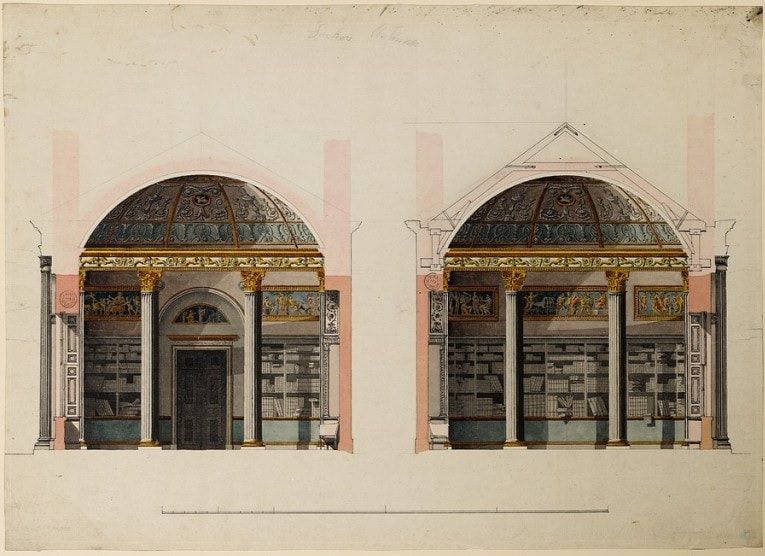 The installation of a library in wealthy 18th century homes arose to a large degree from The Grand Tour, young men returned not only with statues and paintings but many books.

These were not only for their continued education but also to share what they had seen with family and friends. Intellectual interests led to the creation of a dedicated room for hundreds, if not thousands, of leather-bound books and manuscripts. Architecturally designed libraries with mahogany bookcases were a feature of several of Robert Adam’s country houses, notably Luton Hoo in Bedfordshire - which was 144 feet long and contained 30,000 books – and Kedleston Hall in Derbyshire.

The main principles of library design stated that a viewer anywhere in the library ought to have a direct line of sight to every book so that the grandeur of the collection could be displayed at one view, delighting the senses. In the library at Castle Howard in Yorkshire books were bound in light tan, dark brown and black leather with gold tooled titles, many adorned with gold leaf patterns of flowers and leaves.

History, biography, philosophy, poetry, plays and dramas, atlases and travel accounts, as well as dictionaries would feature on the shelves alongside classics and first editions; reflecting taste, discernment and learning. Sir John Soane’s library contained books with prints and sketches of ruins from classical and ancient Greece and Rome, philosophies, histories and many religious tracts. Books were organised by theme and size whilst library catalogues were typically arranged in a systematic and orderly fashion.

Books were ordered from London booksellers such as James Fletcher, Thomas Payne, Paul Vaillant and Thomas Cadell all of whom were important in the supply of high-quality, foreign and rare books. These books were expensive and thus formed a typical area of elite male spending. When Edward, fifth Lord Leigh inherited Stoneleigh Abbey in Warwickshire not only did he commission plans for a large and impressive library but spent £1,600 in just five years on a collection which not only included rare books from France and Holland but useful volumes on gardening, parliamentary debates and algebra.

18th century book collecting was not confined to the upper classes, middle class gentlemen also assembled libraries, sometimes as a fashion item to be admired not read, but more often with a genuine love of scholarship. Booming publication saw volumes of travel, biography and science as well as novels being purchased from John Murray and James Lackington. Jane Austen’s father, George, had over 500 books in his study at the Steventon rectory, continually collecting not just classics but new editions which he read aloud to his family. Meanwhile Jane had to be content with shelves above a painted press in her dressing room for her collection of novels.

In Pride and Prejudice Mr Bennet’s possession of a library - a dedicated space as well as a private collection - is a clear indicator of status reflecting social development. Library furniture was being designed and made by Chippendale, Hepplewhite and Sheraton, not only bookcases and library tables but secretaire bookcases in mahogany and satinwood for smaller rooms. Sheraton even designed a set of library steps which folded down to form a table. Pieces from Gillows furnished many a middle-class room as the library/study changed in use from place of private study to a room for relaxing and entertaining friends. An advert in Ackermann’s Repository reads – “a sofa is an indispensable article of furniture, it not only ornaments but becomes a comfort when tired or fatigued with study, writing and reading”.