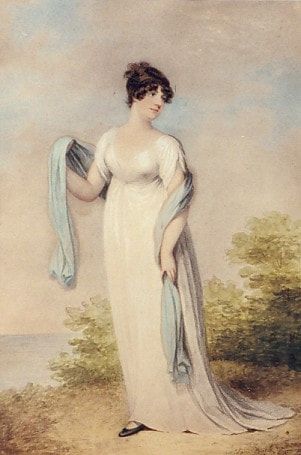 1800 – 1820 A new era in fashion began in France when Josephine Bonaparte wore her finely decorated white muslin dresses at court receptions, emulating the simplicity of Ancient Greek dress and denoting the purity of the French republican ideal, whilst exposing the female form to a degree which would have been unthinkable in the previous century. Her long sleeved, waistless wedding dress with a jewelled gold band under the bust was designed by Jacques Louis David and epitomised the Empire silhouette.

Periods of truce during the Napoleonic Wars saw a major influx into Paris of wealthy British families looking to buy the latest fashions, often thought to be of a higher quality than those obtainable in London. French fashion journals and fine silk from Lyon were also popular purchases. In England the years of the Regency became synonymous with elegance and style, London being the epicentre of its fashionable world. English women also adopted the Empire style, though for most their gowns tended to be fuller and more rounded in line as well as being worn with a petticoat which made them less revealing than the sleek, sometimes opaque French fashions. Not surprisingly the English were equally enamoured with the simple democratic muslin which was manufactured in vast quantities and became the mainstay of fashion. In Mansfield Park, Edward Tilney declares – ‘a woman can never be too fine when she is all in white …’

The Regency silhouette defined a dress with a high, fitted bodice and a long, loosely falling skirt which lengthened and flattered the body shape but did not always make it look slim. Fabrics were light to the point of being sheer which made them easier to wash but also necessitated three layers of clothing. A shift made of linen or cotton was worn as an undergarment, it had short, straight sleeves and a wide rectangular or round neck to suit the gown being worn and often came with a detachable gathered muslin frill. A petticoat of linen, lawn or coloured silk prevented dresses from being fully transparent and highlighted the fine muslin which was often woven with delicate floral patterns. Short stays or petticoats with a fitted bodice might be needed to achieve the fashionable silhouette, other women resorted to long knitted undergarments of silk or cotton moulded to the body. They were without sleeves but pulled down over the legs forcing the wearer to take very short steps.

A short jacket called a spencer, which was cut on similar lines to the high waisted dress bodice and made of matching material or trim, could be worn for warmth at home in the daytime and especially when out walking. Jane Austen wrote in 1808 “my kerseymere spencer is quite the comfort of our walks”. A full or knee length, long sleeved, high waisted pelisse, or coat dress, made of wool or velvet in colder months and sarcenet or silks in the summer could also be worn when outdoors. Both spencer and pelisse being worn with a matching poke bonnet of fabric or straw decorated with ribbons or trimmings to match the outfit. Tall crowned hats shaped like a military shako were popular especially when worn with a riding habit trimmed with military style braid, a fashionable but also practical outfit which could be worn for travelling and walking or going to church when in the country. Walking sticks were a fashionable accessory often delicately decorated with ribbons or gilding, whilst a silk parasol would be carried on sunny days. Ankle boots were made from kid-leather or satin with many colours being available, though in wet conditions overshoes or pattens, resembling wooden-soled sandals with an iron ring fastened to the bottom, were necessary to raise dress hems above the mud. Gloves were commonly worn in all weathers and large fur or sealskin muffs were carried for extra warmth with swansdown being popular for evenings.

Inspired by the neoclassical, the style of the day was casual and informal; though there were still demarcations of Full, Half and Undress that ruled the propriety of fashion. Clothes were a major item of expense as contemporary expectations amongst the upper class and the aspiring wealthy middle class demanded the correct outfit for social occasions. Worn at home Undress referred to simpler dresses with long sleeves and a covered neckline made from white or printed cotton, cambric or muslin in dark shades worn with a beribboned fabric cap and apron and fine cotton stockings tied above the knee.

Jane Austen was very fond of caps and wore them from an early age, detailing the making and altering of others in her letters to Cassandra. Round gowns which had been popular since the 1790’s had skirts completely encircling the body. Made of lightweight wool or printed cotton they were seen as a practical alternative to muslin, especially when engaged in household tasks. Detachable pockets were still an essential item though often accessed through a slit in the petticoat rather than the gown.

Half dress, usually muslin, involved a smarter more formal ensemble with shorter sleeves and a lower neckline for receiving and making visits. It could also be worn for some evening entertainments and afternoon walks, particularly if visiting the fashion shops of Mayfair. Full Dress was the most formal with ornate gowns, usually with a train, made of silk or the finest Indian muslin which might glitter with gold and silver threads. Such dresses were also worn as wedding gowns whilst dresses for dancing were often of a lighter, more tubular style with a shorter hemline decorated with a Vandyke border of ivory silk; short, puffed sleeves being the standard for evening wear.

Formal outfits would be worn with silk stockings embroidered with decorative clocks at the ankle. Flat ballet style shoes in jewel coloured silk or satin, or sandals worn with an ankle bracelet and toe rings, were ideal for dancing whilst an elaborately embroidered shawl of cashmere or silk could be artfully draped over the figure. Long white gloves and a small decorated silk bag called a reticule would complete the outfit. With the popularity of the reticule fans had become smaller; paper and silk fans were highly decorated with scenes from the Grand Tour or neoclassical patterns, whilst ivory fans and dance cards remained popular.

In an age of consumerism women were spending larger amounts of money on their own account than previous generations, especially on fashionable goods and by 1810 English women’s attire echoed this with style and fit being as important as the type of fabric used. Although the Regency style continued to be popular into the next decade Romanticism and even a revival of Renaissance fashion led to styles moving from simplicity towards ornamentation. Mechanisation led to lower production costs and increased availability led to an abundance of decoration and trimmings, particularly silk bows, piping and cording, not only on dresses but on spencers and pelisses. Long stays, from bust to hip, returned though in a less exaggerated form and drawers or pantaloons, both calf and ankle length, became established items of a lady’s wardrobe. Full length sleeves were fashionable again and whilst waists were still high for evening wear waistlines dropped almost to the natural waist for daytime, skirts becoming bell shaped, gathered at the back, and shorter with decorative details around the hem.

English fashion in the period 1800 to 1820 became synonymous with affluence, respectability and prosperity for a wider segment of the population, no longer were the latest styles confined to London’s high society. As travel to London and the larger towns became easier and illustrated fashion such as Designs of Modern Costume (1812) became more available the aspiring and affluent middle class, as well as country society, were eager to have the latest fashions too. Fashion had become the barometer of change propelled by capitalism and industrialisation.