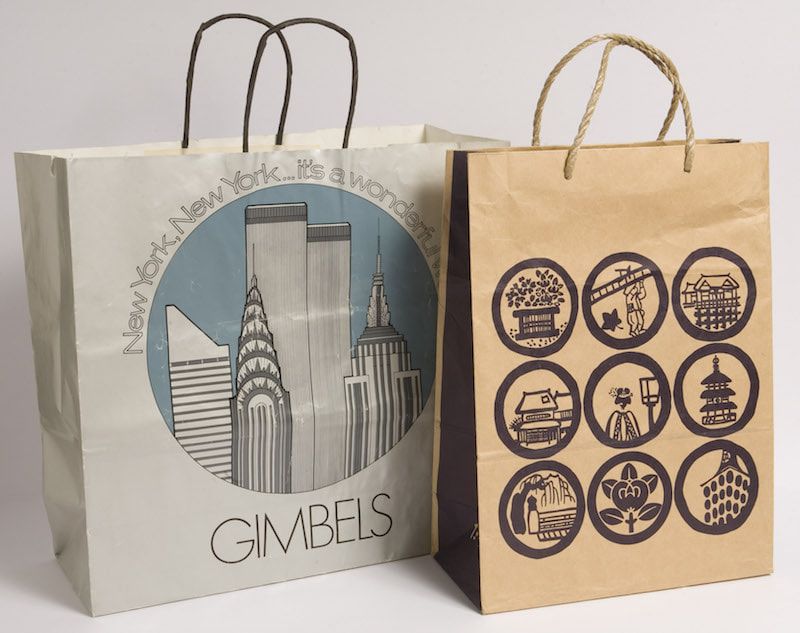 Recent controversies over the problems caused by the proliferation of ‘single use’ plastic bags has highlighted their increasingly pervasive presence throughout the world. Attempts to limit their use has even led to hoarding supplies. But what of their more attractive relatives, branded bags which are frequently conserved, even collected, rather than hoarded?

Surprisingly little attention has been paid to this class of ephemeral productions. In 1978 the Cooper Hewitt Museum, New York, mounted an exhibition of Bandboxes and Shopping Bags from their collection, classifying “11 categories of bag design” in the 125 examples. Richard Oliver, the Curator of Contemporary Architecture and Design summarised key aspects which are reiterated in the slim existing literature; the bag’s role as status symbol, portable advertisement and “kinetic sidewalk exhibition of graphic design.” A glance at the catalogue demonstrates vividly the dramatic changes in the aesthetic of design from the 1970’s to now.

A charming little picture book by Sue Weiner and Fran Michelman, Shopping Bag Secrets: the most irresistible bags from the world’s most unique stores (US 1999, UK 2003) gives a brief history of the bag. The first true carrier bag was patented in Germany in 1906. Automated production of bags, in formats still current, came in the 1930’s, but printing breakthroughs in the 1970’s considerably expanded design possibilities.

Packaging choices are, of course, a major part of branding strategies and certain firms have attained a remarkable degree of product identification based on their packaging with the bag as an integral part. Christian Dior early realised the benefits of a consistent corporate image; his use of houndstooth, the pattern of one of his “lucky” fabrics was borrowed by Australia’s department store David Jones and 60 years later is still with us. Tiffany and Co, which in fact adopted the particular “robin’s egg blue” relatively recently in its overall history, has heavily featured box and bag in its advertising campaigns. Ironically the almost equally well-known orange of Hermes stemmed from a WWII shortage of materials, leaving an orange card as one of the few available options.

The US firm Modern Arts Packaging, founded in 1967, has produced bags for many major luxury goods firms, including Yves Saint Laurent, Chanel, Dior, Gucci, Vuitton and Harry Winston as well as for department stores and museums. What they call “Euro Tote Luxury Shopping Bags” are “the finest shopping bag available” which “add status and will be carried and reused over and over again.” Indeed, the widespread acknowledgement of the bag as a signifier of luxury consumption has led to the production of fake bags for those who cannot afford the original contents.

Although they come in a remarkable range of sizes, shapes, surface treatments and handles an examination of the bags used by luxury fashion firms reveals an overwhelming preponderance of heavyweight, usually laminated, gusseted bags, often with relatively discreet logos and “soft rope” handles, the most expensive of which are a multi-stranded 8 cm cord.

In a deliberate attempt to set themselves apart, from 1979 Bloomingdales commissioned architects, artists and designers including Michael Graves, Antonio Lopez and Ettore Sottsass to produce logo-less limited-edition designs – 4 or 5 annually. John C Jay, Creative Director from 1979-1993, commented in 2006 “We wanted to build a brand by constant surprise and creative risk – something that’s missing from retail today.”

John Brunkowski’s 2016 Gift and Shopping Bag Design enthusiastically claims “The artwork displayed on gift and shopping bags has never been more exciting!” Significantly, while shopping bags have attracted little scholarly attention, many artists including Andy Warhol, Sylvie Fleury, Yuken Teruya, and, in Australia, Jan Murray, have been drawn to their complex meanings in contemporary life.

For institutions, conserving such ephemera provides an archive documenting the histories of commercial entities and changing technologies. In an article for Smithsonian Magazine in 2006 Owen Edwards commented “On eBay recently, I came across a green shopping bag stamped with the gold logo of Marshall Field’s in Chicago, now a Macy’s. The description under the item said simply: ‘The store is history.’

For individuals, these perishable packings represent a souvenir, evocative of times and places linked to their sense of self, a fragile but persistent memorial of emotion.