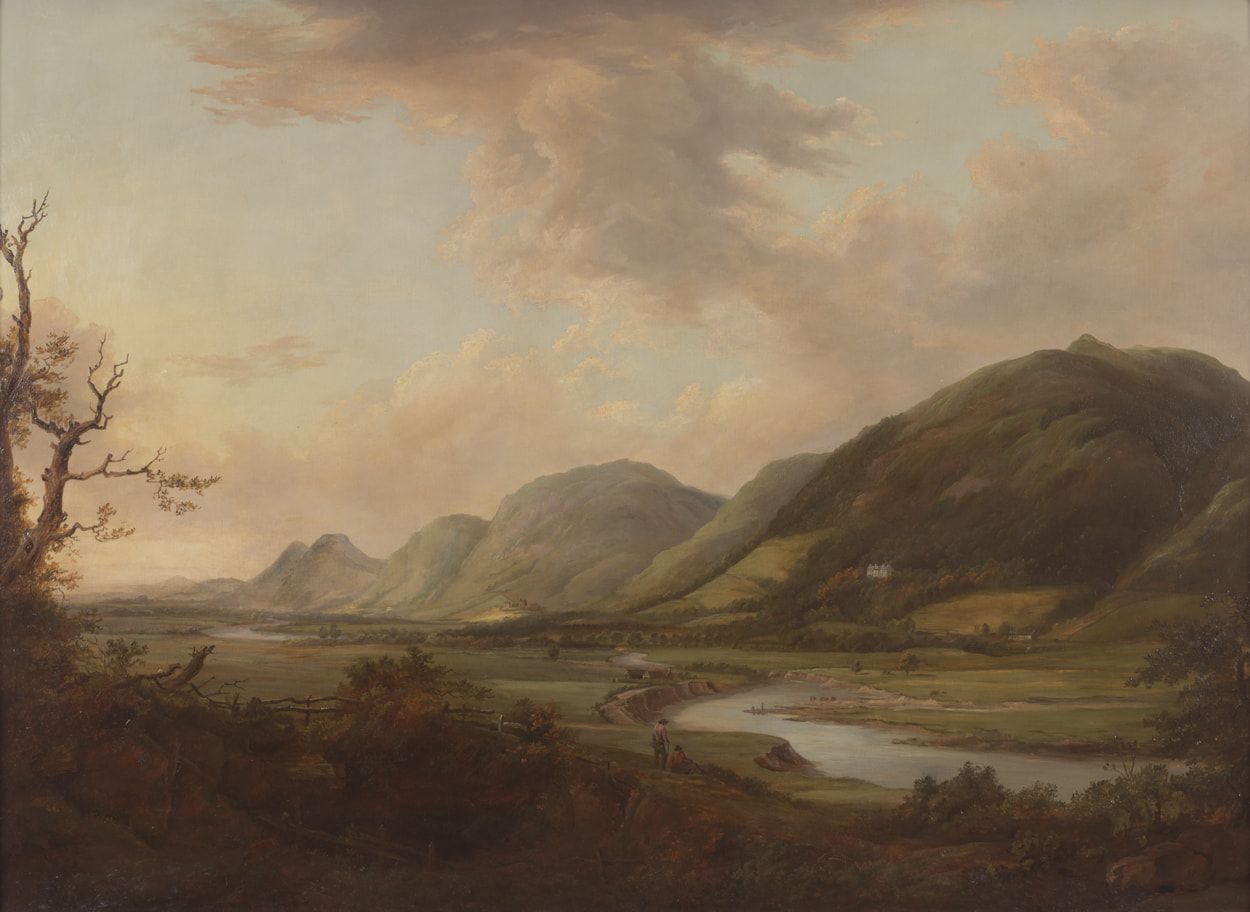 Alva is a village in Stirlingshire, situated at the foot of Craigleith, one of the Ochil Range, seven miles (11 km) north-east of Stirling in Scotland.

The painting of Alva House, Stirlingshire, The Seat of J. R. Johnstone Esq. was purchased and kept by William Johnston. Although no relation, the suggestion has been put that William was probably trying to reinvent himself by associating himself with the painting, though the purchase is also consistent with his interest in paintings and furniture of the period. Grandfather Johnston, who lived next door to William’s family in Lilydale, was Scottish and Anglican, and much of his fine old furniture and artefacts came with his family from Britain in the 1850s, influencing William’s own love of Georgian and Regency furniture.

Alexander Nasmyth (1758-1840) was known as an architect and a portrait artist. He was also styled the ‘father of Scottish landscape art’. His landscapes are carefully finished and coloured, influenced to a degree by Claude Lorrain and the Dutch landscapists. However, the word erased in front of ‘NASMITH’ in the painting is probably ‘after,’ confusing the attribution which could have been made to two sons and six daughters, most of whom were artists.

Alva House was built in 1636, incorporating an existing residence on the land, and was once home to the Erskine family. Lord Alva sold it to John R Johnstone Esq in 1775, it was then rebuilt as a mansion by Robert Adam in 1789 and then further extended in 1820. When the last of the Johnstones died in the 1920s, no new buyer could be found.

John Johnstone (1734-95), was the fifth son of the third baronet, Sir James Johnstone of Westerhall. Born and educated in Edinburgh, at 16 years of age he was appointed as a writer serving in the East India Company, working in Bengal and later Dacca. Here he was made a prisoner in 1756 - and then released - in the fighting between the Company and the Nawab of Bengal. His brother died in the Black Hole of Calcutta. He returned with Sir Robert Clive to retake Calcutta, served at the battle of Plassey and took part in an expedition against the French.

Further Company appointments at Midnapore, Burdwan and on the Bengal Council gave him opportunities for dubious activities such as private trading ventures and revenue farming, and to accept gifts from the Raja of Burdwan. As a result, in 1764 he was dismissed from the Company. His reinstatement only months later caused a rift with Clive and his followers. In 1765 Clive arrived as Governor of Bengal and began an inquiry into the further presents received by Johnstone, who then resigned and returned to England with about £300,000, then a great fortune.

With this wealth he bought Alva House and, despite his dubious activities in India, stood for Parliament, eventually succeeding in 1774 but losing his seat in 1780. Interestingly, although immensely rich, Johnstone was not popular.