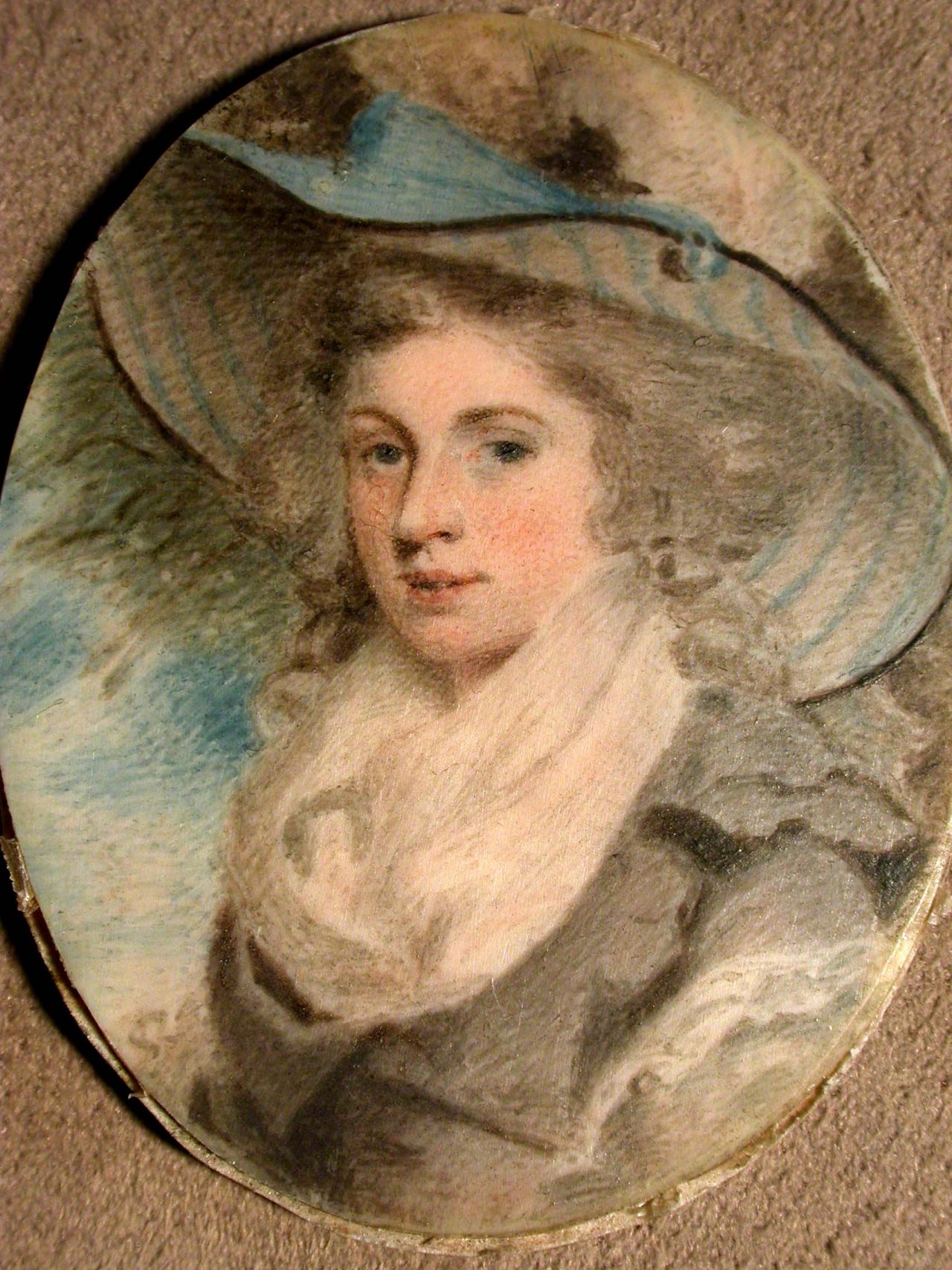 1760 – 1800 In the period 1760 to 1780 a new wealthy merchant class emerged for whom fashion was an important part of their lives, vast amounts of money were spent on conspicuous displays as a hopeful entrée into society.

Fashions were also influenced by travellers returning from the Grand Tour with clothes and fashion plates from Paris, though English costume remained less extravagant than its Parisian counterpart with a greater informality at home or out of doors. Women’s clothes were generally tight against the torso from the natural waist up and heavily full- skirted below; the mantua, popular in the first half of the century and worn over wide panniers made of woven linen and cane, had become stylised into the sack back gown. This was still worn over hoops with various kinds of underskirts, beneath which was worn a shift, stays (ribbed with whalebone and laced to give a straight waist) and hose of wool or silk gartered at the knee.

The robe a la francais was open at the front requiring a stomacher, a V shaped panel laced into place made of matching or contrasting fabric and elaborately embroidered or adorned with lace and ribbons. In later styles the stomacher was replaced by a bodice with edges that met at the front. In an alternative style the robe was closed - being fitted at the back with fabric falling from the shoulders. Another popular fashion was the robe a l’anglaise a close bodied gown featuring back pleats released into the skirt, which could be draped in various ways. In the portrait opposite the sitter is wearing a sack back robe possibly of Spitalfields silk, with a design by Anna Maria Garthwaite.

By the 1780s dress became less of a way to solely categorise between classes or genders, as alongside the growing fondness for the outdoors, elaborate female fashions gave way to more naturalistic styles, though they still took up a considerable amount of space with padded busts and bottoms and elaborate hats. The low decollete was covered by a white fichu or neckerchief usually of muslin, whilst sleeves covered the arms to the wrist and a sash was tied around the waist giving an illusion of a raised waistline. A mob cap of lace or linen was worn indoors and a large wide-brimmed straw hat completed the outfit for strolls in the countryside. On cool days a full length enveloping lightweight wool dress with buttons down to the hem known as a redingote, was worn, whilst riding habits were influenced by male tailored waistcoats and jackets. Panniers and heavily boned corsets were only worn with silk formal gowns and with mantuas decorated with gold and silver thread worn at court where Queen Charlotte insisted on formality. However, it was Marie Antoinette who later in the decade, had the greatest influence on fashion when she wore a more informal style of dress when not attending court functions; the gaulle or chemise a la reine consisted of thin layers of muslin, cotton or sheer linen loosely draped around the body gathered around the neck, belted at the waist and often worn with an apron and a fichu to cover the décolletage.

Fashionable women in England also adopted this casual style of dressing though it tended to be worn in the home, as were front wrapping thigh length bedgowns made of lightweight printed cotton fabrics worn with petticoats and handkerchiefs of fine, sheer fabrics usually trimmed with embroidery or lace. The cotton petticoat, often in a contrasting colour, was a dress worn beneath a robe or open gown rather than underwear - it provided an extra layer of warmth and the richer fabric of the outer dress could be lifted when walking without the ankle being exposed. Stockings were tied above the knees with ribbons and were made of fine wool or cotton for daytime wear and knitted silk for evening. Free hanging pockets were tied around the waist and were accessed through pocket slits in the gown or petticoat whilst wool or quilted waistcoats were worn over the stays and under the gown for warmth in winter. At home backless slippers were worn whilst outdoors shoes were very elegant with short, slender heels and pointed toes that were made of satin, leather or painted kid, fastened with ribbons or small buckles and with no right or left design.

During the 1790’s there was a new emphasis on hygiene; clothing became lighter so able to be changed and washed more frequently. Spotted and plain muslins were popular for chemises which had a drawstring to tighten at the neckline which would also have a small frill, drawing attention to the bust. The ease and comfort of one’s dress was incorporated into a more natural style, tightly laced stays and heavy fabrics began to give way to a celebration of the natural form though many women still relied on short, lightly boned corsets to highlight their fashionable style. Gowns with opening fronts requiring a matching petticoat were still worn but round gowns, which had straight skirts pleated at the back that no longer opened at the front and a closed bodice requiring no stomacher, had become fashionable for day wear. Usually made from printed cotton fabric, brown or deep purple muslin with Vandyke (pointed borders) was also recommended - though Jane Austen ordered a ‘plain brown cambric muslin’, which was worn with a muslin handkerchief or fichu tucked into the neck of the dress.

Day dresses had higher necklines and longer, tighter sleeves than evening wear when ‘open gowns’ with short sleeves, long trains and matching petticoats would be worn, whilst white was the colour worn by the gentry for receiving and making visits. For outdoors redingotes had become a fashion statement in themselves, double breasted they were closely fitted to the waist with a cutaway front and collar and cuffs in contrasting colours, a wool or fur muff being a necessary addition. Riding habits, made of dark coloured wool fabric with a silk ‘habit shirt’ worn underneath the waistcoat were an essential fashion item and even worn to church or as a ‘going away outfit’. A hat with a veil to protect the complexion completed the outfit. Shawls were in vogue as were long fur tippets and fashionable oriental style silk turbans inspired by Nelson’s Nile Campaign. New fashions required natural coloured hair, dressed simply in a mass of curls swept up on the top of the head and often decorated with large ostrich feathers. Following the introduction of a tax on powder in 1795 hair powder was only used when attending court functions. Shoes were becoming more comfortable with simple styles providing greater freedom of movement due to broad, flat or wedge-shaped heels, with leather walking shoes and short boots for outdoors. Fashionable gloves were made of white kid which either had all over prints or pretty hand painted designs, glove strings made of ribbon were tied or fastened with a jewelled buckle high above the elbow.

The 18th century was a time of great change and importance for women’s fashions and by its end the clothes women wore had become comfortable and soft flowing with similar styles being seen across all classes of society. Fine fabrics of cotton, wool and silk and increasingly muslin gave women the delicate, feminine figure that became popular and admired. Although skirts were still full, waistlines were rising preparing the way for the neo classic inspired Empire and Regency fashions of the early 19th century.