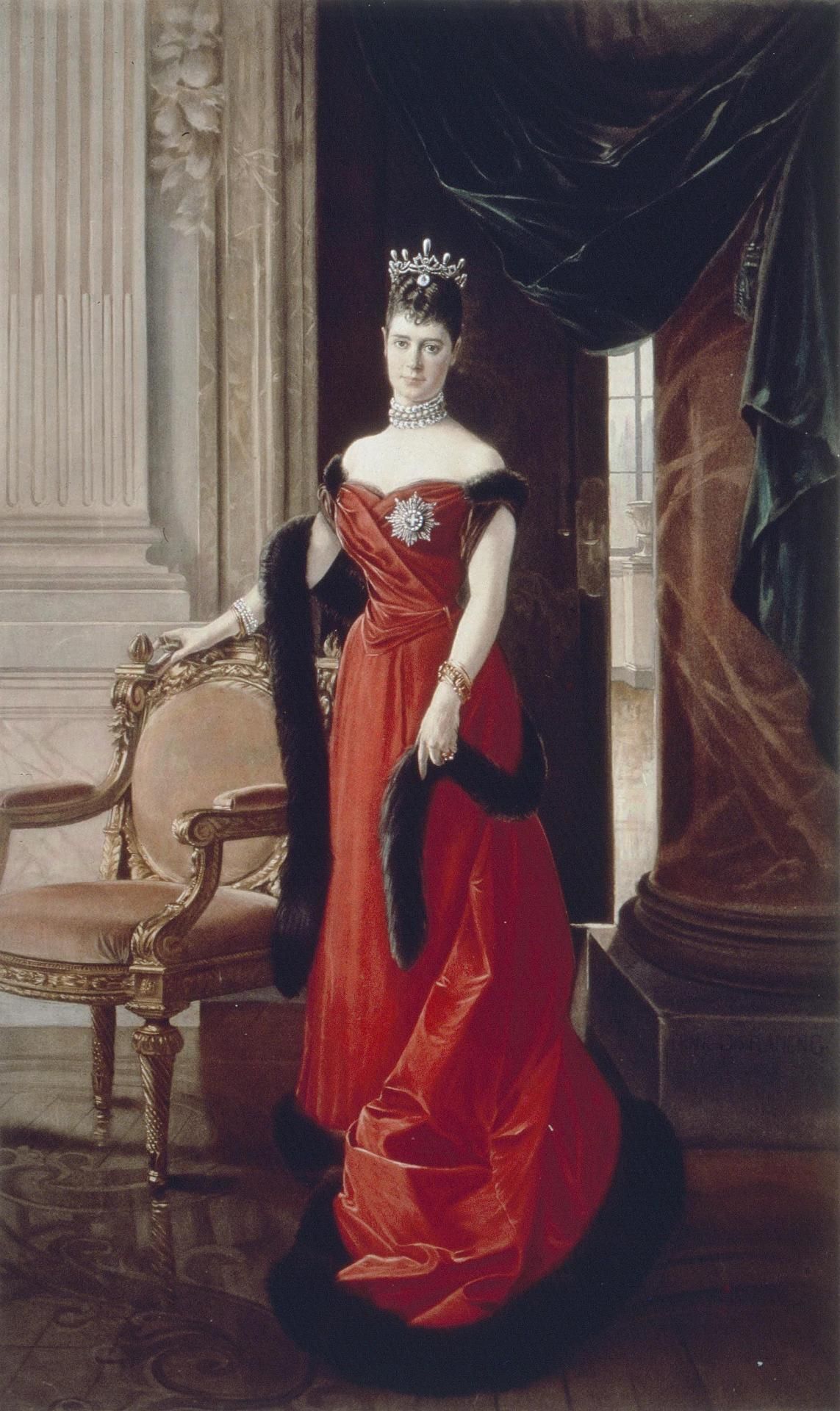 While François Flameng is no longer a household name, in the last quarter of the 19th century, he was considered among the most popular genre painters and sought-after elite portrait specialists in Europe. Among his most illustrious patrons was Alexander III, Emperor of Russia (1845-1894), who acquired a number of Flameng’s works for the Russian imperial collection. In the early 1890s, the Emperor invited the artist to St Petersburg with the offer of lucrative portrait commissions from the Russian Imperial family and the aristocratic elites.

The portrait of the Emperor’s wife, Empress Maria Feodorovna (1894), was undoubtedly among the most important commissions undertaken by the artist during his trip to Russia. He painted the Empress standing, full-length, in a slight turn to the left and facing the viewer with a kind and benevolent gaze. Her regal status is emphasised by such traditional trappings of royal portraiture as the gilded chair, patterned flooring, imposing column, and a floating curtain. The iconographical lineage of these objects can be traced back to early Christian and Greco-Roman representations of saints and deities. They imbue the sitter with a semi-divine status and emphasise the monarchs’ divine dispensation to rule. It was traditional to place monarchs on a raised platform to illustrate their symbolic elevation above their subjects. In this portrait, however, no barrier separates the Empress from the viewers. Such departure from tradition may have been intentional and may illustrate that among the most important functions of the Empress was the leadership of the Empire’s charitable and philanthropic endeavours. The portrait implies the accessibility and close connection between the Empress and her subjects and her role as the willing intercessor on behalf of the masses with her powerful and formidable husband.

The focal point of the portrait is the Empress’s evening gown of garnet-coloured velvet with sable trimmings. The striking silhouette of the tightly corseted waist and cascading train illustrates the Empress’s reputation as the acknowledged trend-setter and leader of fashionable society. The design of the dress is unmistakeably French and refers to the fact that France was considered among the Russian elites as the epitome of taste and style. The choice of the garnet-coloured garment with sable accents may have been chosen by the artist intentionally to link the portrait visually with the acknowledged champions of fashion and elegance from the preceding eras, Queen Marie-Antoinette and Empress Eugénie, who appear in gowns of similar colour and design in their celebrated portraits respectively by Elisabeth Louise Vigee-Lebrun (1755-1842; 1787, oil on canvas, Versailles: Musée National du Château) and Franz Xaver Winterhalter (1805-1873; 1857, oil on canvas, Compiègne: Musée National du Château).

Flameng’s portrait can be read as a fitting apotheosis to the woman, who, strictly speaking, was not born in the purple, but who, due to circumstances beyond her control, was raised to the very apex of the social pyramid and performed her role with confidence, elegance, and aplomb. Born Princess Dagmar of Schleswig-Hosltein-Sondernburg-Glücksburg, she was plucked (together with her parents and siblings) from a relatively impoverished German princely family and elevated to royalty as members of the Danish ruling dynasty. By the early 20th century, her eldest brother succeeded as King Frederick VIII of Denmark (1843-1912); her younger brother was elected to the throne of Greece as King George I (1845-1913); her younger sister Thyra became - de-jure Queen of Hanover (1853-1933); and, most famously, her eldest sister, Alexandra, in 1901, became Queen of Great Britain (as consort of King Edward VII (1841-1910)).

Of all the siblings, Alexandra and Maria were the closest. Whether living in modest grace-and-favour residences in Denmark, or, after their respective marriages, occupying the most glittering of the palaces on the opposite sides of Europe, the two sisters kept up voluminous correspondence, did their utmost to catch up annually in their native Denmark, and most, famously, imitated each other’s styles, dressing at times in identical gowns to confuse family and strangers alike.

It is therefore not surprising that François Flameng was eventually beckoned to London with the commission to paint the Empress’s sister, Queen Alexandra (1908). For this particular representation, Flameng opted for an outdoor setting, where the regal status of the sitter is conveyed through the landscape vista and the looming silhouette of Windsor Castle in the background. The Queen reposes upon a marble terrace, which elevates her emphatically a step above her viewing public. The small diamond coronet with the stylised rose, shamrock and thistle, emblematic of England, Scotland, and Ireland, and the prominent brooch with the fabled Koh-i-Noor diamond from India symbolise collectively the authority of the British Crown over the British Isles and its dominions ‘beyond the seas’.

Alexandra’s regal status is further underscored by the unmistakable insignia of the Order of the Garter—including the blue ribbon across her bodice, the badge on the upper right and the star just above the hip (the actual Order, consisting of diamonds on a band of blue velvet, is visible under the shawl on the upper left arm). Alexandra became not only the first female consort, but also the first (non-regnant) woman to receive the Garter. It appears to have been truly admirable of Edward VII to change the rules of the Order to make his wife its first female recipient.

Another prominent piece of jewellery is the elaborate, multi-strand, tightly fitting necklace, chiefly of diamonds, which encircles the Queen’s throat; Alexandra sustained some scarring on her neck following a childhood illness. Initially, she contrived to hide the scars under tightly-curled ringlets of hair which cascaded down her shoulders. With the change in fashion, Alexandra hid the scars under tightly-fitting velvet ribbons, strings of pearls, and diamond necklets. Given her acknowledged trend-setting reputation, these elaborate necklaces were soon adopted by the fashionable set and had remained an indispensable item of high-society jewellery well into the first half of the 20th century.

As one of the Queen’s traditional roles was to act as the foremost ambassador for British fabric makers and lace weavers, it can be also assumed that the cascading satins and floating gauzes are of British manufacture. However, the elongated silhouette of the tightly-corseted evening gown echoes the French gowns of her sister, Empress Maria of Russia. Flameng may have unwittingly alluded to the rumour that the Queen ordered her dresses from the leading Parisian couturiers, and had them brought to England in secret, where they were unpicked and recreated meticulously in British fabrics.

François Flameng appears to have carried out the portrait of Queen Alexandra with a greater artistic freedom. The effervescent brushwork, looser pigment application, and realistic atmospheric effects illustrate clearly the artist’s awareness of contemporary art movements and his willingness to introduce them within the realm of official royal portraiture. The comparison between Flameng’s portraits of Empress Maria and Queen Alexandra demonstrates the continuous stylistic evolution of the genre. By hiring the most popular and accomplished portrait specialists of the era, royal families not only provided their publics with the sophisticated and officially-sanctioned image but also demonstrated their enduring relevance to - and acute awareness of - contemporary society. This trend has been reflected amply by the embrace of photography and moving image from the middle of the 20th century onwards by the members of the present-day royal families.

This article was originally published in fairhall, issue 25, September 2018, pp 8-9.