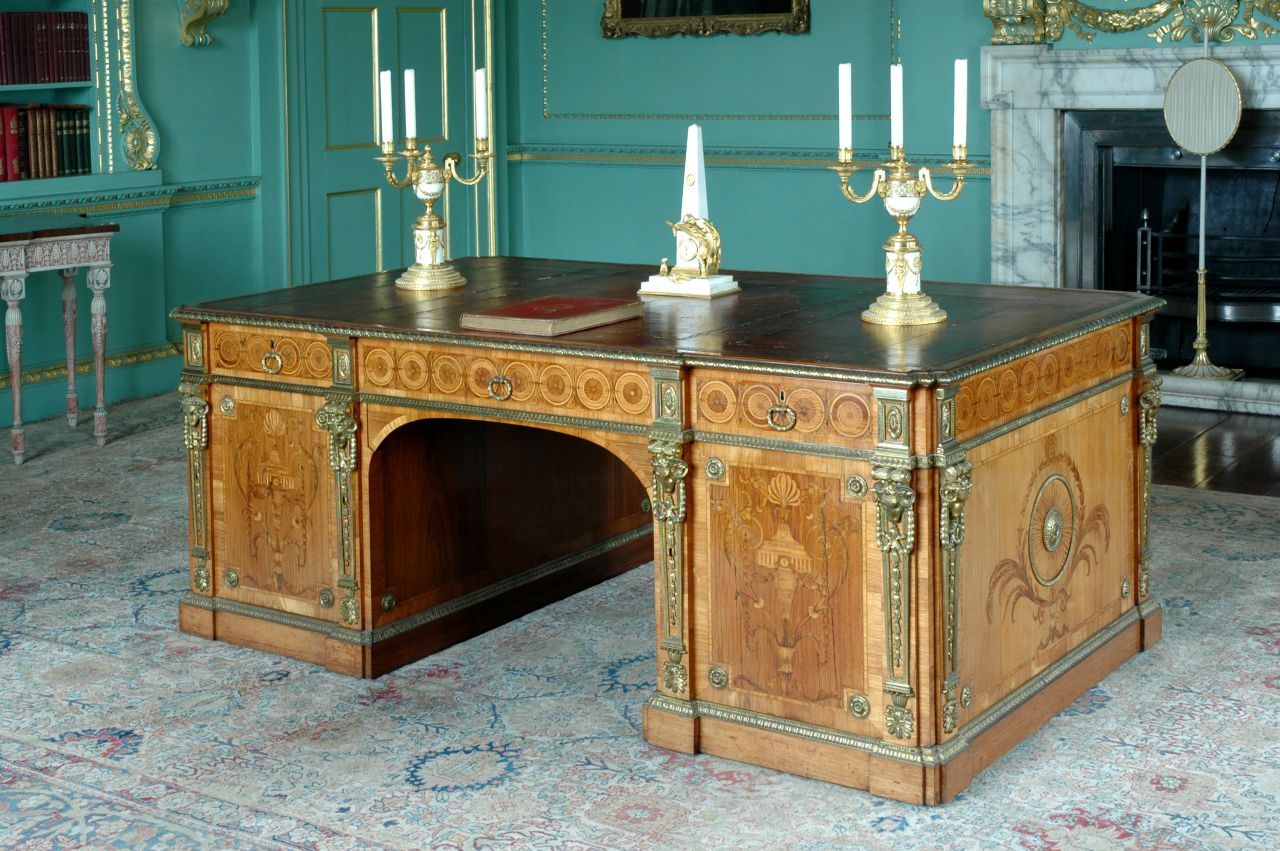 The year 2018 was the 300th anniversary of the birth of renowned English furniture maker and designer Thomas Chippendale (1718-1779).

“The name ‘Chippendale’ has always carried a certain mystique for me.” As an enthusiast of 18th century culture, and the daughter of a fine-furniture maker, this revelation is not unexpected. More surprisingly, the legacy of the Yorkshire-born cabinetmaker and designer Thomas Chippendale (1718- 1779) - celebrated as ‘the Shakespeare of British furniture’ - continues to have allure, even for non-specialist audiences. In comparison, the individuals connected with other prestigious 18th century English cabinetmaking firms - John Mayhew and William Ince, John Linnell, William Vile, and John Cobb - are likely to be recognised only by furniture cognoscenti. Why is ‘Chippendale’ still a household name, three hundred years after his birth? Some of the reasons for the ongoing intrigue (and mythology) that surrounds the firm of Thomas Chippendale, were revealed in the special events, exhibitions and symposia that marked the Chippendale tercentenary celebrations in the United Kingdom. I was fortunate to be part of the festivities.

Yorkshire, appropriately, was the heart of Chippendale 300. Thomas Chippendale was baptised at Otley, a village only twenty kilometres from Leeds, on 5 June 1718. Information is sketchy about his early workshop training in the area, likely undertaken with Richard Wood (fl. 1726-72) in York. The North of England continued to be an important source of patronage for Chippendale’s work, even after his relocation to London premises in the mid-1700s. Yorkshire still boasts the greatest concentration of residences containing documented furniture by Thomas Chippendale and Thomas Chippendale Junior (1749- 1822), and these now form part of The Yorkshire Chippendale Trail. The trail features Nostell Priory, Harewood House, Temple Newsam House, Burton Constable - and the lesser-known Bolling Hall, Cannon Hall Museum, Aske Hall, and Newby Hall (which contains one of the largest and most complete collections of Chippendale furniture in private ownership). Several of these properties offer the unique experience of viewing furniture in the settings for which it was commissioned, and some are also linked with other ‘rock-star’ 18th century interior and garden designers such as Robert Adam (1728- 1792) and Lancelot ‘Capability’ Brown (1716-1783).

The flagship event for the Chippendale 300 festivities was the exhibition, Thomas Chippendale: A celebration of British craftsmanship and design 1718-79, held at the Leeds City Museum in conjunction with the Chippendale Society. The exhibition featured the four fashionable styles in which Chippendale worked: Rococo (known as ‘Modern’, ‘French’, or ‘Contrast’), Chinese (‘Chinoiserie’), Gothic, and Neo-Classical (or ‘Antique’). Exquisite objects - many from private collections - were juxtaposed to demonstrate the nuances of each style. The intimate exhibition spaces of the Leeds City Museum provided a rare opportunity for the close study and comparison of the fine details of these pieces, all of exceptional quality and some with their original upholstery. Workshop practices, finances, dealing with demanding customers, and the business of 18th century cabinetmaking were explored through invoices, letters, and other documents, many sourced from the extensive collection of the Chippendale Society (now housed at Temple Newsam House).

An exhibition highlight was a table which originally formed part of Robert Adam’s neo-classical ‘Circular Room’ at Harewood House, Yorkshire, the location of one of the Chippendale workshop’s most lavish commissions. The room was destroyed during a later restoration, but Adam’s coloured drawings for the space survive in Sir John Soane’s Museum, London. The table had been specially restored for the Leeds exhibition, and after the removal of layers of paint, revealed vivid marquetry in white, blue and pink, which closely aligned with one of Adam’s drawings for the room. The table and its interpretative information highlighted the close links between interior schemes and fashionable furniture design in the 18th century, and also vigorously demonstrated that much of what we now know as ‘brown furniture’, originally featured light and bright tones. A recreation of the table’s original natural and dyed veneers showed the colours used were predominantly pale grey, pale green, rose-pink, and bright lemon-yellow: a surprising palette for twenty-first century eyes.

The exhibition also contrasted old and new, Chippendale and ‘after Chippendale’, to elucidate how Chippendale’s legacy has become entwined with British and American twentieth century popular culture. Displayed objects included the score of the 1918 American parlour tune, ‘Chintz and Chippendale’; US Mail postage stamps of the ubiquitous ‘ribband back’ chair; architect Robert Venturi and Denise Scott Brown’s plywood ‘Chippendale Chair with Grandmother Pattern’ (manufactured by Knoll International in 1983-4); and Disney’s 1943 ‘Chip n’ Dale’ chipmunk cartoons. The exhibition guidebook also noted that the 1997 comedy film The Full Monty - featuring a group of unemployed Yorkshire miners who turn to striptease to raise cash - was inspired by the all-male American exotic dance group, ‘The Chippendales’. The latter was founded in Los Angeles in the late 1970s by the owners of the Destiny II nightclub, and the group was named after the Chippendale[1]style furniture prominent at the club. Certainly, an unexpected cultural connection!

Changing impressions and interpretations of Chippendale’s work - across borders and through the centuries - were also key themes of the Annual Symposium of the Furniture History Society (FHS), held in Leeds in April 2018 in partnership with the Chippendale Society. As an international member of the FHS, I was fortunate to access early-bird tickets – a privilege that was only fully appreciated when I discovered tickets to the symposium had sold out in the first morning of their public release. The symposium featured a who’s who of international scholars, and represented new cross-disciplinary Chippendale research from experts in furniture history, architecture, interior design, furniture manufacturing, textiles, historic houses, history of the antiques trade, and bibliography. It is difficult to adequately summarise the diversity of the richly illustrated presentations, and there is space to feature only one speaker below. The FHS has recently published the symposium papers in the society journal, Furniture History and I recommend this volume to everyone with even a passing interest in Chippendale and 18th century culture.

A memorable symposium paper highlighted how changes in taste have influenced the appreciation of Chippendale’s designs over the centuries. Ann Sumner, Historic Collections Advisor at the Harewood House Trust, explained how the work of Chippendale was perceived by 18th century country house visitors. Surviving records of works at Harewood describe the variety of Chippendale’s activities there: from the provision of furniture, mirrors and ornaments (including the writing table now displayed at Temple Newsam House); the supply of mattresses; and the installation of wall-hangings and curtains. The Chippendale firm is now most often associated with chairs, desks and cabinets. But it was the lavish gilded pier glasses, overmantles, bedsteads, girandoles, and luxurious upholstery - as well as the magnificent sums spent - that captured the imaginations of 18th century visitors. The fine Chippendale cabinet-work that is now much admired by visitors to Harewood, was hardly mentioned by 18th century diarists and letter-writers.

Ironically, it was a book, rather than furniture, that initially ‘made’ Chippendale, and secured his international reputation. In 1754, he published the first edition of The Gentleman and Cabinet-Maker’s Director, an innovative volume of engraved plates of ‘the most Elegant and Useful Designs for Household Furniture’. The brand recognition that resulted, ensured Chippendale’s ongoing fame. The Metropolitan Museum of Art, New York, houses the original drawings for the Director, and the 2018 exhibition, Chippendale’s Director: The Designs and Legacy of a Furniture Maker, explored the volume’s impact on 18th century furniture making in the US. My visit to this exhibition will be described in Part II of this series on the Chippendale tercentenary celebrations.