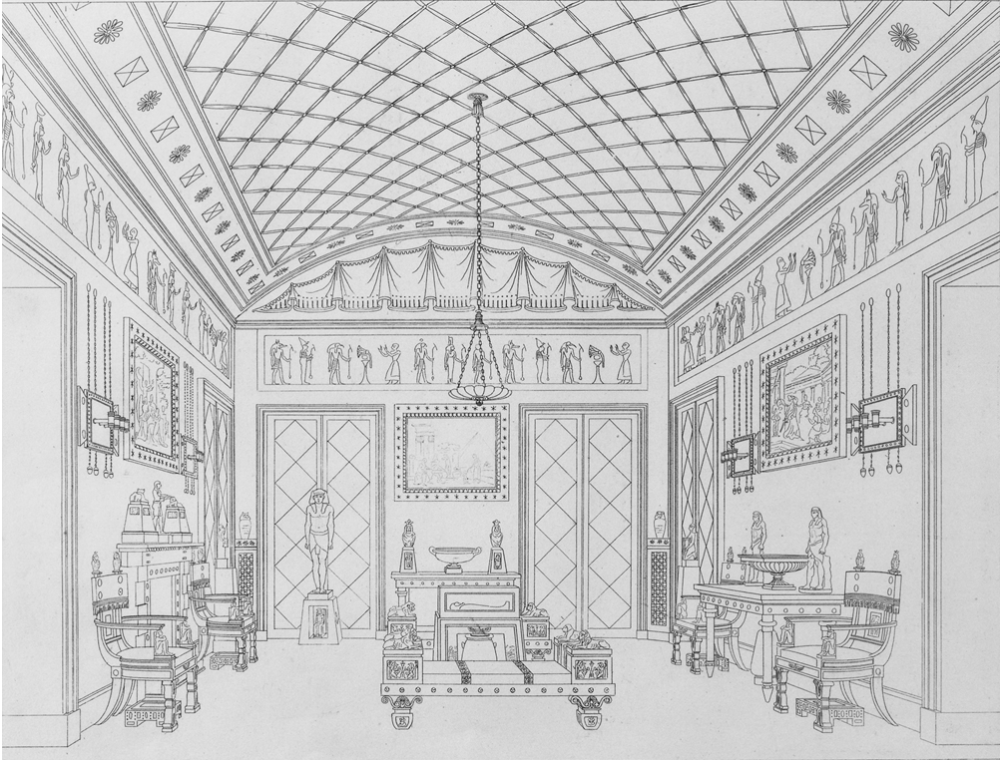 The English Regency Style describes the style and taste in architecture, costume, decoration, furniture and design and refers to the period when George, Prince of Wales, was Regent of England from 1811 until 1820, as well as his reign as King George IV until 1830.

It is generally regarded as the concluding phase of Georgian style and evolved from neoclassicism. The major source of inspiration for early Regency taste was found in Greek and Roman archaeological discoveries, but was influenced later by the taste for ancient Egyptian motifs and ornamentation, following Napoleon’s expedition to Egypt in 1798, and the volumes of Description de L’Egypte.

Amongst prominent architects of Regency classical buildings were Sir John Soane (1753-1837) and Henry Holland (1745-1806). One of the most fanciful and whimsical buildings was the Brighton Pavilion, created by John Nash (1752-1835) between 1815 and 1822, with its combination of Moorish, Indian and Chinese designs.

There was a richness and opulence associated with this style, compared to the neoclassical style. It may have been due to a decline in taste amongst the new class of industrialists and merchants, who were now the chief patrons of the arts and partly due to the expression of exuberance felt after the triumph of the Napoleonic wars.

Innovative features associated with the Regency style include a type of central heating, open planning with arches as doorways and full room patterned carpets. Windows were large, to admit the maximum amount of light and air, which showed the garden to advantage. The use of indoor plants was popular too. Large windows meant a possibility of draughts, so voluminous silk window draperies could be held back with golden cord and heavy tassels during the day.

Thomas Hope (1769-1831), the designer, in his publication of Household Furniture and Interior Decoration, 1807, encouraged an interest in classical interiors with some Asian influence. Walls were painted in vivid tones such as green, saffron, cherry, turquoise or salmon pink. An alternative was using French or English patterned wallpaper containing Chinoiserie or Pompeiian motifs.

Regency furniture was symmetrical, combining straight lines with modulated curves. Furniture was easily able to be moved around the room if needed, rather than remaining against a wall. Decoration generally began simply, however Hope’s designs were unrestrained using animal heads and paws, caryatids or sphinx-like supports. A distinctive Regency invention was the sofa table, with falling end flaps and used for writing, needlework, games and dining. By 1812 these tables had a single central turned pedestal support, with small claws as its feet. The Grecian form sofa chair with head and footrest similar to the French chaise longue, became popular for day time reclining.

The English naval victories influenced the style, by introducing brass as inlay on exotic woods, amongst which included rosewood, zebrawood or satinwood. Trafalgar chairs had sabre like legs or twisted cable mouldings which reminded one of rope from military ships.