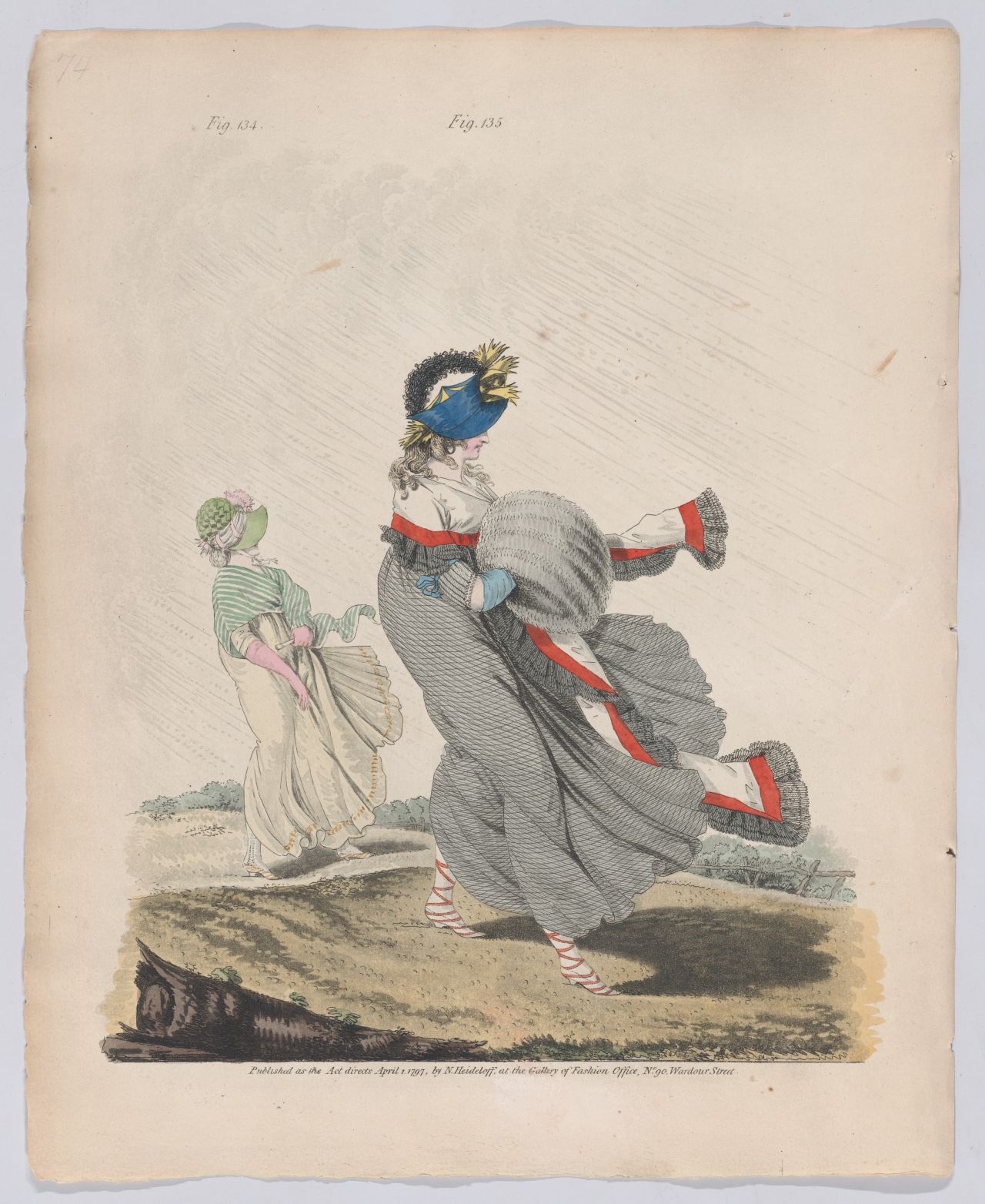 In 1827 the Italian poet Giacomo Leopardi (1798–1837) claimed that fashion was Death’s sister – ‘‘crippling people with tight shoes, cutting off their breath … because of their tight corsets” but he could have added the fatal use of cosmetics.

Despite an Act of 1724 regulating all preparations sold by apothecaries in London, including highly toxic ingredients such as lead, mercury and arsenic, the importance of wearing cosmetics which contained these products proved stronger. In an age of smallpox and disfiguring diseases a good complexion was highly prized. “the skin in general should be white, properly tinged with red, with an apparent softness and look of thriving health” (Joseph Spence 1752). Though an excess of red was equally unacceptable being associated with the coarse complexions of the lower classes and over–rouged prostitutes.

The second half of the 18th century was a time of artificiality and excessive use of perfume and cosmetics with most preparations made and applied in the home, from asses’ milk to make a woman ‘look as if she were but fifteen years old ‘ or bean–flower water to remove spots. Whilst these may have been harmless Eliza Smith’s recipe for pimple cream included brimstone, and a fingernail preparation contained arsenic. Face painting was practised mainly by women but also by men and children as it covered layers of dirt as well as scars; washing the whole body was still considered unhealthy, exposing one to the dangers of a chill in winter and sunburn in summer The wiping of face, neck and hands with a cold, wet cloth and homemade soap was seen as adequate by many, whilst a little toilet water made from lemons, lavender, jasmine or roses, applied to the hands and face was a common alternative. For the wealthy fine soaps could be imported from France or Italy but it was not until 1789 that Andrew Pears (1766–1845) started manufacturing a fine transparent soap in London. Overpowering body odours and sweat stained clothes meant that perfume was used more for hiding smells than creating a good impression.

To achieve a smooth and pleasant complexion took time and skill, starting with beeswax or lard to soften the skin which was then whitened with ceruse, a lead based foundation applied with a fine camel hair brush, to achieve the desired pale complexion. More harmless ingredients could be used for the foundation – including rice powder, vinegar, hartshorn, gum arabic and bismuth subnitrate – but lead based was the most popular as it had an opaque quality. Despite knowledge of the dangers, which included severe headaches, inflamed eyes, blackening of the skin, baldness and blood poisoning, vanity triumphed over health leading to the death of a number of young women including Maria Countess of Coventry at the age of 27 in 1760. An impregnated pad of hair known as Spanish wool saturated with white lead and chalk was used to apply face powder, or to ensure a glazed effect a layer of egg white could be applied over the decorated skin. Rouge was then applied, harmless mixtures could be made from sandalwood, safflowers, red wine or carmine derived from the cochineal insect as few cosmetics could be bought. However, the most popular rouges were vermillion made from mineral cinnabar and mercury sulphide resulting in loosening teeth and stinking breath. Fashionable lips were small and rosebud shaped, painted red to create a “bee sting effect”. A recipe for lip salve contained butter, beeswax and claret and alkanet (the root of which produces a red dye.) Once the lady had the desired complexion, she might need to avoid sitting too close to a fire in case her face melted and spoilt her evening.

Next the eyebrows, which needed to have a thin, halfmoon shape with tapered ends, darkened with lead, kohl, burnt cork, elderberry juice or soot. Excessive plucking could lead to loss of the eyebrows which could be replaced with false ones made of mouse skin. Finally, beauty patches were added which not only covered up smallpox scars but contrasted with the white skin. Made of velvet or black taffeta they came in many shapes – circles, diamonds, stars, birds, and hearts – evolving into a language of romance. A patch to the corner of the eye indicated that the lady was passionate, near the mouth flirtatious, right cheek – married. Replacements were kept in patch boxes with tiny mirrors set inside the lid. The use of patches and cosmetics by men reached its height with the Macaronis, when exaggerated use of cosmetics was seen as a mark of aristocratic folly or was used to lampoon those with inappropriate social pretension. In Hogarth’s engravings paint and patches often symbolise sexual and moral corruption whilst for some 18th century writers the increasing use of cosmetics epitomised corruption in an age of rapid and social economic change.

The ornate, expensive and often gilded items of 18th century toilette furniture – mirrors, tables, pots and brushes, were essential to a fashionable woman’s beauty routine as were ‘Chinese’ boxes containing the ingredients for cosmetics. Large shells were used to mix them in whilst later in the century they held readymade preparations. Small Chinese boxes held saturated papers of different colours – white for face, black for eyebrows and rouge for the cheeks. A gentleman’s dressing box contained perfume bottles, powder and rouge to be applied after shaving, brushes and hair oil, curling irons and scissors. Pomatum for the hair and scalp was made from cucumbers, snails or sheep’s trotters whilst hair oil was made from poppies, almonds and hazels. For a gentleman another danger came from his hat – historically men’s hats had been made from beaver which felts naturally but by the 18th century the supplies of beaver had dwindled to be replaced in England by rabbit and hare which do not felt well. Hatters had to use a solution containing mercury which was not only dangerous to them but to the wearer, causing baldness and blood poisoning if the scalp was irritated.

By the late 18th century advertisements for cosmetics were to be found: one in The Morning Chronicle and London Advertiser (27 May 1772) recommended “The Toilet of Flora’ by Pierre– Joseph Buc’hoz, which amongst other items offered recipes for cosmetics for men. A later ‘improved’ edition of 1779 offered recipes for women “that would smooth and brighten the skin and take off the appearance of old age and decay “. There were also advertisements for hair dyes as wigs were dispensed with and grey or red hair revealed, both considered undesirable though Atkinson’s Vegetable Dye could change this misfortune to auburn or black. Advertisements too for tooth powders which contained bicarbonate of soda to whiten the teeth, though others contained abrasive substances which wore away the enamel. A Mr Rymer of Reigate in Surrey used Peruvian bark to make his tooth powder to brush on with the corner of a cloth or a toothbrush. Bone and ivory toothbrushes had bored holes filled with animal bristles held in place by thin wire but more popular were toothpicks made from pointed pieces of wood or quill which the wealthy kept in ornate gold or ivory boxes. With poor dental hygiene bad breath was common so people also carried lozenges to sweeten the breath which were made from cloves or cinnamon, bramble leaves or honey mixed with ashes. False teeth were obtainable, with teeth from dead people being wired onto wood or bone and inserted into the mouth but being clumsy and painful most people preferred their black stumps.

As the 18th century drew to a close and fashions reflected a more outdoor, natural look, it became inappropriate for young women to paint their faces and society became vicious towards older ladies who resorted to paint and other beauty aids to hide aging complexions. Face painting became associated with vanity, deception and the illusion of beauty, so together with Rousseau’s concepts of nature and changing attitudes towards cleanliness, a new era of fashion and cosmetics began.