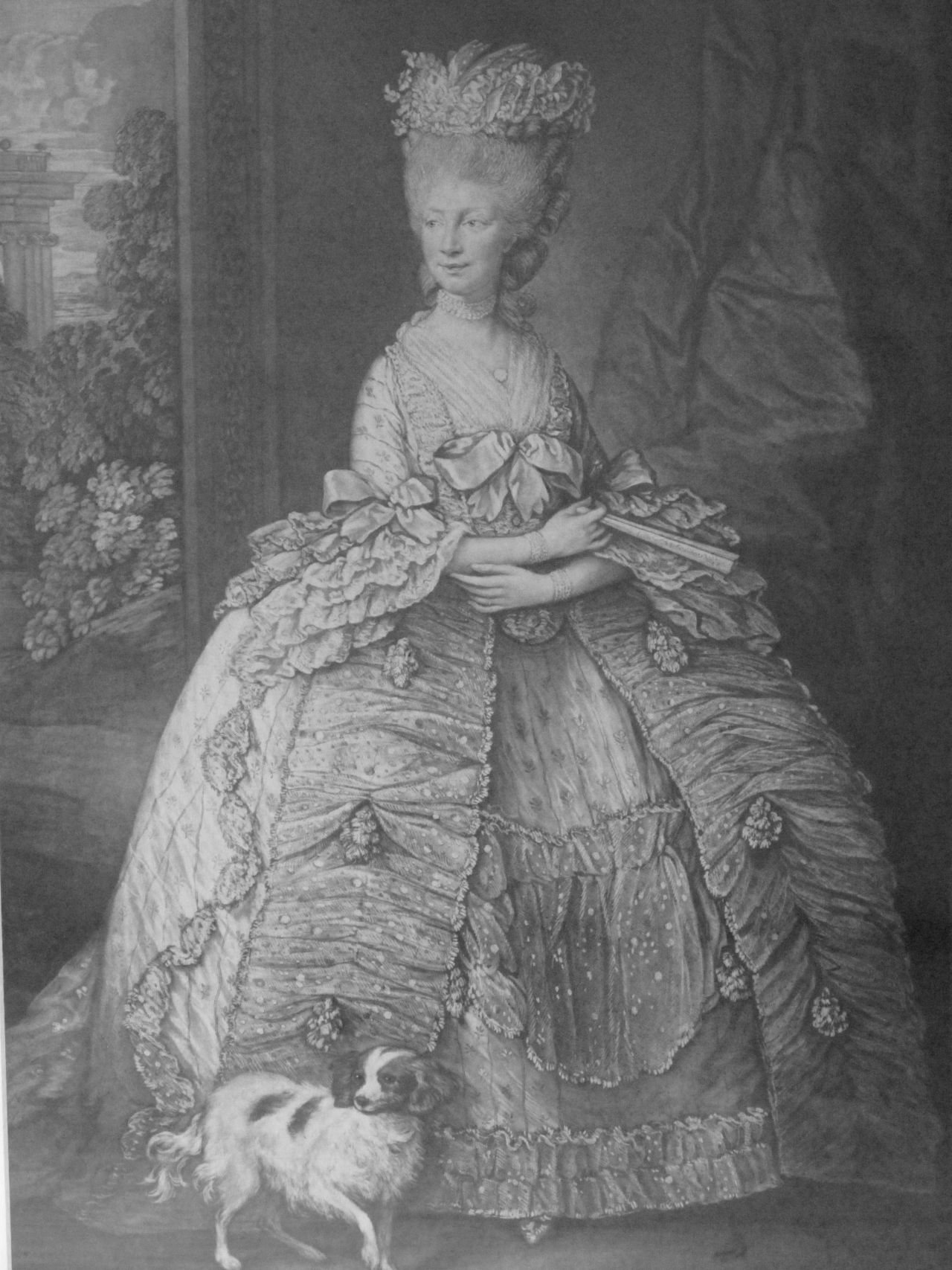 Throughout The Johnston Collection’s portraits of women, including the mezzotint of Queen Charlotte after Gainsborough, fashionable stomachers abound.

Queen Charlotte’s portrait brings to mind this frothy little confection (illustrated), from the collection of the Museum of New Zealand Te Papa Tongarewa (Te Papa). Pinked at the edges and criss-crossed with faux ribbons of lace, it is reminiscent of Jean-Honoré Fragonard’s (French, 173[2]–1806) exuberant paintings of fashionable spirited women revelling in the ‘windy air of freedom’.(1)

A stomacher is a V shaped panel worn with open front dresses from the late 15th century to the 1770s. Stomachers could be elaborately embroidered, adorned with lace and ribbons, and made from either contrasting or matching dress fabric. Stomachers were laced in place, or as in the case of this example, pinned to the wearer’s stiffened stays. If you look closely, you can still see the pin holes in the silk.

This stomacher is made from ivory silk woven in Spitalfields, an area in East London that was synonymous with silk weaving in the 17th and 18th centuries. The silk features a pattern of brocaded flowers.  The stomacher is decorated with silk bobbin lace and simulated pearl bead buttons. The ‘pearls’ have been cleverly made from covering brass with fish scales.

The stomacher was originally worn with an open robed gown made from the same fabric. It is one of 26 surviving pieces from an unpicked gown dating from between 1750 and 1760. The other pieces include the bodice, skirt panels, sleeves and flounces and bows. Sewn with a simple running stitch, 18th century gowns were frequently unpicked. Indeed, it is rare to find a complete, unaltered dress. As silk fabrics were very expensive, women frequently altered their dresses – changing trimmings to give a much-worn dress a fresh look or to hide a stain or unpicked and re-worked into the latest fashion. There was nothing shameful in extending the life of a dress.

Indeed, Mrs Charlotte Papendiek (1765-1840), who was a young mother in attendance at the court of King George III and Queen Charlotte, noted in her journal that ‘a silk gown would go on for years, a little furbished up with new trimmings – and a young woman was rather complimented than otherwise’.(2) It was perhaps such a prudent outlook that earned her the position of Assistant Keeper of the Wardrobe to Her Majesty in the late 1790s. Dresses were also frequently handed down to poorer relatives or servants or placed on the bustling second hand market.

This second gown from Te Papa’s collection is made from fabric woven in the same period as the stomacher. Spitalfield’s weavers became renowned in the 1750s for their cream silks adorned with naturalistic flowers. The style of dress, however, is much later than the fabric.  The style is known as a robe à l’anglaise, or English-style gown, and was fashionable both in England and across Europe in the 1770s and 1780s. It is characterised by a close-fitting back, as opposed to the robe à la française, or ‘sack-back’ gown, which featured pleats falling from the shoulders to the floor. The robe à la française had largely gone out of fashion by 1780, although Queen Charlotte can be seen wearing such a gown in Gainsborough’s portrait (A1012.2-1989). While unfashionable as everyday wear, the style was still worn as court dress.

The dress does not require a stomacher as the gown closes at the front with a set of internal linen ties. It features fashionable elbow length sleeves simply finished with pinked and pleated cuffs rather than ornate flounces of the earlier decades.

Miraculously, both the dress and matching flounced petticoat are intact. Neither show the tell-tale signs – trails of little pin prick holes - of unpicking and refashioning. In this case, the fabric was probably purchased in the 1750s and for some reason, set aside. By the 1780s, the silk would not have been obviously unfashionable.

In order to create the desired 1780s silhouette, the wearer would have worn stays to give her torso a smooth conical shape, and another foundation garment known as a ‘bum roll’ – a precursor to the more pretty sounding bustle. The bum roll increased the illusion of ample child-bearing hips, while emphasising the waist, and provided an expansive surface across which to display the magnificence of one’s choice of silk.