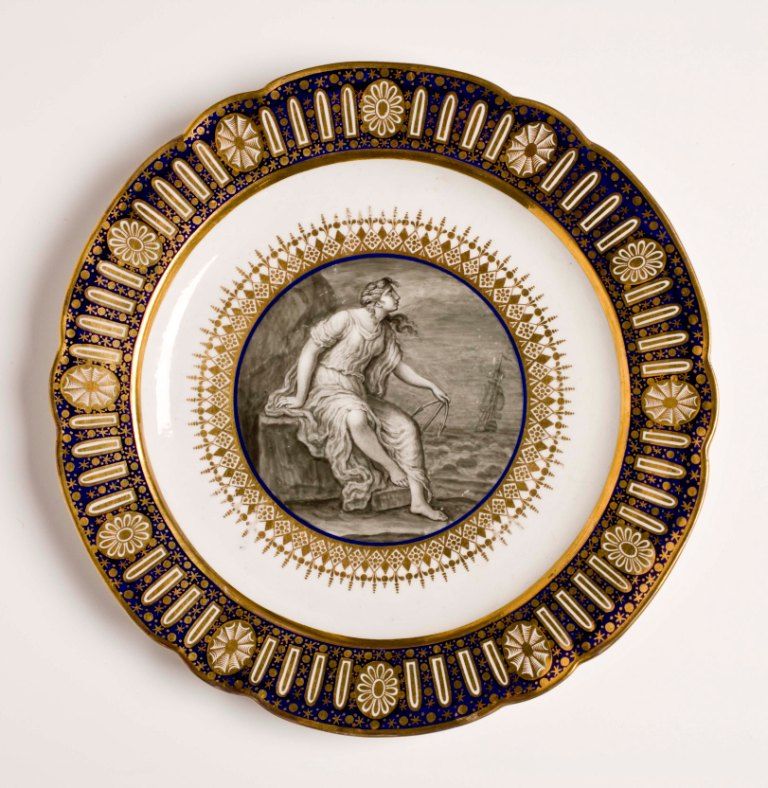 Of all the ceramics factories which were established and flourished in England during the Industrial Revolution, only one or two rival Worcester for innovation and quality, nor match its illustrious clientele.

The enterprise was established in 1751 by Dr John Wall (1708 - 1776) and his business partner William Davis (dates unknown), and survived for over two and a half centuries. Dr Wall was a remarkable man: a physician prominent in medical research, a talented designer and painter, the founder of a charitable hospital, as well as an innovative and successful entrepreneur. He was married to Catherine, the cousin of Samuel Sandys, (1695 –1770) 1st Baron Sandys of Ombersley. He was also well connected in the commercial world which meant that he was able to engage several investors to set up the Worcester factory.

The ‘Dr Wall period’ saw the introduction of unique methods of producing porcelain to imitate imports from China and compete with the Meissen porcelain manufactory and other factories in Europe. Successful so[1]called soft paste recipes included mixtures of kaolin (China clay), quartz, feldspar and frit or glass fired at between 1100 and 1250 °C. The resulting ceramic body was semi[1]translucent and of exceptional quality. Utility wares in underglaze blue and white produced from 1755 onward are among the finest; they were later accompanied by an increasing range of transfer-printed items and decorative ’cabinet pieces’ in overglaze enamels.

In 1783 the factory was bought by Thomas Flight (b? - died 1800) who installed his sons John and Joseph as managers. This period saw the introduction of new styles inspired by competition from France. In 1788 the factory was visited by George III and granted a royal warrant; henceforth it would be known as Royal Worcester.

Following John Flight’s death in 1791, one Martin Barr joined the firm as a partner. The development of the ceramic art continued during the ‘Flight Barr and Barr period (1783-1840) with a continuation of the trend toward polychrome ornamentation and more flamboyant style.

The 1780s and 90s also saw further expansion of Worcester’s popularity with the British nobility and the growing middle classes. The Prince and Princess of Wales were among the customers at a time when it became fashionable to represent one’s wealth in country properties and to imprint coats of arms on dinner services, tea wares and vases. The list of Worcester painters employed in the 18th and early 19th century reads like a who’s who in ceramic design including John Pennington (c. 1765-1842).

Among the Pennington designs is a 260-piece dinner service commissioned in 1790 by HRH Prince William (1765-1837), Duke of Clarence (1790-1830) who later became King William IV (reigned 1830-1837). This is known as the Hope service and a piece is represented in the Collection. The Duke paid 800 guineas for the service delivered to him just over a year later. The design features Hope - a figure from Greek mythology - painted in monochrome using the French-inspired grisaille (in shades of grey) style. The figure of Hope is depicted in a variety of poses with an anchor and often a ship in the distance. The plates have an indented border and are decorated with a formal blue band and gilding around the edge.

The early 19th century was an expansionary period with the introduction of many elegant designs and a trend toward patriotic items, however Martin Barr died in 1813 leaving his two sons to continue in partnership with Joseph Flight. By the time Worcester merged with Chamberlain in 1840, the firm was too heavily reliant on traditional decorative style. This led to a decline in the company’s fortunes over the following decades, so much so that Worcester was not prominent at The Great Exhibition in 1851.

In 1852 two Irishmen, Richard William Binns (1819–1900) and William Henry Kerr (1823–1879) sparked a revival in Worcester’s popularity with the introduction of new products and glazes including majolica, Parian and bone china, together with more modern and innovative design and marketing techniques. The acquisition of the rival Grainger factory (est. 1804) in 1889, also brought with it several different and more contemporary designs.

The 20th century presented new challenges as Worcester attempted to keep pace with changing tastes and the effects of two world wars. Finally, the ravages of competition from Asian manufacturers, and despite a merger with Spode in 2006, forced the great company with its proud tradition into liquidation. Although the rights were bought by Portmerion, the last trading date for Royal Worcester was June 2009.