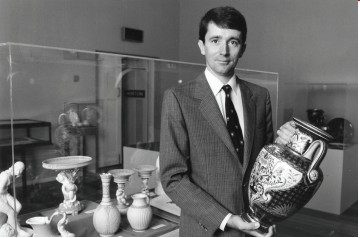 On 20 April 2017 the Melbourne art world lost one of its most beloved philanthropists, Dr. Robert Wilson. A world-renowned collector of antique ceramics, Robert was a longstanding friend of The Johnston Collection through his successful series of lectures focusing on his great passion, Minton porcelain. he was widely known for his knowledge and taste in fine ceramics, and even more for his outstanding generosity as both a lender and donor.

Robert was born and grew up in Camberwell. He was a high achiever in his academic pursuits: after completing his secondary education at Camberwell High School, he went on to complete a doctorate degree in theoretical chemistry at the University of Melbourne and Monash University. He lectured in chemistry and physics in Canada and the USA, and locally at Caulfield Institute, La Trobe, Monash and the University of Melbourne. During the late 1970s, Robert’s keen interest in antiques led him to establish Camberwell Antiques. He acquired a remarkable collection of 19th century ceramics and glass, including Minton, Worcester, Copeland, Burmantofts, Doulton and Thomas Webb. Over the years he steadily donated many of his finest pieces to the National Gallery of Victoria, making him the most significant benefactor in their Decorative Arts collection.

Robert’s passion for the arts led him to numerous and wide-ranging appointments such as Honorary Valuer and President of the Ceramics & Glass Circle of Australia and Vice-Chairman of the Decorative & Fine Arts Society of Australia. Later, he became Private Secretary and Advisor to the Victorian Minister for the Arts (1985-6), General Manager of 3MBS-FM (1991- 1995) and for many years, the Manager for Public Access at the National Gallery of Victoria (1995-2011). On a personal level, Robert will be missed by his many friends in the museum world for his kindness, his gentle nature and often impish humour.

This article was originally published in Fairhall, Issue 22, October 2017, pp 38.