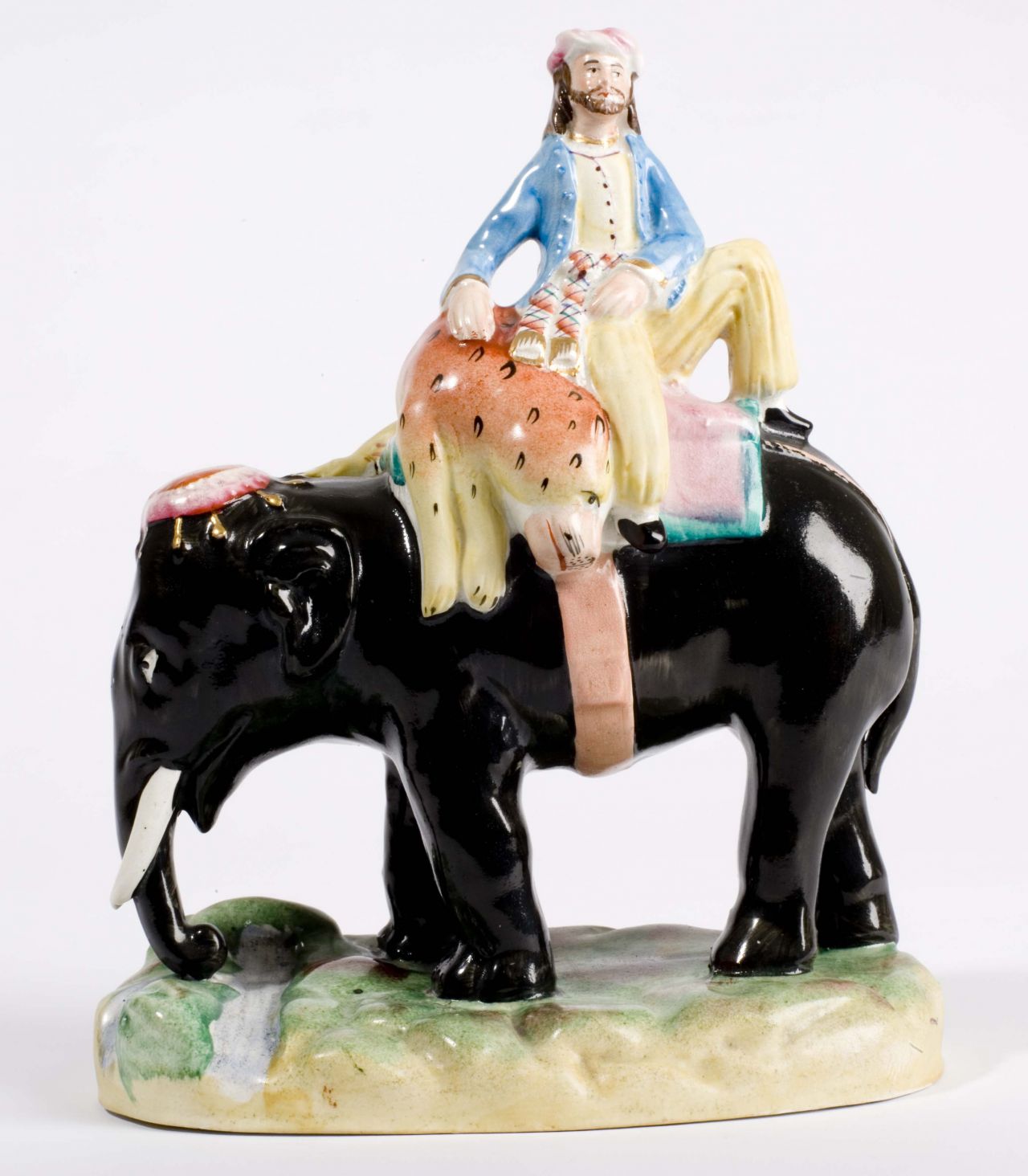 There are lots of ‘elephants in rooms’ these days taking any form we choose to give them but at the Collection there are, of course, many modelled, painted, cast and carved ones that render the above phrase literally true.

Staffordshire potters have been making their easily recognised artefacts from the early 19th century and some continue today. The figures were hand finished and painted but formed in two-part moulds which reduced individuality but made them accessible to, affordable for and popular with a large market.

Elephants, like other exotic animals, were a popular modelling subject. They reflected contemporary history and events that appealed to the popular imagination, representing both charm and a slice of history. One such was Jumbo, the elephant at the London Zoo, which was bought by Barnum and shipped to America where it famously charged a train and died as a result.

The Collection’s Staffordshire figurines, moulded lead[1]glazed earthenware enamelled in bright colours, dated circa 1850, and described as the ‘Leopard Hunter’ are, however, Indian in inspiration and depict caparisoned elephants with turbaned Rajahs/mahouts in eastern costume and dead leopards on their backs. There are two right-facing Tallis factory pieces and another left-facing one that appears to be its pair, yet it is catalogued ‘in the manner of the Parr factory’. This suggests different makers: Parr being a long line of important potters and partnerships and Tallis, a name which first appeared in 1849.

The Indian subject of the Mughal figure on the glamorously-bedecked elephant is certainly not British and reflects the era of the Mughal rulers followed by the British Raj, in which game hunting had long been a pastime for the maharajahs arising out of Mughal Emperor Jalal-ud-Din Muhammed Akbar’s passion for big game. Royal hunting or ‘shikar’ was carried on until the dynasty fell in 1857, the outings considered exotic, heroic sport for guests with leopards and tigers the ultimate trophies.

Staging elaborate big game hunts was for the British Raj that succeeded the Mughals, an activity that showcased their royalty, power and wealth. Along with their Indian counterparts, the maharajahs, the powerful British went out in large parties, carried by 10, 20, 30 or even 40 elephants. Servants often drugged and baited tigers before the hunters arrived so there was little danger, even though the cats were described as terrible, bloodthirsty, man-eating beasts.

A Christie’s reference suggests that there should be an interesting story attached to these figures but none is known at present. The group is named in The Johnston Collection as the Leopard Hunter but Christie’s refer to it as the Tiger Hunter and its dates of production appear to extend from 1850 to 1900. The discrepancy, if there is one, may be due to the potters never having seen a tiger and therefore relying on hearsay. Leopards and tigers do coexist in India but in either case the ‘chevron’ style marks on the figurines are not accurate zoologically.