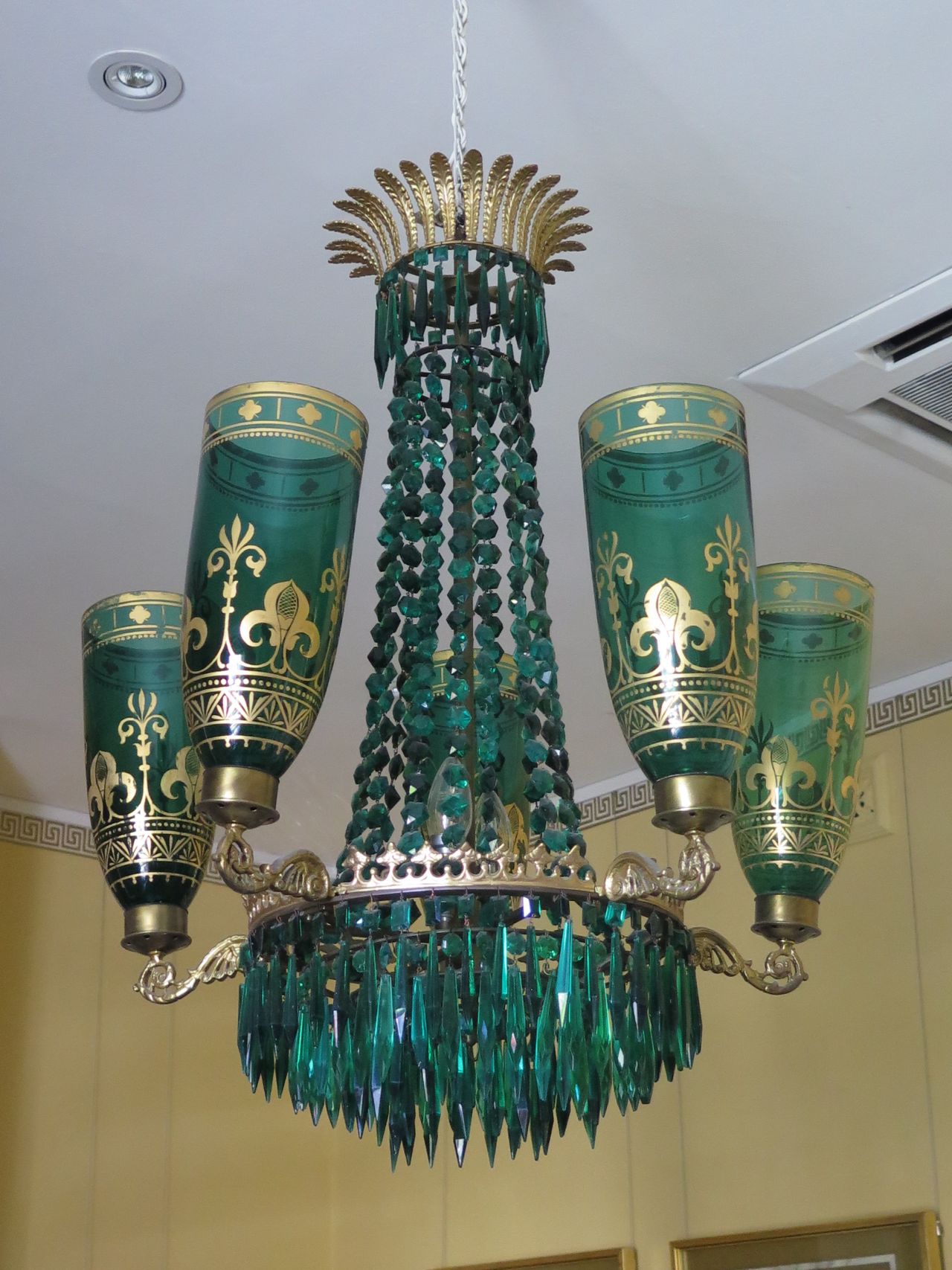 For centuries the chandelier has been the most iconic lighting form, associated with wealth and power and a burning symbol of success and social standing.

The green chandelier in The Yellow Room at The Johnston Collection is attributed to the firm of F & C Osler of Birmingham and London.

The company of F & C Osler were recognised as the leading makers of chandeliers and lighting during the 19th century. Their pieces were frequently stamped with the maker’s mark, making their high standard of workmanship in both metal and glass recognizable. The glassworks were founded by Thomas Osler in 1807 in Birmingham. The firm originally worked in the ‘Glass Toy Trade’, making trinkets and glass ornaments. An order for icicle drops turned into crystal drops and then chandeliers.

During the early 19th century a heavy duty was levied on glass manufacturing and an Exciseman was present on a daily basis to ensure all duty was paid. So, illegal trade put manufacturers at a disadvantage. Thomas Osler (1783–?) was a scholar rather than a businessman but when his sons Follett Abraham Osler (1808–1903), and [Thomas] Clarkson Osler (?–?), joined him in the business, it became a thriving concern, opening in London in 1845 before expanding into overseas markets.

A commission from Ibrahim Pacha, the ruler of India, in 1847 for an enormous pair of candelabra to place before the tomb of the prophet Mahomet at Mecca generated such interest that HRH the Prince Consort (Prince Albert) paid them a visit. It was an even larger and more grand candelabra exhibited at the Exhibition of Industrial Arts in Birmingham, opened by the Prince Consort in 1849 that inspired Prince Albert with the idea to hold an exhibition in London, to be known as The Great Exhibition, that opened in 1851.

F & C Osler were commissioned to build a giant crystal fountain for the Great Exhibition in Hyde Park London. The fountain stood 8.25 meters or 27 feet high and contained 4,000 kgs or 4 tons of crystal. The brochure described it as “perhaps the most striking object in the Exhibition, the lightness and beauty, as well as the perfect novelty of its design, have rendered it the theme of admiration with all visitors.” In 1858, when Queen Victoria opened Aston Hall in Birmingham to the public, F & C Osler produced the table service. The Queen was so impressed that she personally took possession of a champagne glass and carried it safely with her on the journey to London.

Despite the glamour of their fountains, ornate furniture and table ware designs, it was the chandelier which made their reputation. F & C Osler were the leaders in their field and they took the art of “Brilliant Cut Glass” to new heights, especially during the 1870’s when the glass surface was covered with intersecting cuts, creating larger patterns. The basic motifs used were stars, polygonal diamonds, strawberry diamonds and fan scallops. During the 1880’s, the designs became even more complicated and their high-quality products such as mirrored furniture, were popular with Indian royalty as well as Europeans. The transition to gas and later electricity as methods of illumination added to the evolution of more and more sophisticated designs.

The wealth within India and the efficient shipping links led Osler to choose India as the largest market place outside the United Kingdom and showrooms were used in Bombay (Mumbai) and Calcutta (Kolkata). Many Osler chandeliers and light fittings survive and can still be found in India to this day.

Following the Wall Street crash in 1929, demand for trade with India began to fade. In 1936 when The Crystal Palace burnt to the ground, it took with it Osler’s famous crystal fountain. Following the Second World War, competition for cheaper methods of lighting production and the use of plastics meant the company struggled. The company continued until the showrooms were closed in 1964 and in 1965, after trading for 158 years, all existing trade ceased.

Today, chandeliers remain prestigious and examples of 19th century ones are still sought after for their unsurpassed quality and designs.

This article was originally published in fairhall, issue 25, October 2018, pp 17.