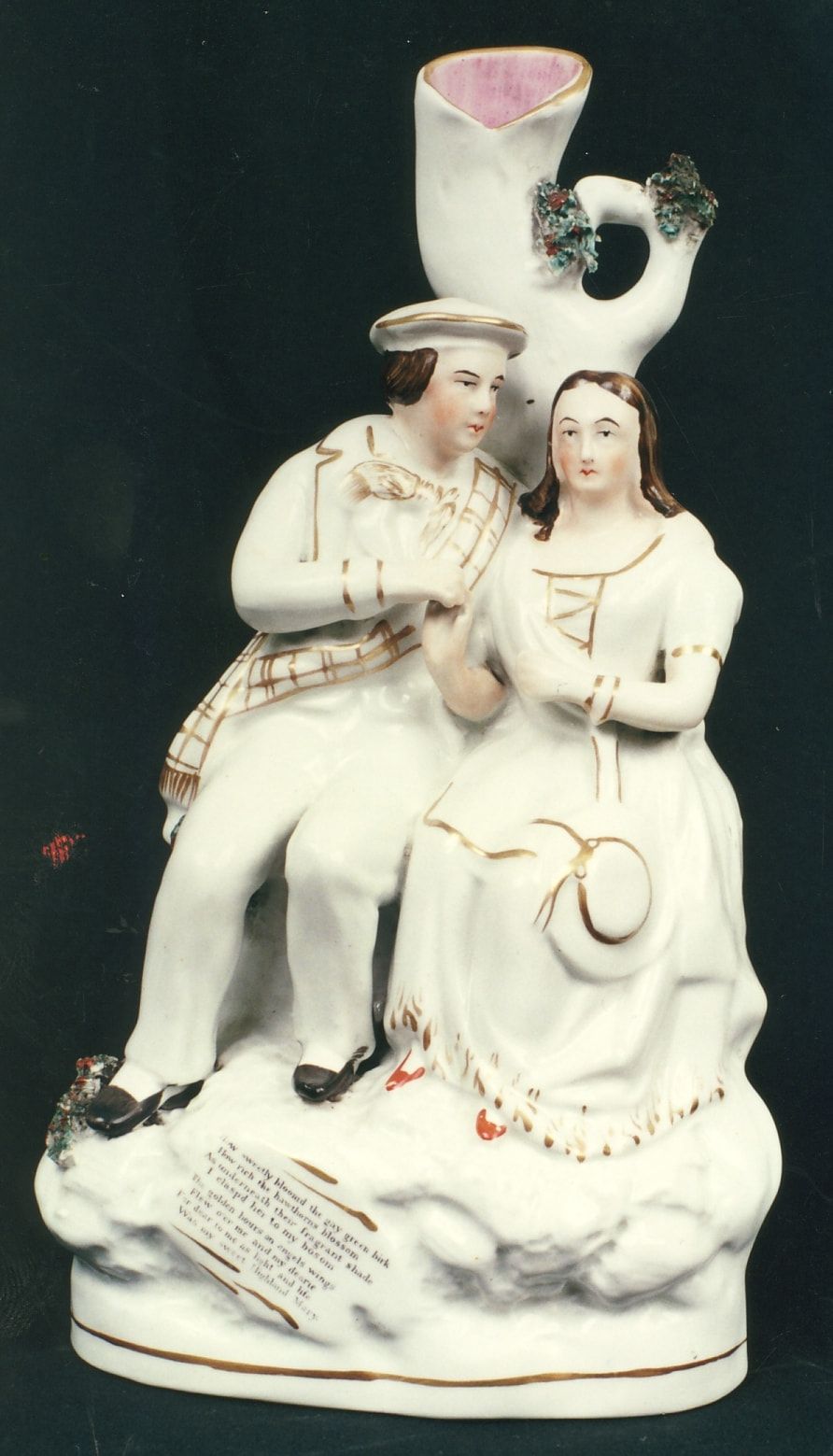 The area of Staffordshire in the West Midlands of England had an abundance of clay and coal, making it an ideal area for pottery and ceramic production.

Many small potteries mass produced subjects popular with the public. As the majority of people could not read, models were inspired not only by Royalty but also theatre programmes, music covers and popular culture such as The London Illustrated News. Such models included actresses, poets, war heroes, politicians and exotic animals.

Earthenware flat backs and figurines for mantelpiece decoration were first produced in Staffordshire in the late 1830’s. The earliest dateable Staffordshire figures appear to be those of Queen Victoria who was crowned in 1837. Her family provided many subjects, none more popular than her spaniel dogs.

The quality of the work varied due to the wide diversity of potters, artisans, factories and cost cutting methods used. Since moulds were used in production, they were cheap and easy to make and large quantities could be made.

Skilled pottery painters worked on high end pottery and porcelain, while unskilled women and children painted the cheaper figures quickly and freely. Painting could cover the whole piece or be limited to highlights such as this spill vase which would have been used to store the wax tapers or spills, for lighting the fire.

How sweetly bloom’d the gay green birk, How rich the hawthorn’s blossom, As underneath their fragrant shade, I clasp’d her to my bosom! The golden Hours on angel wings, Flew o’er me and my Dearie, For dear to me, as light and life, Was my sweet Highland Mary”

Burns, regarded as the national poet of Scotland wrote in the Scots language as well as Standard English, making his work readily accessible. He was regarded as a pioneer of the Romantic Movement. During the 19th and 20th centuries his life and work was greatly celebrated.

Mary Campbell was one of his many loves, despite the relationship only lasting a couple of months. He was broken-hearted from his rejection by his previous lover, Jean Armour (1765 –1834), he then met and quickly became betrothed to Mary. Shortly afterwards, Mary returned home to nurse her sick brother, but she also fell ill and died. Burns was overcome with grief for many years to come, and in 1786, he wrote a song The Highland Lassie O which suggests he invited Mary to accompany him to Jamaica in the West Indies.

She may not have been quite the ‘ideal maiden,’ but their love story made them a popular topic for the Staffordshire potters to immortalise. In 1920, Mary Campbell’s grave was opened and revealed the remains of an infant’s coffin which added to the poignancy of his memories, so deeply expressed in his poem Highland Mary.