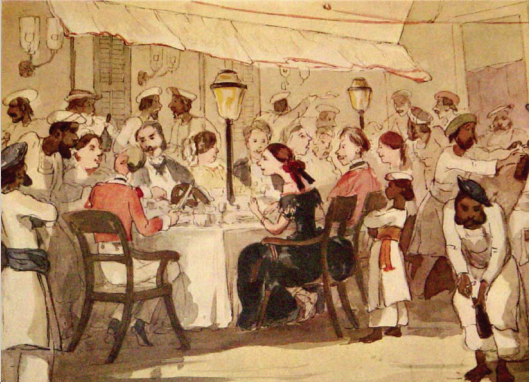 Britain’s East India Company activities in India accumulated great wealth and power for England in the 18th and early 19th centuries. Regional trading centres were established and territories claimed through treaties and warfare. India influenced architecture and design, represented nowhere better than in the glorious Royal Pavilion at Brighton; Indian textiles informed Regency fashions and domestic soft furnishings; Indian terms crept into English language, including bungalow, veranda, pyjamas, even shampoo. But there was no better way to capture the flavour of India than through food, and in particular, curry.

Foreign and mysterious, curries were a way for people in Britain to ‘taste’ India. The earliest known curry recipe published in English was in Hannah Glasse’s Art of Cookery Made Plain and Easy in 1747, ‘To make a currey the India way’. Essentially it was a stew flavoured with thirty peppercorns and an unspecified quantity of coriander seeds ‘roasted on a clean shovel’. The recipe was significantly modified in Glasse’s fourth edition in 1751, indicating an improved understanding of curry making and more closely resembling what we would recognise today as an Indian style curry.

Recipes for curry powders abound in 19th century cookery books, many claiming authenticity, having been endorsed by someone who had spent time in India. Recipes called for familiar spices such as ginger, cloves, cinnamon, pepper and cayenne (chilli), but also more exotic Arabic flavours - cumin, cardamom and turmeric, which would have to be acquired from an apothecary or specialty grocer. Curries became increasingly anglicised, as green mangoes were substituted with sour apples, raisins replaced tamarind, bay leaves used instead of tejpat (cinnamon leaves) or curry leaves.

Other British-Indian dishes such as rice ‘pilau’ and kedgeree, mulligatawny soup and Indian pickles or piccalilli came into vogue. English cooks were criticised for their tendency to use too much cayenne, the heat overpowering the aromatic qualities of the other spices. The taste for all-things-Indian extended to the colonies, not least Australia, which was in easy reach of India. Indian curries became fashionable on elite colonial tables in the 1810s. In a letter from her godmother in England in 1812, Maria Macarthur (daughter of ex-Governor King) was advised to include curries of rabbit, fowl or veal on her sociable menus; Governor Macquarie, who had served in India between 1788 and 1800, served ‘curry of duck’ on a menu at Government House in Sydney in 1814. Imported curry powders were advertised for sale in the Sydney Gazette from 1813.

As the 19th century progressed, the taste for curry filtered through to the middle classes, so much so that it was noted in 1852:

Curry, which was formerly a dish almost exclusively for the table of those who had made a long residence in India, is now so completely naturalised, that few dinners are thought complete unless one is on the table.

So ingrained and ‘every-day’ was India in the minds of mid-19th century subjects of the British Empire that curries were relegated to ‘cold meat cookery’ chapters in cookbooks, as a leftovers dish. India may have been the jewel of the Empire, but it had lost its prestige on the dinner table.