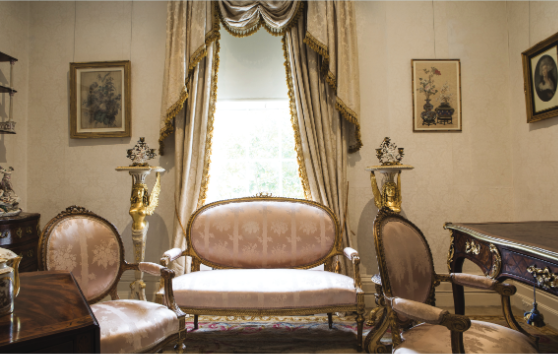 As summer turns to autumn, The Johnston Collection is presenting a thought-provoking tour of its exhibition-house entitled BEING MODERN. William Johnston: his Residence & Collection.

The ‘modernity’ of the title would, at first glance, appear to refer to the modernity of the Georgian and Regency periods – which encompassed the reigns of the first five Hanoverian kings of Britain: Georges I, II, III and IV (the ‘Prince Regent’) and William IV, from 1714 to 1837.  The Johnston Collection is well known for its 18th century European fine and decorative arts, and the current installation celebrates these objects in a series of ‘period room’ displays.

The Georgian and Regency periods witnessed a transformation in the social landscape of Britain (and its colonies), changing the way people experienced life as well as their understanding of their place in an expanding Enlightenment world.  It was a time of self-conscious culture and collecting, and is now viewed as foreshadowing our own modern-day ‘commodity culture’. Certainly, a major innovation of the period was the new perception and representation of domestic spaces, which in turn, led to the emergence of celebrity designers, craftspeople and ‘tastemakers’ – Adam, Chippendale, Hepplewhite, Sheraton and Wedgwood – some of whose creations can be closely examined in the Fairhall room settings.  The Collection also represents the era’s expanding commercial demand for decorative items, and alongside the luxury furnishings are placed more mass-produced examples, such as Grand Tour souvenirs and Staffordshire figurines.

But the Being Modern installation is also modern in another sense, in that the installation is actually a ‘re-staging’ of the original presentation of The Johnston Collection, as it was when the house museum first opened in November 1990, as part of Melbourne’s Spoleto Festival. In doing so, this Johnston Collection display joins the recent wave of ‘restaged, recreated and reprised exhibitions’ of art that have energised the global art world.[1]  In fact, art historian Terry Smith has identified ‘re-curation’ as one of ‘the new “turns” in a contemporary kind of curatorial thinking’ – one that sees curators recovering forgotten histories in order to re-think current practice.’[2]

The Johnston Collection’s Being Modern is not the first time Australian curators have restaged an earlier exhibition.  For instance, in 2006, Lesley Harding re-created Nolan and Tucker’s joint Rome exhibition of 1954 at Heide; while Nick Waterlow and Annabel Pegus, presented Colour in art: revisiting 1919, in 2008, which reconstructed Roy de Maistre and Roland Wakelin’s famous exhibition on colour abstraction; and at the moment, the NGV is preparing to restage The Field, of 1968, the landmark exhibition at the newly opened St Kilda Road premises.[3]

Being Modern returns Fairhall to the way it looked when visitors first experienced Melbourne’s ‘newest house museum’ over a quarter of a century ago.  Using archival photographs, transparencies, floor plans and layouts, one of The Johnston Collection’s volunteers, Dorothy Morgan, has pieced together the original installation - and atmosphere - of Fairhall in 1990.  This inaugural display and the house museum itself were the products of expert deliberation during the three years following William Johnston’s death in 1986.  The Trustees consulted the conservation architect, Peter Lovell; the interior designer, David McCabe and the landscape architect, John Patrick, for advice on how best to restore Fairhall into a suitable setting for Johnston’s substantial and diverse collection of predominantly Georgian and Regency art and design.  They eventually decided to simply ‘enhance any obvious stylistic themes already there’ in the Georgian-inspired terrace house – although some interventions occurred, such as Johnston’s bedroom being converted into a ‘breakfast room’ with a “Ham House” feel’.[4]

The founding director, Judith Thompson, oversaw all the details of the first installation, arranging for the re-upholstering of furniture and ordering appropriate fabric from England. Thompson, a former curator of decorative arts at the Art Gallery of South Australia, was delighted to present this ‘fine specialist collection’ in a unified manner, with furniture and objects together within rooms of ‘appropriate proportions and decorations’.  The eight main rooms of the house were organised according to themes reflecting aspects of the Collection – especially its furniture.  Thus, the Green Drawing Room showcased ‘Mahogany’, the Blue Room was devoted to ‘Walnut’ and the Kitchen presented ‘Oak’.  The White room was conceived as ‘an intimate French Salon’, while the Yellow Drawing Room and Writing (Morning) Room evoked the eclecticism of the Regency and Empire styles.[5]

For visitors to the new house museum in 1990, the richness and variety of the Collection – encompassing furniture, porcelain, silver, mirrors, chandeliers, paintings, sculpture, miniatures, objets d’art, etc. - was a revelation. As one commentator observed, the Georgian and Regency focus appealed ‘to those who have an interest in and appreciation for architecture, decorative arts and interior design that is not satisfied by the traditional historic houses in Australia, that are almost exclusively of the Victorian era.’[6]  In other words, The Johnston Collection was the antithesis of colonial stodginess, and its stylish and evocative European furnishings could not fail to ‘stimulate the imagination’ of its initial audience.

Nearly three decades later, what insights do we gain today from the restaging of the inaugural exhibition of The Johnston Collection at Fairhall?  How have the intervening years and the many subsequent installations presented in this house museum influenced the way we respond to this late 20th century evocation of ‘fine objects in elegant period settings’? Without doubt, the more dramatic and interventionist house museum tours of recent times – think of the metamorphoses caused by guest curators Rosslynd Piggott’s Murmur (mûr’ mer) noun (2013) or Barking Spider Visual Theatre’s House of Dreams (2016) - have encouraged the public to perceive The Johnston Collection as a vibrant stage or exhibition space rather than a static historic interior.  This expectation means that one ceases to accept the house and its collection ‘at face value’ and instead enjoys it for its sense of theatre and artifice.

Accordingly, when one participates in the Being Modern tour, it seems not so much a Georgian residence with matching furnishings, as a Georgian Revival reconstruction, whose object-filled rooms in the ‘English country-house style’ tell us more about the 20th century’s enthusiasm for art and antiques than the actual domestic spaces of the 18th century.[7] Even the themed rooms of the 1990 installation take their inspiration from Percy Macquoid’s four-volume A History of English Furniture (1904), one of the great 20th century books on antiques, which famously divided the major periods of manufacture by timber: the Age of Oak, Walnut and Mahogany.[8] Of course, the house-museum’s founder, William Johnston, was an influential antiques dealer as well as a collector, who adopted and promoted the fashionable  ‘English country-house aesthetic’ in his showrooms at Kent Antiques in High Street, Armadale, as well as in his town houses and country property.  For Johnston, 18th century craftsmanship and design was ‘timeless’ and entirely relevant to the 20thcentury – especially given the popularity of the Neo-Georgian architectural style in Britain, America and Australia from the 1920s onwards.[9] The historicism of the Georgian Revival was one of the inspirations behind The Johnston Collection – and for much of the 20th century simply another way of ‘being modern’.

Terry Smith has suggested that re-curation can be a means of constructing ‘a dialogue with the museum’s institutional history and its unique location’.  This is indeed that case with The Johnston Collection’s restaging of its inaugural exhibition of 1990.

3 Colour in Art: revisiting 1919 was held at Ivan Dougherty Gallery in 2008 and subsequently toured in Modern Times: the untold story of Modernism in Australia in 2009; A Link and a Trust: Albert Tucker and Sidney Nolan’s Rome Exhibition, Heide Museum of Modern Art, 2006; The Field Revisited opens at the NGV in May 2018.