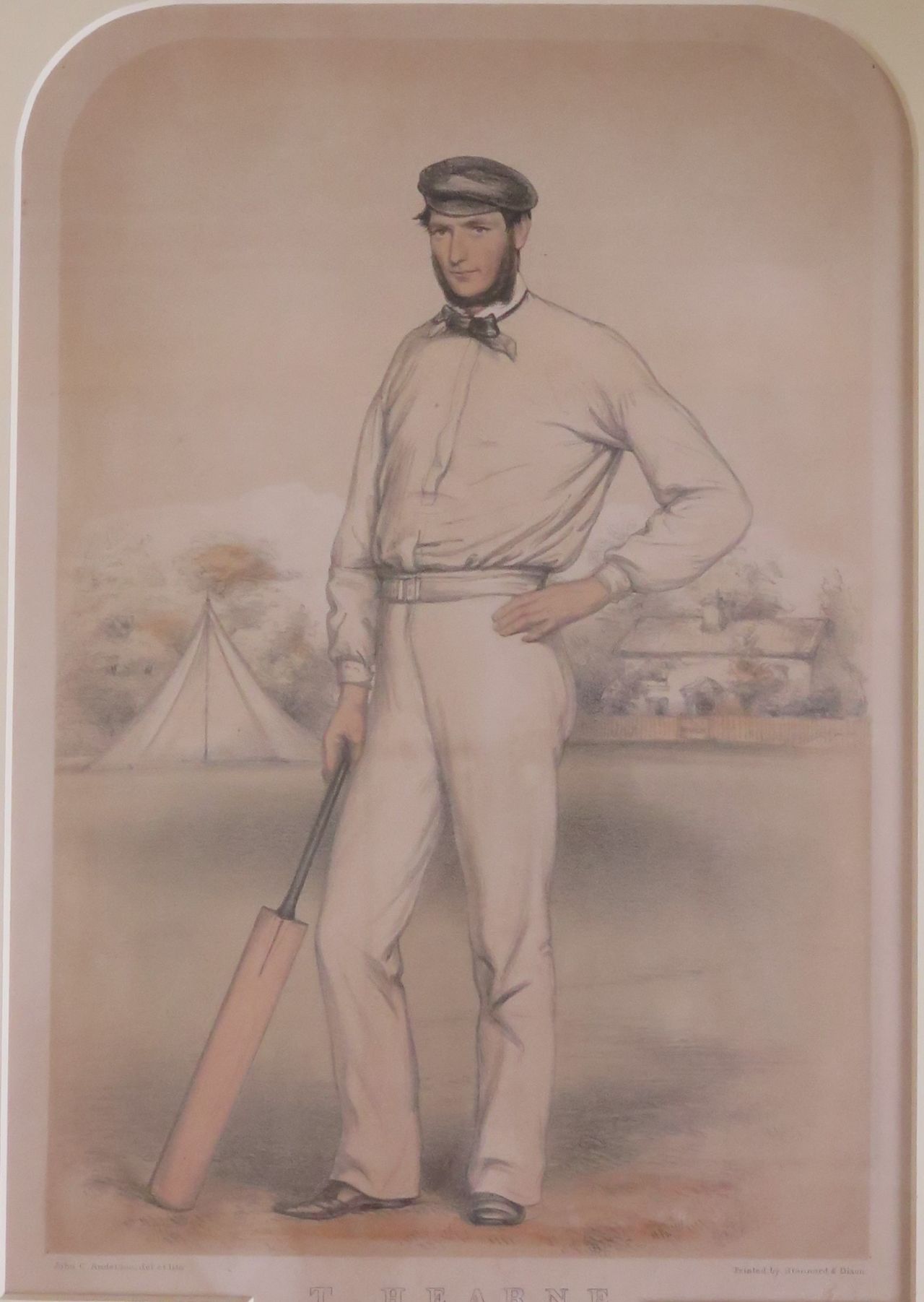 This charming delicately coloured lithograph of a cricketer captioned ‘T. HEARNE. BORN AT CHALFONT, ST PETER’S, BUCKS, SEP 4th 1826’ could almost be out of the pages of a Boy’s Own paper but for the fact that that publication did not begin until 1879. In fact, this work was published by F. Lillywhite, Kennington Oval in 1859.

Research reveals that the subject is Thomas Hearne (1826-1900), an English professional cricketer who played for Middlesex, the Marylebone Cricket Club and England. He and his brother George founded a notable cricketing family of which 13 members played first class cricket and six also played test cricket, four for England, one for South Africa and one for both countries, and a number of whom continued in off the field roles during and after their playing careers. Hearne’s eldest son, Thomas Hearne, junior, became Ground Superintendent at Lord’s, and his second son, George, was for many years Pavilion Secretary at Lord’s, and Tom senior was very proud of the success gained in the Kent eleven by his three nephews G.G., Frank and Alec Hearne.

Hearne was a right-hand batsman who also bowled medium pace. His first-class debut did not come until he was over 30, when in 1859 (the year this lithograph was published) he played for the United team against the All England Eleven at Lord’s when he made 62 in a first wicket stand of 149 with Robert Carpenter, acknowledged as one of the best batsmen in England of the mid-century.

From the late 1850s until his retirement from the Middlesex eleven in the 1870s he played regularly in the best matches, proving himself a first-rate bat, and by no means a bad bowler. One of his best innings was 122 not out for Players against Gentlemen at Lord’s in 1866. He was in particularly good form that year, and largely helped to place Middlesex first among the counties. Against Surrey he scored 146. His career as an active player terminated in 1876, when he had a stroke causing paralysis. He made a remarkable recovery, however, and for more than twenty years afterwards kept his post as chief of the ground staff at Lord’s, only resigning after the season of 1897.

A photograph of Hearne taken circa 1895 when he was Superintendent of the Lord’s ground staff bears a remarkable, albeit more mature, resemblance to the young cricketer in the lithograph. The artist, John C Anderson, appears to have caught a very good likeness.

Hearne was one of the first English cricketers to play in Australia when he was part of the first ever tour of Australia by an overseas team. The idea for the tour came from the English proprietors of a Melbourne company called Spiers and Pond which ran the Cafe de Paris in Bourke Street. Felix William Spiers and Christopher Pond through their representative in England, a Mr Mallam, had first tried to interest Charles Dickens in a lecture tour of Australia and New Zealand, without success. Instead the partners, noting the success of an English cricket team touring North America in 1859 and the growing interest in cricket in Australia, decided to attract a team of leading English cricketers. Mallam negotiated for twelve players, including Tom Hearne, to tour Australia the following winter (Australian summer) for £150 per man plus expenses. The team was captained by H H Stephenson and included players from Surrey, Middlesex, Kent, Yorkshire and Sussex; not the best team England might have mustered, nevertheless a good representative side. Certainly, good enough to triumph against the sides they met in Victoria, NSW and Tasmania, only being defeated twice in the 15 matches they played.

Fred Lillywhite, publisher of the lithograph, was a sports outfitter and cricketing entrepreneur from a notable cricketing dynasty. Born in Hove, Sussex on 7 July 1829, he was the third son of William Lillywhite who bowled for Sussex. An older brother John (1826 - 74) was a batsman and umpire, and his cousin James Lillywhite (1842-1929) captained England in the first test match played against Australia in Melbourne in 1877. In 1848 Fred Lillywhite produced the first edition of The Guide to Cricketers (popularly known as ‘Fred’s Guide’) which continued publishing until his death in 1866. It can be said to be the forerunner of Wisden Cricketers’ Almanac which was begun by John Wisden in 1864, and in a further interesting connection three members of Hearne’s extended family were later named as Wisden’s Cricketer of the Year.

Who would have guessed that this print of an English cricketer would have such an interesting connection with Melbourne, that its subject actually played just a kilometre from Fairhall.

This article was originally published in fairhall, issue 28, November 2019, pp 25.