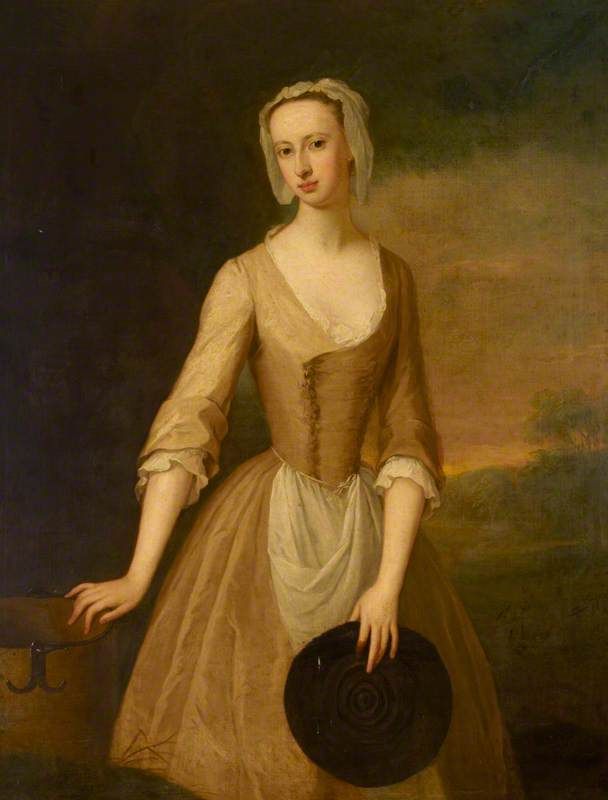 Fashions in the 18th century reflect an era shaped by political and industrial revolutions as well as expanding global trade. There was a growing demand for clothes in all levels of society with clothing being one of the most visible forms of consumption, a sign of collective prosperity and a visible marker of social status.

European visitors to England in the second half of the 18th century were surprised to find the labouring poor relatively well dressed, writing in their letters of a farmer’s wife ‘clad on Sundays like a lady of quality’ and of country girls wearing chintz bodices, straw hats on their heads and scarlet cloaks on their shoulders. Comment was made on the wearing of shoes and stockings, the good quality of the clothes, the wide range of fashions and how fashions crossed social barriers - females of all ranks wore hats which differed less in fashion than in the materials they were made from. The working man’s round hat became popular with the male gentry whilst the working woman’s apron became part of fashionable elite dress for a short period in the early 18th century.

Later in the century, with the emphasis on modest dressing for even wealthy women, white aprons became part of informal dress whilst straw hats were worn outdoors. However, the gentry took a dim view of lower-class women, especially servants, copying their fashions and dressing above their station, bedgowns being of particular note. A front wrapped thigh-length short gown worn with petticoats at home by genteel women it became the staple upper garment of working-class women in the late 18th century. Clothes worn by ordinary people were the subject of newspaper articles and satirical prints with denunciations of inappropriate finery among the poor. In 1761 The Annual Register recorded that ‘dress, fashion and affectation have put all on an equality … it is difficult to tell the milliner from her ladyship, my lord from his groom …”

Clothing for the common classes was a way to obtain respectability, despite limited disposable incomes, by keeping a minimally decent wardrobe with at least two complete outfits; usually the better one was associated with leisure, pleasure and religious observance being kept for Sundays and holidays. Their clothes were neither strictly functional nor resistant to fashion as to a large degree working class men and women wore styles very similar to those worn by the gentry when in the country. Women would wear a shift, which was also worn at night, a petticoat and a gown with detachable sleeves, though later in the century bedgowns became more popular as did the wearing of the petticoat with a jacket - another garment which morphed into genteel fashion. Also worn, as essential items of appearance, would be a handkerchief around the neck, an apron to protect their clothes whilst working indoors and out, stockings, a cap to wear indoors and a hat and cloak for outdoors.

If stays were worn, they were usually made of leather fastened with ribbons, scarlet being a popular choice, or stout canvas and split reeds. Stays were worn by all classes though for working class women they did not entail restriction of movement or breathing. Whilst ideal for displaying the latest fashion to best effect, stays were also worn for comfort and practicality providing an extra layer of warmth around the middle and remained clean being worn over the shift. A man’s wardrobe was simpler – shirt, breeches, often made of leather, waistcoat and a heavy wool coat were the usual attire along with a handkerchief, stockings and hat. Boots and shoes were made of leather, though women might also own shoes with uppers made of worsted stuffs. Wigs were worn by labourers, farmers, weavers and shopkeepers until the 1770s when they became no longer fashionable.

Until the late 1700s shifts, like summer gowns, aprons and men’s shirts were made of coarse light brown linens woven from flax or hemp whilst other items were generally made from flannel or dark wool fabrics such as camblet, patterned worsteds and silk-worsted mixes - winter gowns and petticoats were often padded. Gradually colourful printed cottons became the material of choice for gowns, waistcoats and neckwear with plain cottons more likely to be used for petticoats and cotton also replacing worsted for stockings. In the 1770s to 1780s cotton and linen gowns were of much the same price but the attraction of cotton, for working class women was the superior quality and appearance - the fabric being lighter and of a better colour. However wool fabrics continued to be used for coats and cloaks whilst linen remained more popular than cotton for shifts and shirts being a more practical and sturdier fabric when it came to frequent washing. Regular changes of linen undergarments were seen as a more effective way of keeping the body clean than bathing whilst not wearing linen could cause fevers and skin disease. The making of shirts for husbands and brothers was one of the many household tasks common to women of all classes.

By 1815 industrialisation had made muslin affordable to everyone, especially for shifts and shirts, though not always to general approval – in Jane Austen’s Mansfield Park the housekeeper is praised for turning away two housemaids for wearing white gowns. Female household servants in London were more likely to buy fashionable clothes, especially elaborate hats, than their country counterparts. Sadly, for many a lady’s maid, desire often resulted in an appearance at the Sessions court accused of robbing their mistress’s purse in order to buy costly fashion items. Ladies’ maids often benefitted as the recipients of unwanted or unfashionable items whilst clothing was given by most employers as part of a female servant’s wage.

The 1768 to 1794 account books of the Yorkshire Heaton family record the buckles, buttons, hats and lengths of cloth and lace bought on the Heaton’s credit by their female servants - 86% of their wages was spent with the local shops or travelling salesmen. At the end of the term of service most female servants left with the items that they had acquired. Male servants were usually given clothing - coat, waistcoat, breeches and hat being standard livery - as well as their wages though they were expected to buy their own linen, stockings and shoes. Clothes were offered to their workers by factory owners in order to encourage production whilst items of clothing appeared at fairs - a lace and be-ribboned shift was the prize for the winner of a donkey race at the Eccles Wakes in 1808, whilst steel buttons were prizes at a nearby fair in Colne, Lancashire. Clothing was often supplied to tenants by their landlords in times of hardship and for the very poor and needy it could be obtained from charities such as The Dorcas Society or from the overseers of the poor as parish relief.

However, for most working-class families clothing, both new and second-hand, could be bought from travelling salesmen and pedlars in rural areas as well as from the many small businesses providing a living for numerous people in even the smallest of towns – weaving cloth, lacemaking, hosiery, hat and glove-making as well as the making of clothes by tailors and seamstresses. With the wide variety of styles, colours, patterns and materials available from the 1760s it became unusual for working class households to make the cloth for their clothes or even to make clothes out of bought cloth. For those living in London whole streets of shops, such as Monmouth Street, offered ready-made (often ill-fitting) garments and second-hand clothes alongside small workshops making bespoke garments.

For those who could not afford new clothing there was a vibrant second-hand market which opened up fashion, practicality and style as well as functionality to both rural and urban consumers. Theft of clothes and clothing material to supply these street markets was common in London and large towns and was one of the most prosecuted offences in 18th century criminal courts. In the Old Bailey indictments of 1785 five silk gowns (average value 16s 10d) and 17 cotton gowns (average value 8s.) had been stolen from working class owners. Rachel Toms, a Whitechapel mantua maker had a blue satin gown stolen from a trunk at her lodgings whilst she was at work in 1770, whilst prized accessories such as silk handkerchiefs, silver and steel shoe buckles also found their way to market stalls.

Losing clothing and accessories could be a disaster as items might need to be pawned in times of need, especially the more expensive and stylish pieces of women’s clothing. In the late 1770s Georges Fettes of York was issuing between one hundred and fifty pledges a week, in one four-week period pledges were made on eleven silk gowns (average value 4s. 5d), twenty cotton gowns (average value 3s. 11d) and fourteen worsted stuff gowns (value 2s. 5d.). It would appear that while many items were redeemed, remaining items were sold by the pawnbroker to other working-class families, second-hand dealers and to parish vestries for clothing their paupers.

Apart from their clothing working class men and women had few other possessions and it was on their clothes that their consumer expectations focused especially in young adulthood. Apprentices saved to buy fashionable coats, serving maids exhausted their wages buying printed cotton gowns or the large metal buttons fashionable in the 1780s. However hard times might lead to those same clothes being pawned, sold or worn to rags, whilst periods of high wages and full employment led to dressing well in ways that drew on the fashions of the gentry.

As early as 1763 The British Magazine noted ‘the present range of imitating high life hath spread itself so far among the gentle folks of low life, that in a few years we shall probably have no common people at all!” Later in the century whilst many of the gentry still looked unfavourably on these fashion aspirations, others argued that they could lead to more socially accepted behaviour in the lower classes – ‘a necessary evil, an incentive to labour and a spur to refinement”.