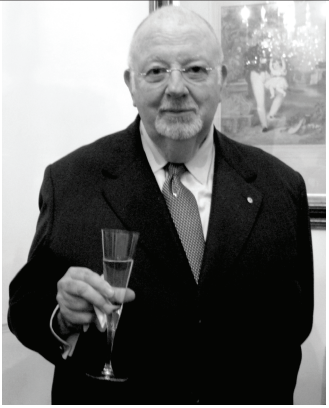 Mr. Hazell was born in the Cathedral parish of East Melbourne. Through the wartime years he served as an altar boy at St. Patrick’s Cathedral and in time found interest in church liturgy, Gothic Revival architecture, and the work of civil engineer and architect William Wardell.

Mr. Hazell completed his final year at Parade College, East Melbourne in the class of 1954, having passed his Leaving in English, French and British History in 1953.

Following his graduation with BA (Hons) from the University of Melbourne, Mr. Hazell had two principal stages in his professional life.

He worked for nearly two decades as Protocol Officer at the University of Melbourne, a type of aide-de-camp to the Chancellor and maintained a liaison with other colleges, teaching hospitals around Melbourne, and acted as secretary to appointment committees at senior level staff appointments.

In the 1970s and 80s, Mr. Hazell involved himself closely with many of The National Trust of Australia (Victoria) activities as a Board member, and as chairman of their Classification Permits and Acquisitions Committee.

Mr. Hazell is indelibly linked to local Catholic culture and its history. His extracurricular work efforts include Vice President of St Paul’s Home for the Aged since 1987, Assisi Centre for the Aged of Melbourne since 1986, and Honourable Secretary of the Melbourne Diocesan History Commission since 1974. Fluent in the language and culture of Italy, Mr. Hazell held the role of President of the Dante Alighieri Society of Victoria for 27 years, since 1978.

Mr. Hazell was awarded an Officer of the Order of Australia (AO) in 1999 for services to multiculturalism, the arts, the Catholic Church in Melbourne and the community. Confirming Mr. Hazell’s devoted passion for place and people, he was courteously recognised through international awards of recognition by the Italian, Russian and Maltese governments. He was awarded the Cavaliere Ufficiale della Ordine al merito della Repubblica Italiana, Knight Commander of the Order of St Anna (Russian Federation), Knight of Magistral Grace, Pro Merito Melitensi (Order of Malta) Knight, Equestrian Order of the Holy Sepulchre of Jerusalem, Knight Grand Cross Order of the Eagle of Georgia, Knight Grand Cross Order of St. Michael the Wing of Portugal and United Nations volunteer medal.

Mr. Hazell will be remembered by us for his contribution to The WR Johnston Trust, especially his early work establishing our long-term relationship with Government House, Melbourne that has held the Trust in good stead.

This article was originally published in Fairhall, Issue 22, October 2017, pp 37.