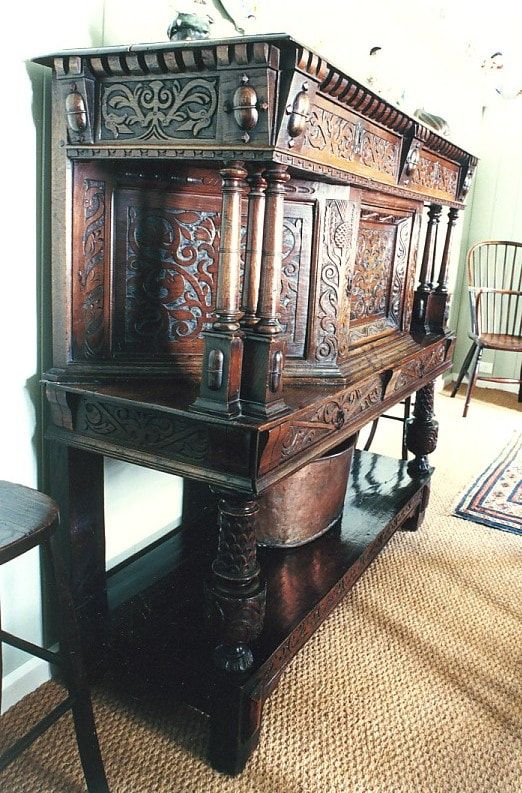 In The Johnston Collection, usually located in the kitchen, is an oak cupboard carved with foliate decorations which include the Scottish thistle.

This is described as a court cupboard and the thistle decoration nicely links it with Johnston’s English/Scottish heritage on his father’s side.

The thistle motif has appeared in English art since Anglo-Saxon times. As it is a Scottish symbol, its use may reflect an affection for Scotland. This was fuelled in the 19th century by the novels of Sir Walter Scott and particularly in the British Royal family following Scott’s retrieval of the long-lost Scottish crown jewels and his orchestration of King George IV’s brilliant visit to Scotland. Queen Victoria and Prince Albert also loved Scotland, purchasing Balmoral Castle for their annual Scottish holidays.

The word “court” in court cupboard rather than referring to a royal court, is the French or Norman word meaning “short”. The word “cupboard” is derived from its origin as a cupboard, an open shelf or shelves on which cups or eating vessels were stored. The cupboard evolved into a court cupboard, inspired by an earlier French design. It was one of the three most important pieces of furniture between 1550 and 1675, the others being the tester bed and the great chair.

At this time England was enjoying a time of relative peace and prosperity. Following the dissolution of the monasteries (1536-1539), a new class of landowners emerged, building houses on the now privatised monastic lands. With greater wealth came a desire for better furniture design. Furniture craftsmen, called joiners, employed a new construction method, the panel and frame technique from Flanders, to satisfy this demand. Oak, then the main timber used for furniture, has a tendency to split when nailed or pegged, especially if it is poorly seasoned. Now, oak panels were fitted into grooves worked on the inner surface of frames secured by a mortice and tenon joint. The tenon or projecting member, fitted into the mortice or socket, fastened by pegs. This reduced splitting as it gave the panels more freedom of movement.

Elizabethan court cupboards were carved with more elaborate details than their Jacobean counterpart and by the start of the 17th century. were supplanted by the alcove cupboard or buffet and by the long side table or sideboard table. The Johnston Collection cupboard is reminiscent of court cupboards made in Elizabethan times. It has three shelves and is decorated with shallow carved thistles and scrolled foliage. The bottom shelf is open and is flanked with carved bulbous baluster supports on each side. The middle shelf contains a full-width shallow drawer and supports a central canted cupboard with a cluster of three free-standing turned columns on each side. The top shelf has two narrow drawers.

The Johnston cupboard was purchased in 1933 as a genuine 17th century oak buffet. Recently it has been dated Victorian, circa 1870 with perhaps some earlier elements. Even more recently, it has been suggested, that the cupboard is 1920-30 made for the then fashionable ‘Stockbroker Tudor’ houses. It would be interesting to hear further opinions.