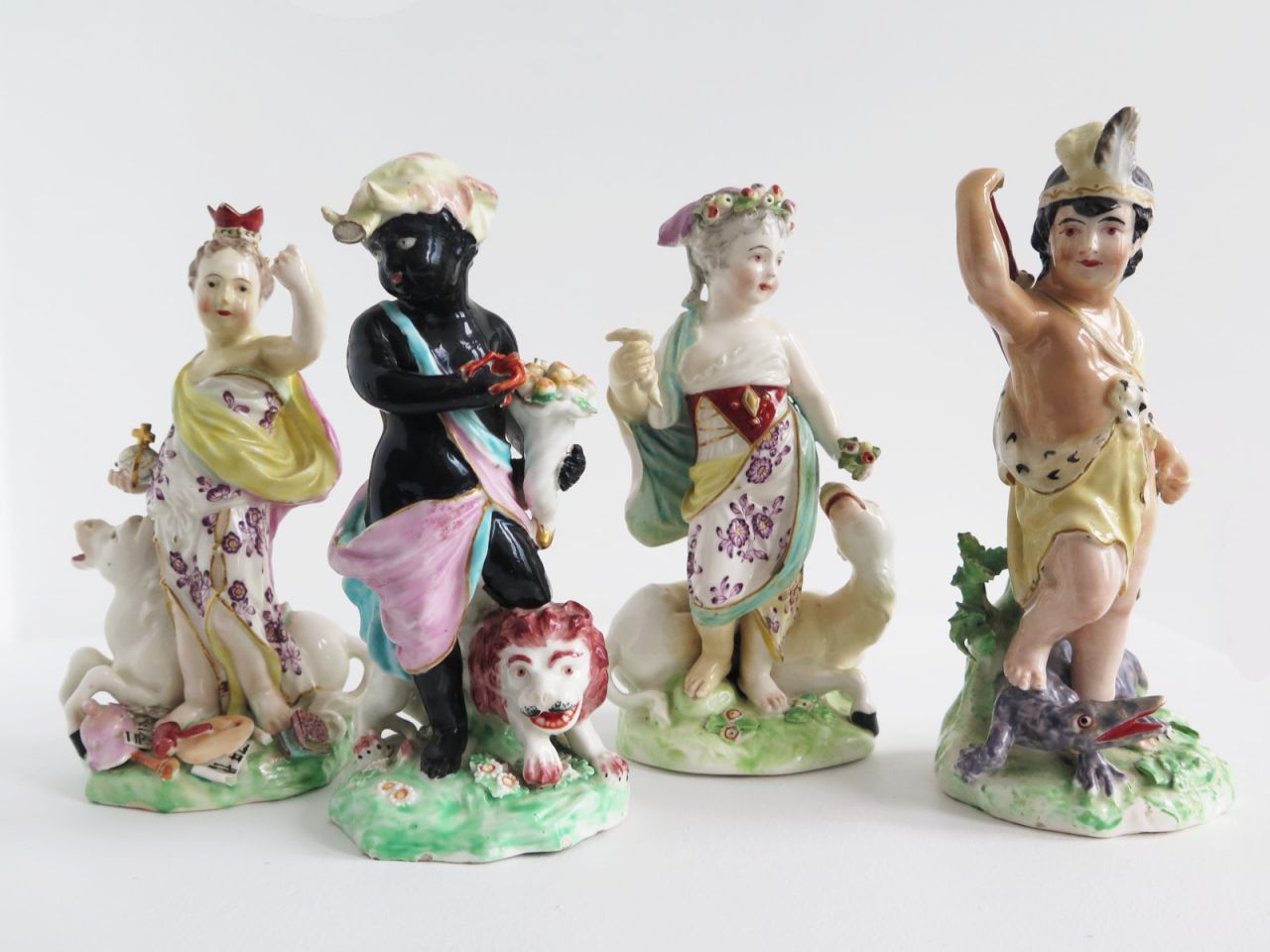 The four small figures of the continents, recently acquired through the Nina Stanton Bequest, raise some interesting questions. Why are they personified as women, and when did this representation begin?

Like so many queries on the significance of subjects in art, the answer is to be found in Hall’s Dictionary, which places the tradition firmly within the religious upheavals following the Reformation, and the spread of Christendom across the known world by missionaries, notably the Jesuits.

The major patron of painting and sculpture was always the Christian Church to whom artists looked for commissions, and hence the main subject matter of images was stories and legends within the Catholic canon. The attributes of Christ, his mother, and an increasing number of saints were part of well-known artistic traditions. For later ideas generated by travels across the four continents, and the visual representation of them, a pattern book was required. This was drawn up by Cesare Ripa (Italian, circa 1560-circa 1622) who worked in the household of Cardinal Anton Maria Salviati, reputedly as a cook and butler, and whose real name was Giovanni Compani. Although not a scholar, his one published work, allegedly written in his spare time as majordomo, is the Iconologia, first published in 1593. The first edition was not illustrated, and was arranged alphabetically by subject for easy reference. A second edition appeared in 1602, and another in 1603, illustrated with woodcuts. From this date, all editions were illustrated, whether published in Italy, France and eventually in Germany in 1658-60.

In 1603, The Four Parts of the World - the continents - were listed under the heading Mondo [The World]. World was described as a man showing the strength of the world through his forceful stance, then depicted as Pan. Asia, a woman, was crowned with a garland of flowers, and clothed in a garment ornamented with gold, pearls and other jewels. Ripa described the Camel as the most appropriate animal to represent Asia, and cassia, pepper and cloves to be carried.

Africa was represented by una donna mora [Moorish] almost nude, wearing a coral necklace and holding a scorpion in her right hand. She is dark because of the closeness of the sun’s rays in Africa, and has a helmet in the form of an elephant’s head. A ferocious lion, vipers and other venomous snakes are part of her attributes. Her left arm supports a cornucopia filled with grain stalks, representing the fertility of the country. By 1758-60, the German edition of the Iconologia had replaced the female figure with a male, with feathers on his head and around his waist and calves. Animals included an ostrich and a parrot.

America is another nude woman with a dark complexion – a yellowish hue [di color mista] – has sparse hair and is tattooed in various colours. Ripa had no classical sources for his description, so drew on accounts of travels in Middle and South America, well-known in Catholic Europe. She grasps an arrow in her right hand, and a bow in her left. At her feet is a rather tame looking alligator. There are references to human parts including an arm and either a head or some hair on poles. In the German edition, the personification has become male, a native chieftain heavily tattooed, with a headdress of feathers. His animal attribute is either an iguana or an armadillo.

The figure of Europe draws on classical personifications of the goddess of Rome or on Minerva, the goddess of wisdom. She is clad in a garment described as Regale. She is seated on intertwined cornocupie, rather like an Italian X-stool, and these are filled with fruit, grain, and black and white grapes. She wears a royal crown, indicating in accordance with Ripa’s text, that Europe is always the superior continent and queen of the whole world. A small round temple is supported by her right hand, rather reminiscent of the Temple of Vesta in Rome. This is to signify the ‘most holy and Catholic Christian faith’, for at her feet are depicted coronet and the papal triple crown which Ripa’s text described as the ‘perfect and most truthful religion, and superior to all the others’. A heap of boxes contain moneybags, a reference to commerce and banking, for which certain Italian families were famous [and infamous].

The Iconologia is now considered a primary source for Baroque iconology, but after the end of the Baroque era, it gradually faded from view. Representations of the four continents carried on from extant examples in the fine and decorative arts, and evolved according to current taste and the demands of patronage. This continued in England in the enormous Albert Memorial in Kensington Gardens, erected by a mourning Queen Victoria in memory of her husband.

Australia, the fifth continent, was known to exist by 1770, and it is amusing to speculate how such representation might have evolved. A kangaroo is almost certain, but not the platypus, since the first skin brought to England was deemed to be a fake. Instead, we have ended up with a coat of arms in which the kangaroo and the emu replace the British lion and unicorn. Some sort of progress, one assumes.