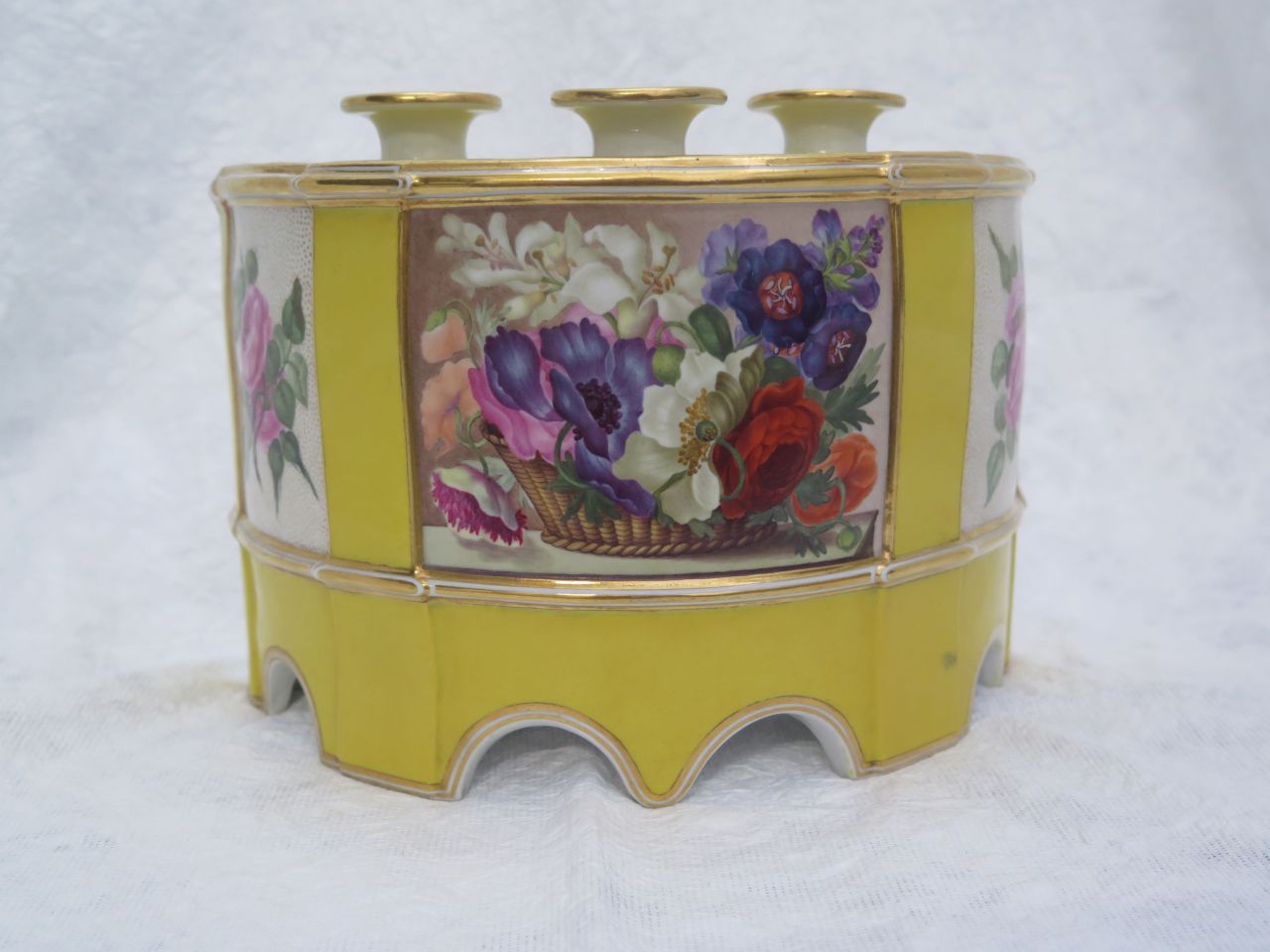 In 2015 I wrote in Fairhall 14 about an unusual flower container in Victoria & Albert Museum, London – a tulip vase (C.96 to J-1981) in the shape of a tall pyramid. Although The Johnston Collection does not hold such an object, there is another specialised flower container, a Cantonese exportware bough pot.

Now, thanks to a generous bequest from former Director | Curator Nina Stanton, there is a second, quite different, bough pot. Nina’s bequest was for the acquisition of fine 18th century porcelain, of which this very desirable, fashionable object is an excellent example.

This circa 1797-1804 flower container is of demi-lune form with arched feet. It is divided into three panels by columns of the ground colour – a strong yellow. The central panel is painted with a basket of mixed flowers and the flanking panels each feature a spray of pink roses on a gold stippled background. The cover has eleven evenly spaced small holes and three slightly larger protruding tubes. Gilding highlights the rims. The Victoria & Albert Museum holds several examples of comparable size and record that they were used to arrange flowers and branches in the hearth during the summer months when the fireplace was unused. An alternate view is that they were designed to sit on a mantlepiece, however they would be equally at home on a small table against a wall. These flower containers have also been variously called root pots, bouquetieres and flower stands.

The base is inscribed ‘Flight and Barr Worcester Manuf to their Majs.’ Worcester was one of the best English porcelain manufacturers, their wares acquired by the highest in the land. In 1783 Thomas Flight bought the works for his sons Joseph and John, beginning the ‘Flight’ period during which the formula for the paste was modified and a neoclassical style introduced. In 1793 Martin Barr became a partner, with the business becoming Flight and Barr until 1807 when the inclusion of younger members of the Barr family saw the name changed to Barr, Flight and Barr (1807-13) and Flight, Barr and Barr (1813-1840).

Worcester expert John Sandon suggests that Flight and Barr examples of bough pots are rare and comments on the richly coloured grounds of some examples, particularly the wonderful yellow. He also notes that they follow a simple panel form with a flat cover and fine decoration, all of which are seen in the TJC example.

As with the tulip vase, there is sometimes conjecture about whether bough pots were made to display cut flowers or to grow flowers from bulbs suspended in water. They could in fact be used for either purpose though I would suggest that those pots with covers with both plain small holes and larger holes in the form of protruding tubes were for bouquets of mixed flowers. Whichever may be the case the following passage from Victorian gardening writer Shirley Hibberd (1825-1890) in 1856 and quoted in a press release for the 2010 exhibition A Garden Within Doors: Plants and Flowers in the Home at London’s Geffrye Museum, sums up the place of flowers in the home.

“It would be rather a difficult matter to sum up all the social qualities of flowers. Do we not always feel welcome when, on entering a room, we find a display of flowers on the table? Where there are flowers about, does not the hostess appear glad, the children pleased, the very parrot garrulous, at our arrival; the whole scene and all the personages more hearty, homely, and beautiful, because of those bewitching roses, and brugmansias, and pavonias, and mignonette? Assuredly, of all simple domestic ornament’s flowers must have first place.”

And it is not just living flowers that beguile the viewer: those decorating an object can be expected to engender the same feelings, particularly when the real thing is in short supply. Flowers in the painted basket on this pot include tuberose, sweet pea, campanula, opium poppy. Even when empty of flowers, the image of highly perfumed sweet peas and tuberose could evoke the spring and late summer when these beauties were blooming.

Simple in form, lush in decoration, this elegant example of Regency taste is a wonderful addition to The Johnston Collection.