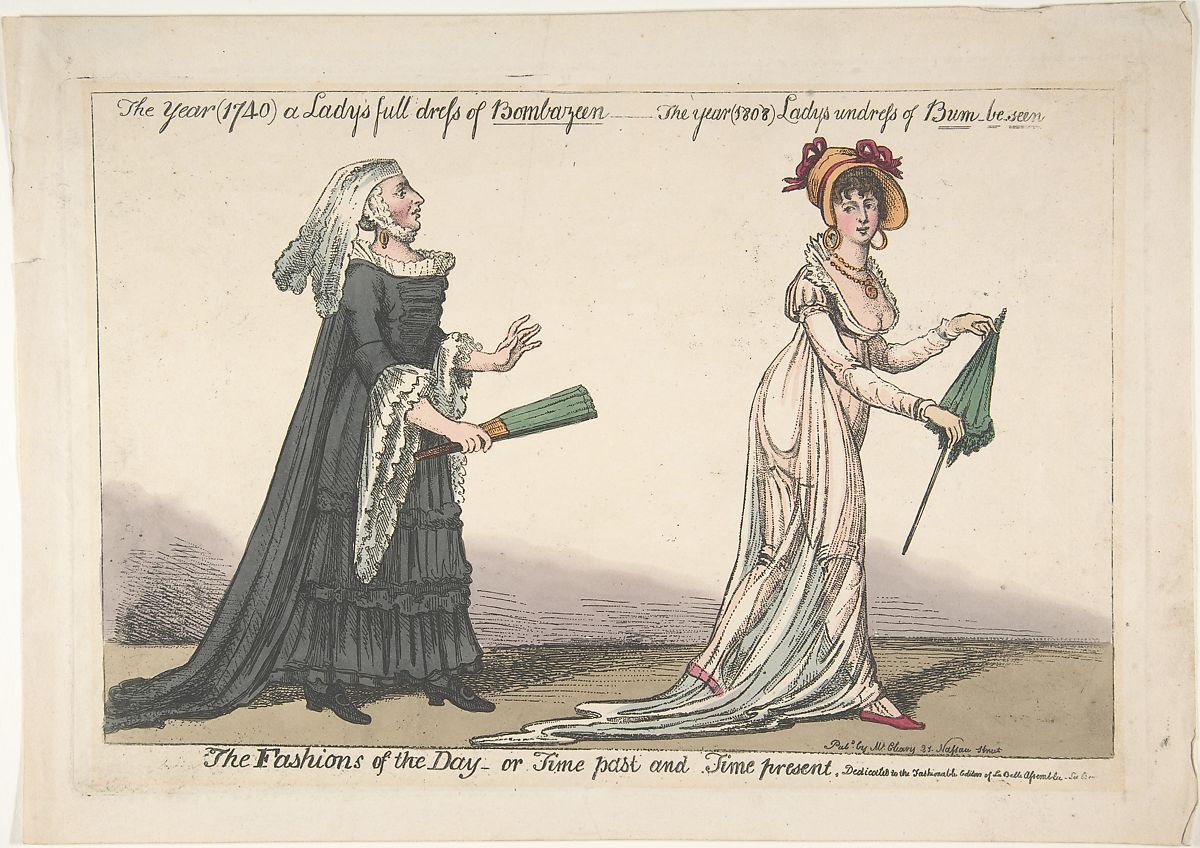 Cosmetics continued to be popular into the 19th century; the Prince Regent and his friends wore face powder and rouge, oiled their hair and drenched themselves with flower scented perfumes, but a greater proportion of wealthy men were turning to a more natural look reflecting the influence of Beau Brummel and the Napoleonic Wars.

Washing daily or bathing in a tub with hot water became more accepted, though pastes and moisturisers were still used to heal or hide blemishes and scars. Upper class women also washed and bathed more often and used cosmetics sparingly, a vegetable rouge being the exception, to preserve their natural appearance and not spoil the classical look. Heavy application of cosmetics was considered fast and unbecoming, associated with harlots and common folk whilst some critics went as far as associating cosmetics with foolishness. Lighter face powders were made of rice powder, but harmful substances continued to be used – popular pearl powder was made from sub– chloride of bismuth and French chalk or from pearls dissolved in acid. Lips were coated with a clear pomade of beeswax for shine and to protect from the elements or contained dyes of crushed flower or carmine to discreetly accentuate lip colour. The best cosmetics were imported from France but as they were expensive and heavily taxed most cosmetics continued to be bought from the local apothecary – Taylor Brothers of Cavendish Square was a fashionable London apothecary and vendor of cosmetics. Everything from almonds to violets were used resulting in a rouge labelled ‘Liquid Bloom of Roses’: for the complexion ‘Royal Tincture of Peach Kernels’ or ‘Carnation of Lilies’ were popular, as was Olympian Dew for bathing the eyes. One recipe recommended the juice from a green pineapple to ‘take away wrinkles and give the complexion an air of youth’.

Natural complexions, doe eyes and rosebud lips gave way to the Romantic period when many of the beauty icons of the day were depicted as skeletal thin with ghostly pale skin, glistening eyes, flushed cheeks and perpetually red lips. Tuberculosis provided a woman with these features throughout the natural course of the disease so to have the disease became fashionable with deadly consequences. If a lady wasn’t fortunate enough to suffer from such a glamorous illness, she could feign going into a decline – the desirable fragile look being simulated by drinking vinegar and dropping belladonna into the eyes. The thin, delicate even fragile woman was widely portrayed in art and literature, e.g. Edouard Vienot’s portrait of Marie Duplessis who died of tuberculosis aged twenty–three in 1847. A Parisian courtesan Marie’s life loosely inspired Alexandre Dumas’ novel La Dame au Camelias and Verdi’s opera La Traviata.

The early Victorian period was marked by class consciousness and a strong moralistic view of women, well–bred women were expected to remain in the home and do no physical work. A pale complexion was associated with a superior hierarchy of beauty, any hint of suntan or muscle tone bore hallmarks of the working class whilst over– use of cosmetics was frowned upon, being strongly associated with actresses and prostitutes. Many Victorian cosmetics continued to contain damaging products such as the lead–based Liquid Pearl “which were used to achieve as pale a complexion as possible. Many wealthy women also digested arsenic, chalk, ground slate and tea leaves to maintain their pale complexions, often with fatal consequences. The one acceptable cosmetic used by the upper and middle classes, in the most discreet way, was face powder, which was made of lightly coloured starch, milk of magnesia, rice powder, French chalk or Venetian talc. Crème Celeste had become popular by the 1850’s, made of white wax, spermaceti, sweet almond oil and rosewater. It was applied before the face powder, moisturising the skin whilst hiding blemishes.

A smear of castor oil over the lids attracted light to the eyes which could be enhanced with a little light brown eye shadow, whilst eyebrows were plucked in a natural arch. Belladonna was used to treat cataracts whilst freckles, thought of as unattractive, could be removed by rinsing the face in lemon juice or rubbing with carbolic acid. Sleeping with a slice of raw beef or any other kind of animal fat was believed to restore youthful suppleness to the skin whilst a light diet was recommended to reduce pimples. Charcoal could be used for cleaning teeth and toothache eased by sucking cocaine lozenges easily obtained from pharmacies, as was laudanum which was equally fashionable and addictive. Homemade products were still popular with directions for face creams and flower– based toilet waters frequent additions to ladies’ magazines – flowers boiled in water produced an effective face wash whilst sugar scrubs cleaned the skin. However, more and more beauty products were available for purchase – Yardley was established in 1823 having bought out the Cleaver family which had been making toiletries in London since 1770. Guerlain began production in Paris in 1828 and soon their products were being exported to England.

In the 1830’s the ideal shape for women was a long slim torso emphasised by wide hips. Upper class women wore a tightly laced corset over a chemisette, up to six layers of petticoats, often supported by unhygienic horsehair padding to give the fashionable beehive look and then a tightly fitting bodice worn with a heavily embroidered and trimmed skirt. Middle class women were similarly attired though with less extravagant detailing. The horsehair was replaced in the 1850’s with the cage or hooped crinoline made from steel rings suspended from fabric tapes which freed women from the heavy weight but presented its own danger. Nineteenth century doctors pontificated and newspaper articles highlighted the way women’s fashion harmed its wearers from the increased number of deaths caused by lighter fabrics – muslins in particular – catching fire when brushed against lit candles or open fires, to hooped skirts which affected spatial distancing. Stepping too close to a fire grate could ignite the material with the flames being fanned by the oxygen circulating under the skirts.

Curls were a popular hair style and early curling tongs needed to be heated in the fire, if left too long before applying the hair would literally burn off. Baldness became a common problem for fashionable women who used remedies such as applying ammonia mixed with water to stimulate re growth, though the result was more likely burnt skin and blindness. Other doctors made issue of the damage that could be done to internal organs by the tightly laced, boned corsets of the period which also caused muscle atrophy, leading to claims that a tiny waist could be safely achieved by swallowing a tapeworm to control appetite. This would be followed by swallowing a pill to kill the tapeworm, should that not succeed a metal tube was inserted into the patient’s throat to catch the tapeworm, though the patient was more likely to choke to death first.

At the other end of the fashion spectrum poor working girls lost their minds through coming into daily contact with mercury and nitrates whilst pulling rabbit fur to make hats for the wealthy, whilst factory workers, in adopting the wider fashionable skirts, found them to be a major health hazard when working on or near machines. However, it was the move from natural to chemical dyes that would cause the majority of problems for milliners, glove and flower makers to the women who wore the finished articles. Scheele’s Green was developed in 1778 from a mix of potassium and white arsenic poured onto a solution of copper. A deeper, chemically engineered shade, was synthesized in 1814, known as Paris Green in England, and became very popular for interior decoration – such as in wallpaper and paint and ornaments of decorated flowers and fruit. It was also used in the dyeing process of fabrics for clothes, silk ribbons for making artificial bouquets, leather for making gloves and shoes and in shawls, fans and bonnets, green being associated with femininity and nature. The chemicals reacted with moisture and unless the dye was properly fixed the arsenic could leach into the skin, through sweat and absorption, causing at least irritation and in larger doses a lingering, painful death. Despite this, fashionable women continued to wear green even after the dangers were widely known (skin ulcerations around finger nails from wearing green gloves were common) because for as long as fashion appeals to ideals of beauty and to vanity, enticing and delighting, it leaves many victims in its wake.