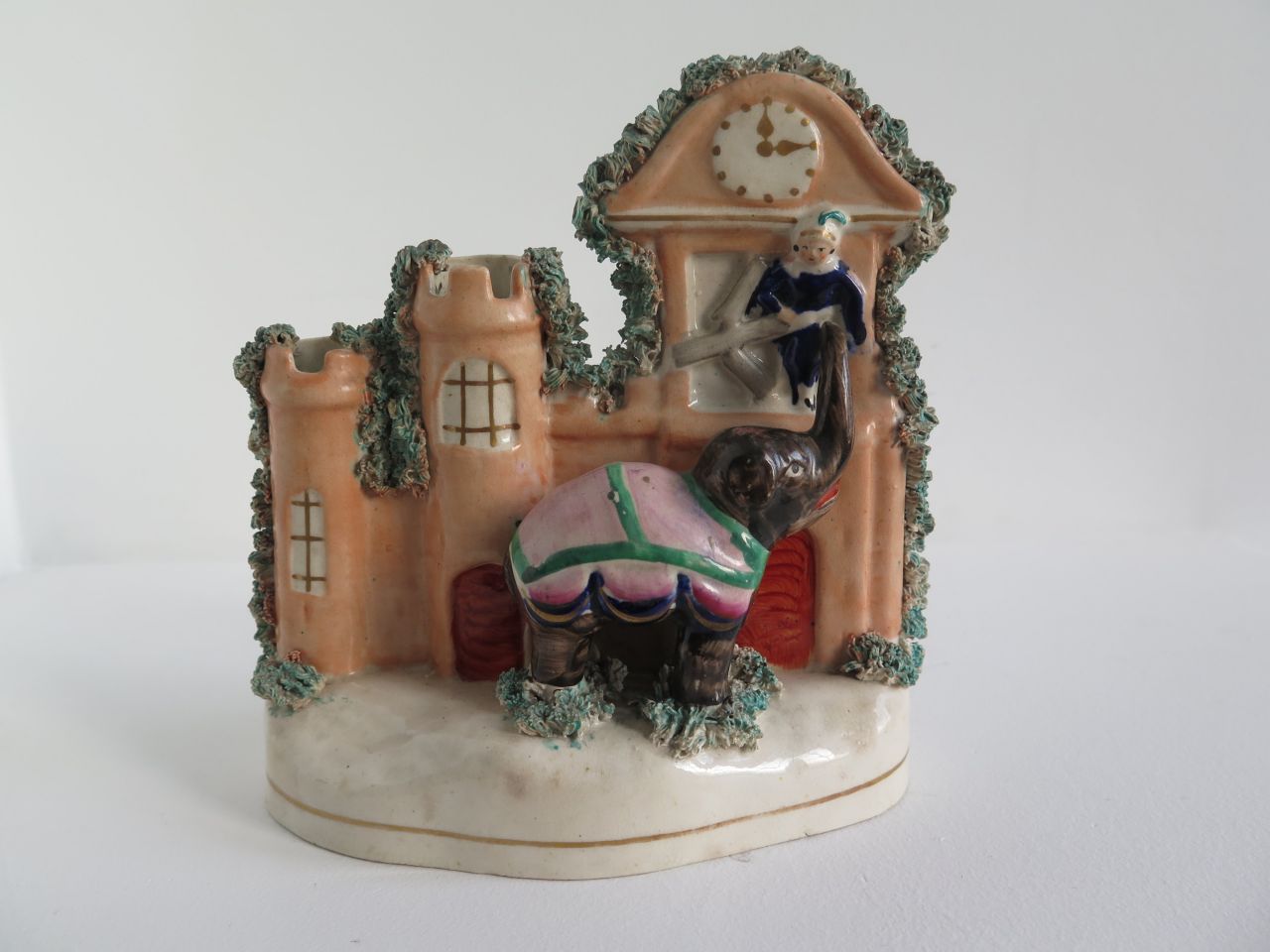 THE ELEPHANT OF SIAM AT WOMBWELL’S MENAGERIE: Prince Almansor’s Escape

Real news or Fake news? What is the true story behind the dramatic event depicted by this Staffordshire spill vase? In the 19th century, the public’s insatiable appetite for the weird and the wonderful was fed in part by the Staffordshire potters.

From the 1830’s onwards, they supplied a steady stream of modelled pieces reflecting contemporary interests and obsessions, especially for the exotic and dangerous East.

The scene captured in this piece came from a popular show originally performed at the Adelphi Theatre, London, 1829-30, and advertised as the New and Gorgeous Serio-Comic Indian Burletta Spectacle called The Elephant of Siam or The Fire Fiend in which the elephant wrenches the bars from Prince Almansor’s window and the prince slides down the elephant’s trunk to safety. It starred the celebrated acting elephant Mademoiselle d’Jeck, for which a stronger stage had to be built, and featured all the tricks the elephant could perform. She even took a curtain call. Kneeling on her forelegs, bowing gracefully with her trunk, and then retiring to great applause.

The famous menagerie owner George Wombwell (1778–1850), purchased the Adelphi script in 1830 and included it in his show which toured the country. Wombwell began his career in 1804 when he bought two boa-constrictors and eventually, formed a menagerie which became by far the finest travelling collection in the United Kingdom. He went from one large fair to another, and in 1820 staged the first acts performed by elephants. As mentioned above, by the end of the decade, London theatres began to mount similar oriental spectacles.

Wombwell’s achievements have wider importance however. The enterprising Impresario also had giraffes, a gorilla, a hyena, a kangaroo, leopards, llamas, monkeys, ostriches, panthers, a rhino, wildcats and zebras as well as six lions and three tigers. Indeed, as many of the animals from hotter climes died in the British climate, he could profitably sell the body to a taxidermist or to a medical school, or exhibit the dead animal as a curiosity to the public, who flocked to see it and poke at it. Over the years, Wombwell expanded to have three menageries that travelled around the country and was invited to the royal court on five occasions to exhibit his animals, three times before Queen Victoria.

Though Zoological Gardens emerged in several provincial cities in Britain during the 1830s, itinerant menageries continued to attract a broad range of visitors throughout the century and catered to sectors of the population who, owing to social class or geography, lacked easy access to static zoos. Ever expanding in scope, the travelling shows functioned simultaneously as a source of rudimentary zoological knowledge and a popular form of entertainment. Wombwell took the keenest interest in the welfare of the animals. ‘No one probably did more,’ said the ‘Times,’ ‘to forward practically the study of natural history among the masses’. Staffordshire pieces, such as this one, were popular contemporary souvenirs of many exciting and entertaining events and today they provide us with a fascinating and useful historic record.